What do these photos tell you about the kind of shelters they lived in?

House On The Q-T-5 Ranch

This photo shows the ranch house on the Q-T-5 ranch in Colorado. This two-story house was made of logs, with the spaces between the logs filled with plaster. The roof was made of wood split into shingles. The upstairs window can be seen above the back porch. The house was heated by a fireplace or by a wood-burning stove. 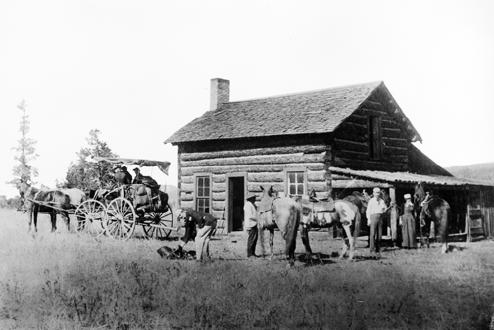 Many of the first farm and ranch houses in Colorado were built of logs. The logs came from trees growing along the streams and rivers or from pine trees chopped down in the nearby mountains. Log houses were cheap and easy to build.

"When the few scattered settlers in the region heard that Father was building a cabin. . . they came and helped him. This cabin was about eighteen feet long and fifteen feet wide. It was built of round logs and smaller logs were used for the roof. A large ridge pole was put across the logs where the walls were high enough and then smaller logs were laid on this ridge pole, forming the roof. . . . "The floors were made of rough boards from the sawmill. After much wearing and scrubbing they became smooth."

The house in this photo is a one-room log cabin on a farm near Craig, Colorado. The photo was taken about 1915. The men in the photo were digging a water well. 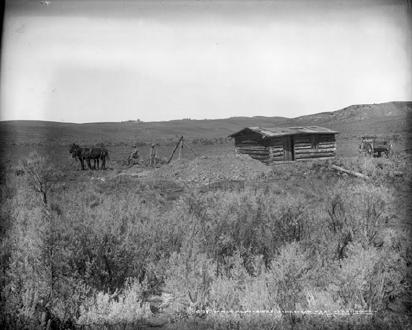 The log cabin in this photo was called a "claim cabin." Settlers were allowed to claim 180 acres of land owned by the Federal Government. The farm cost them nothing if they built a house, improved the land, and lived on it for 5 years. The family that claimed this land near Craig built a very small cabin. It was a temporary house that they could live in until they owned the land.

"We had a home-made table and a few broken down chairs which Father had mended. There wasn't much room for furniture but we always had a trundle bed which could be pushed under the big bed in the daytime. We had an iron teakettle, iron pots, iron skillets, and iron handled knives and forks. We had one kerosene lamp and some candles that Mother made out of tallow, but we seldom used either as the fireplace threw out enough light for the small one-room cabin. We could even read by the bright light from the pitch logs."

This is a photo of a sod house built by John J. Long near Sterling, Colorado. Mr. Long is standing in the center of the photo. His wife is seated holding their baby, Elizabeth. The photo was taken in 1889. 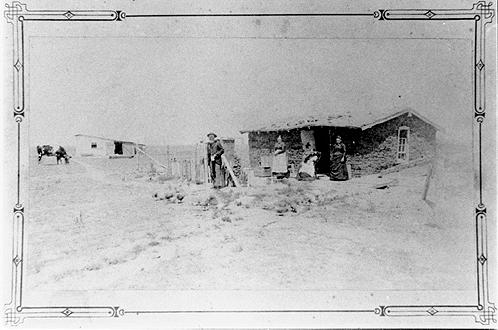 Logs and lumber were scarce and expensive on the treeless plains of eastern Colorado. Many of the settlers there built sod houses like the one in this photo. They cut strips of sod from the prairie, which they laid in rows to form the walls. Sod houses were cheap and easy to build.

"We had a good sod house and a barn in the side of a hill. We never went hungry and always had plenty of fuel to keep us warm. The Frenchman Creek crossed our land and there was a water hole that did not ever go dry. . . . The coyotes yelped at night, be we soon got used to their cry. I brought a great many flowers with me from Illinois, and they did fine in our sod house."

A Sod & Board House 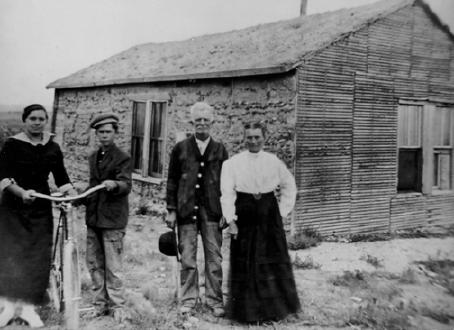 Most sod houses also had a sod roof. The roof in this house was made of wood covered with sod. A thick, sod roof helped keep the house cool in summer and warm in winter.

"The rafters ran lengthwise the building and the roof sheathing ran up and down the slope of the roof, from a wall plate to the ridge rafter. Tar-paper was laid over the sheathing and covered with the same type of sods which were used in the walls, laid with the grass side down. Although hailstorms ruined nearly every other type roof, which was used in the neighborhood, I never knew one of these sod roofs to leak during the fifteen or twenty years that the buildings remained standing."

The house in this photo was made of adobe bricks covered with plaster. This house may have been the home of two different families. 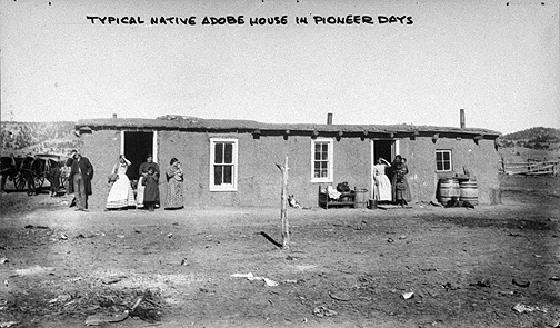 Most of the Spanish-American settlers in southern Colorado lived in houses made of adobe bricks. These were the kind of houses they had built in New Mexico before arriving in Colorado. The bricks were made of earth and straw hardened by drying in the sun. The outside walls were covered with plaster to keep the bricks from getting soft and crumbling when it rained.

"After a days travel over the arid plain. . . , we have arrived at the . . . Mexican [-American] town known as Culebra. . . . It contains only adobe houses, extending along for half a mile on either side of the road and all joined together. The adobe is made of a fine alluvial soil ground with water into a stiff paste. It is then moulded into forms about three times the size of an ordinary brick. These are baked in the sun for a few days, and then used for building. The walls of the houses are thick and only one story high."

An Adobe House Near Trinidad

This photo was taken in southern Colorado near the town of Trinidad. The house and chimney were built of adobe bricks covered with plaster. 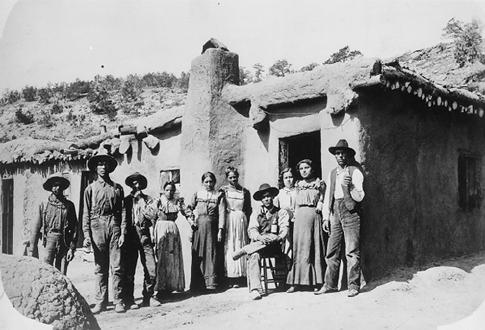 The roofs of adobe houses were made of logs covered with earth. If you look closely you will be able to see the ends of the roof logs on the right side of the photo. The earth packed on top helped keep the house cool in the summer.

"The roof [of the adobe house] is perfectly flat and formed by stretching poles across from wall to wall and covering them with the adobe. It never rains enough at one time to saturate these roofs and consequently they do not leak."

This photograph of a ranch house was probably was taken in eastern Colorado. It was a frame house made of lumber sawed into boards. The roof also was made of wood, which was cut into thin shingles. The house had a "factory made" screen door with wood decorations. 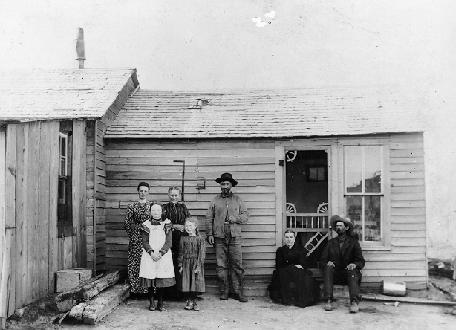 Most settlers on the eastern plains lived in frame houses before moving to Colorado. They thought of log or sod houses as temporary homes. They usually built a frame house as soon as they could afford to.

"Mr. Smith now [1872] had to go to work in the saw mills. There were three saw mills in Greeley making lumber for the houses that were being built. Logs were floated down from the mountains and made up into lumber and posts. Mr. Smith worked in the saw mill for three years."