What do these photos tell you about who posed in family photographs?

This family photo was taken near Trinidad, Colorado in the late 1800s. It includes the father, the mother, their daughter, and an older woman. 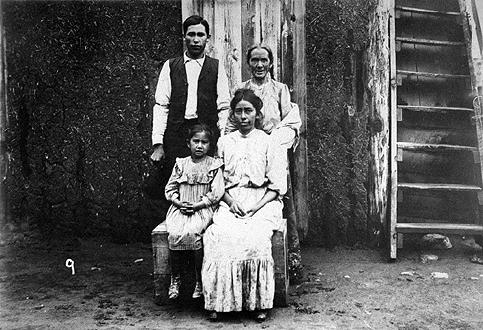 Families in the 1800s often included more than two adults. The older woman in this photo may have been the girl’s grandmother. Many households in Colorado at this time included an elderly parent who was no longer able to keep a separate home.

This family photo was taken on a farm in Colorado in the late 1800s. It shows the family’s house, outbuildings, and a team of horses hitched to a wagon. Photos of farm families often included the house and other family property. 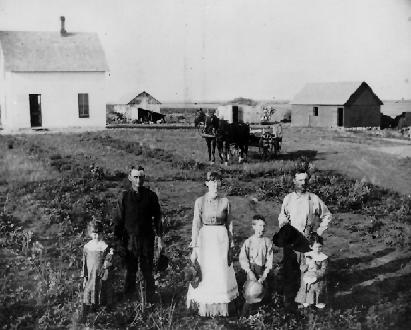 In addition to the husband, wife, and three children, this photo included a second man. He may have been a relative, but could also have been a hired hand. Men hired to help on a farm often lived with the family and were treated as family members.

“A dollar was a dollar in those days. We didn’t think anything even in my time of going to help build a house or going to help do some plowing. The going rates a lot of times was about fifteen dollars a month and sometimes less than that for a man to work on a farm from sunrise to sunset and get fifteen dollar a month and his board and room. That was the way wages were. Money wasn’t as necessary as getting some food, some clothing and so forth.”

This photo of the Brown family was taken in the late 1800s. It was taken at a photographer’s studio in Greeley, Colorado.

Having a family photo taken was a special event in the late 1800s. Many people went to a photographer’s studio to have their picture taken. There they chose a formal setting like the canvas backdrop in this studio. They dressed up to look their very best.

“My father was a foreman on the railroad, and he farmed too. My older brother and mother did a lot of the farming because that was the only way we could make it. . . . I don't remember any of the women ever working out [of their homes], only at potato harvest time. . . .”

This is a photo of W. A. Walters family. It was taken at their home in Wetmore, Colorado about the year 1885. 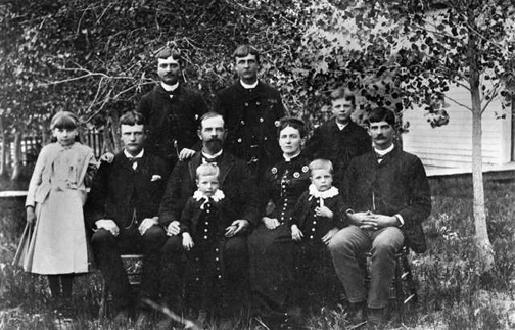 Large families were common in the 1800s. Mr. and Mrs. Walters had eight children, including seven boys and one girl. Some families had as many as ten or twelve children.

“[In large farm families] every child as they grew up was given a responsibility and they were held to that responsibility. I can remember that I had the chickens to take care of when I was . . . maybe four or five years old. . . . But we grew into our responsibilities, and each and every one was expected to do what they knew they should do. . . . ”

This is the I. A. Betts family, who lived in Wetmore, Colorado. The photo was taken about 1885 by a traveling photographer. His studio was the tent in which this family is seated. 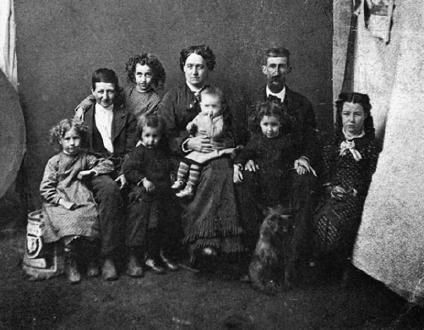 The Betts family included seven children. Families of this size were not unusual in Colorado in the late 1800s.

“We were never hungry. My son Nick will tell anybody, 'There was a lot of us. We might not have fancy clothes to put on, but we never went hungry, never.' He said, 'Even if we just had noodles mixed with fried cabbage or something, we ate it, and it was good' We'd buy bacon, big slabs, and I'd buy eggs from somebody until I got chickens, 10 [cents] a dozen. Oh, I fried bacon and put eggs over, and [we'd] have bacon and eggs. We always had enough to eat.”