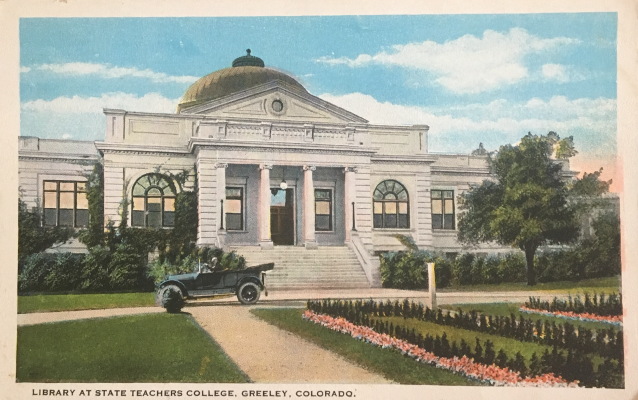 One cent. That’s all it took to send a post card in 1928; when UNC was still known as the Colorado State Teachers College and when milk cost 56 cents and gas was 21 cents per gallon.

The UNC Alumni Association often becomes the second (or third) home for the institution’s historical memorabilia and publications – perspectives into a past life, passed on through family before finding a way back to campus.

Earlier this month the alumni association received this postcard and letter. It isn’t the first postcard we’ve received, not even the first this month, but it came with an interesting story and we just had to learn more.

Enter alumni relations assistant and amateur alumni historian Lani Sorensen. “I received the postcard in the mail from a woman in Texas with no affiliation to UNC other than this card.

“She shared how her two uncles used to travel across the country during the 20’s through WWII, road tripping before it was even a thing. They slept in cots tied to the back of their old black car and ate along the way since roadside hotels and restaurants were almost non-existent.

“Along the way, they took photos and bought postcards to catalogue their journeys, and at some point they must have stopped in Greeley where they picked up this card. 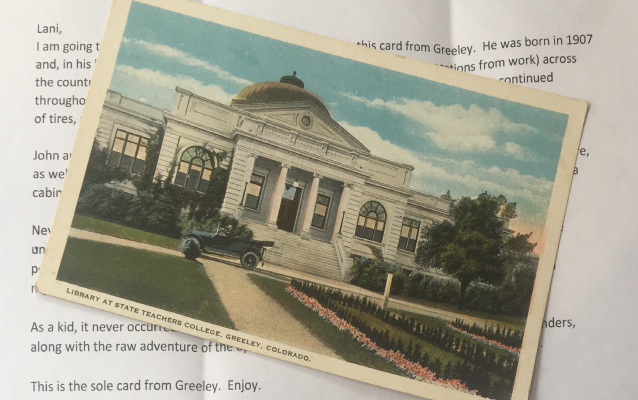 “I love this particular postcard. The library is so regal and beautiful that it made me want to know when the picture was taken; but with no date stamp or hand written note, all I had to go on was the campus landscape and the price of the post printed on the back – 1 cent.”

Thanks to Google and the alumni association’s set of Cache La Poudre yearbooks, Sorensen narrowed down her search.

“Given the dates of the uncles’ travels I knew approximately when to start. Google let me know that the 1 cent postcard was the postal rate beginning in 1928, it was raised to 2 cents in 1952.”

From there Sorensen hit the books – the yearbooks – Cache La Poudre.

“The library (now Carter Hall) was originally built in 1907, but early yearbook photos didn’t match the landscape shown on the postcard. The tell-tale mark is the white post in front of the library near the flowers. That post did not appear until 1928; right in the midst of the uncles' travels! I continued searching the yearbooks and found that the landscaping quickly became overgrown, so I was able to deduce that the picture was probably taken during the summer of 1928.”

Nearly 90 years later, the postcard found its way back to campus and the building still stands picturesque as Carter Hall - home to UNC’s administration. In that time, campus has changed greatly, but the spirit of nostalgia lives on in the mementoes and photos of the alumni association. They tell stories of dances, beanies, beloved buildings and social causes supported by students of the day.

It’s funny to think that one day, future campus historians will mull over archived Instagram posts, and chuckle at our hashtags and selfies. And while we can wonder about the future and remember fondly the past, we have an opportunity to enjoy the present. Construction of the new Campus Commons, expanded student enrollment, new programs, updated athletic facilities and more offer a dynamic and exciting campus landscape. There’s no better time to experience that first hand than during Homecoming. This October you can walk past the Campus Commons construction site, pass through your old classroom halls, cheer for your Bears during the Homecoming football game and even stop by the Judy Farr Center to look through the old yearbooks and many photos from our past.

Connect Back to Campus

Join the classes of 1967, 1992 and 2007 along with UNC Student Life, Greek Life and Athletics to celebrate your return to campus. The Alumni Association will be hosting reunions, campus tours, seminars and football tailgates throughout the weekend. Whether your last visit to campus was 50 years ago or five, Homecoming is your opportunity to remember your college days and learn about the new and exciting changes coming to campus and the City of Greeley. Learn more about alumni Homecoming activities.