“What Everybody Can Do Is Educate Themselves”

For Black History Month, Rico Wint '08 shares his perspective on his identity, his work with young Black men, and his ongoing involvement with his alma mater.

“What Everybody Can Do Is Educate Themselves” 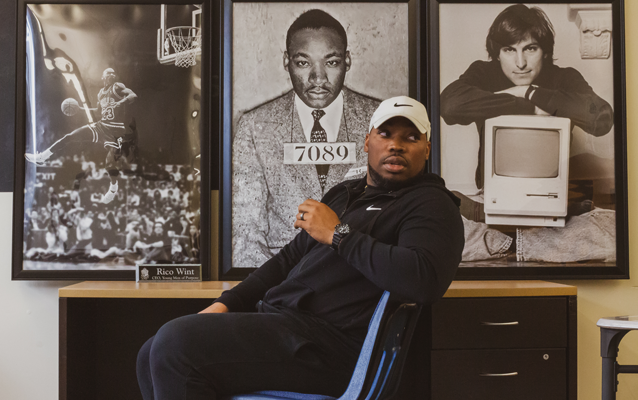 For Black History Month, UNC alumnus Rico Wint ’08 shares his perspective on his identity, his work with young Black men, and his ongoing involvement with his alma mater.

Twelve or so years ago, while working as an admission counselor at UNC, Rico Wint ’08 “accidentally” started an organization called Young Men of Purpose, or YMOP, simply to support kids who needed mentorship at his old high school in Aurora, Colo. Since then, the organization has grown and served more than 4,000 Black and brown families in the Denver metro area.

At UNC, Wint served as the student body president, and in 2020, he received the Honored Alumni Award for his outstanding contributions to his community and UNC. His current roles include teacher, pastor, husband, and father of three boys. Here, we catch up with him to talk about his identity, how he honors Black History Month, and why it’s important for alumni to stay connected to UNC.

Interview has been edited for clarity and concision.

On Wint’s identity as a Black man

“It's the first, foremost thing you know you are, every day. We can't forget it, because there are people who don't want you to forget it, for good reasons and bad reasons. It’s a big part of what I am and why I want to help and serve the way I choose to. Because I know what it's like being a young black kid from Denver, the inner city, and Aurora Central High School. That didn't work out for a lot of my friends. It just didn't. And whatever opportunities that I've been given, I just account them to God's grace and the people who opened the doors for me to get where I'm going.”

On why Wint serves Black and brown boys

“Malcolm [X] and Martin [Luther King, Jr.] and other leaders that I look up to, their whole thing was paying it back or forward or whatever you want to say. Pulling people along the way. it's important, especially for our communities where there are big disparities with education and opportunities. And when you're in a position where you have those, you have to go back and grab as many as you can and bring them, try to bring them as far as you can go, because they can go with you. So it's extremely important.” 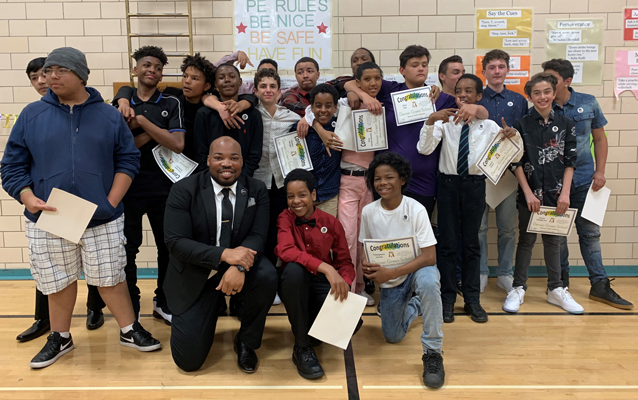 Above: Wint poses with some of the boys he's impacted through his work.

On excellence in YMOP and Black history

“Our motto is Manhood, Integrity and Purpose. And our whole idea is making sure that our boys understand that integrity is who you are most days and who you are when no one's looking. And your purpose is a forethought for why something exists. Right? So it like kind of combining all three of those worlds, because of guys like Dr. King, and because of guys like Malcolm, and Medgar Evers. And I could just list a million people.”

“What I've tried to do every day throughout Black History Month is share some type of fact or historical ideological point. I said this history of Africans, and I said in parentheses, ‘Yes, Black Americans are African.’ It didn't start as slavery. Period. That's the fact. That's not the beginning of our life's work, mission and culture, you know what I'm saying?”

“I tell my students, specifically my black ones, ‘Stop saying that you [your ancestors] were a slave; say you were enslaved. There's a difference. And it puts the onus on the right person, not you. As the onus on the enslaver, not the slave.’ Right? So it's just little things. It's just helping our people in general understand some of the nuances and how language is very important and very powerful in understanding, or coming to terms about things, like the language you use. This is kind of the stuff I try to put out in that very vast net of like, ‘Here, just chew on this intellectually, and just do with it what you will.’”

“What we [Black Americans] produce always comes out of need. That was like, ‘Well, we just have to do it this way.’ But I believe because the culture is so sweet, and I believe our people are so amazingly stout and astute, it becomes not only like, ‘Do we do it our way?’ It becomes culture. And it becomes something that's coveted and wanted. And I think you can't buy that; you can't teach that. Like hip hop music came out of the ghettos. You know what I'm saying? A bunch of poor Black and Puerto Rican kids. And now it's the number one musical art form in United States of America.”

On how people can honor Black History Month

“What everybody can do is educate themselves. Black, white, whatever. I learned a lot of the things I learned about my own culture via college and then post college, right? Or at home, my mom and dad teaching me things. And so it's educating yourself and it's learning, taking the time to realize that the historical elements and what Black people have achieved, and really Black Americans history is American history.”

“There's so much information. Many great men and women who have done great things, be it before America and then when we got here as well. And take the time to learn about it, then teach someone else about it. And we can grow through our education and informing ourselves about it.”

On why it matters to know Black history

“Because there's a Beyonce, you got to go back to who's Beyonce like? Because there's a Whitney Houston. But Whitney Houston was influenced by Aretha Franklin. Who was Aretha Franklin influenced by? She was influenced by a woman by the name of Mahalia Jackson, who was the first Black woman to win a Grammy, period, for gospel. But who was Mahalia Jackson influenced by? Now you're going back to the Chitlin' Circuit and vaudeville, and Black entertainers and artists who many of them, their music and things were stolen from them. You start going like, ‘So Beyonce can be Beyonce because Mahalia was Mahalia.’ You know what I'm saying? But if you don't know the history...”

On why it’s important for alumni, especially Black alumni, to stay involved at UNC

“I just see a lot of people in general, especially with the colleges, like, ‘Oh, I just got my degree, and I got out of there, cool, whatever.’ But I'm just like, I tell them all the time, I'm like, ‘Man, you need your degree, and you need your school to continue to do well after you're gone.’ Why? Because it's the name on top of your diploma. That's why. And it keeps validity to what you learn at some point. It's important to not only just root for your team; it's your home team, it's your school.”

“But specifically, for Black students, because it was such a small population on campus, it's important to make sure that other Black students can see the future of what it can be through you, by you coming back and speaking or you popping up at a homecoming and just networking.”

On why he stays connected to UNC while serving his students

“I tell my Black and brown boys all the time, ‘Guys, it's a place where a Black man like me went and could thrive, and I feel like if you wanted to go there, I feel like you could have the same experience. It's a great place. And a lot of people there supported me and helped me become a better leader, a better man, a better student. And I think the same thing could happen for you there as well.’ So that's why I give time. That's why I share my experiences.”

Wint’s work with YMOP was also featured in the 2016 UNC Magazine article "Success Looks Like Them."