By Rebecca Dell, Photography by Rob Trubia and Woody Myers

It’s easy to get involved at UNC when you’re still a student. But what about after you’ve walked the stage, the confetti has been swept up, and you’re settling into your first job? Or your fourth?

These six alumni in various fields tell us how they’ve donated their hard-earned wisdom to current students. Some have participated in Success Looks Like ME, a panel event where professionals advise students in the same career trajectory. Others serve as alumni career advisors, talking directly with students interested in a similar career. They have found a way to stay in touch with their alma mater — and pay it forward to students who wish to follow in their footsteps.

The UNC Connect portal allows you to register for the Alumni Association’s Bear Network and volunteer to help current students with resumes, mock interviews and career advice. 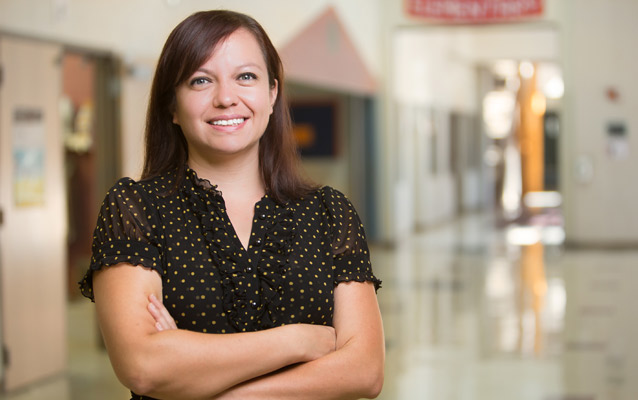 During Elena Mendoza’s time at UNC — a school she chose partly for its small size — she found an automatic sense of connection that extends to this day, as she and her friends road trip together and stand in each other’s weddings.

“It was more than just an education,” Mendoza says. UNC’s César Chávez Cultural Center offered her a “family away from my family,” and she still recognizes the importance of building a similar sense of community with her fellow Latinas and Latinos. To this day, she senses a connection whenever she meets a fellow UNC alum. “You share common networks, common people, or common interests or just some of those common memories.”

These days, as an assistant principal, Mendoza offers advice to those about to join the ranks of UNC alumni.

“This is your time to sell yourself,” she tells students in mock interviews. She wants quality candidates in the teacher pool, and she knows UNC produces quality teachers. “In my role, I get to go through lots of interviews every year, and I want to make sure that everyone is putting their best foot forward when they walk into those doors for those interviews.” 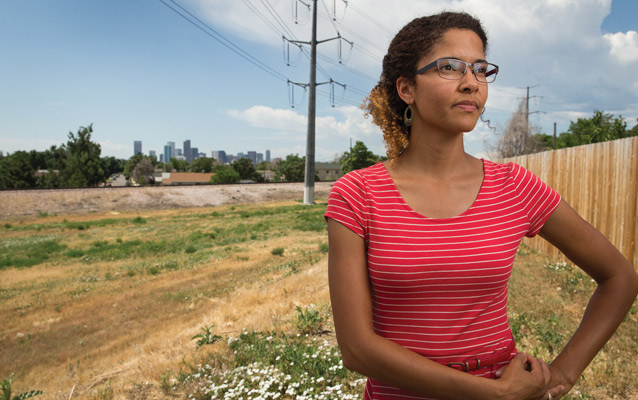 When she followed her parents and sister to UNC, she discovered a love for the social, political and economic aspects of both the environment and black America. Then, in a textbook, she discovered the phrase “environmental racism,” and as she puts it, her worlds merged.

Today, 11 years and one master’s degree later, she’s an urban planner at a nonprofit in Denver, where she helps give a voice to residents who are disproportionately impacted by pollution, soil contamination, and poorly designed or nonexistent public infrastructure. She got involved as a UNC Connect advisor when, she says, “I realized that there’s this fantastic career opportunity in the field of urban planning, but so many young people have no idea what it is. I mean, I didn’t know what it was.”

She encourages students to figure out how to relate to even general education classes — after all, that strategy helped her discover a career path she had never known existed. And she encourages her fellow alumni to step in and mentor the next generation of Bears.

“Here we are, as professionals in the fields we wanted to be in,
and I feel like we, in a way, owe it to help other students,” she says. 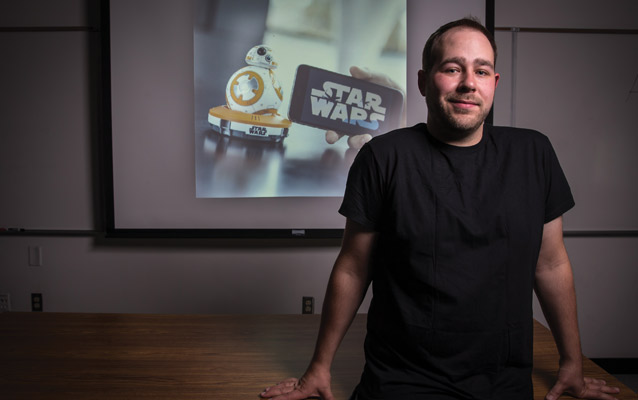 As a kid, Adam Wilson and his friends would hunt through the Dumpster behind an office surplus store near his hometown of Woodland Park. They’d take discarded computers home, disassemble them, and build them back together.

Most of those friends — including Wilson, one of the creators of the little round robot that Disney drafted as the toy version of Star Wars’ BB-8 droid — now have physics degrees. But Wilson almost skipped college altogether. After high school, he went into construction, determined to build his own home. Although he gained the necessary skills, he got sick of the back-breaking labor and headed to UNC, where as a student he helped design and teach UNC’s first robotics course with a fellow student who introduced him to his Sphero business partner.

He told his story on a Success Looks Like ME panel, encouraging students to consider more than just the traditional post-college route. “All through college, my only thoughts were I either need to get a Ph.D. so I can teach, or I have to find some job out there,” he says. Then he met Ian Bernstein, Sphero’s co-founder, and they started just making cool stuff. And then started selling cool stuff. With a great idea, hard work and some lucky timing, he says, students should keep an open mind about starting their own ventures. 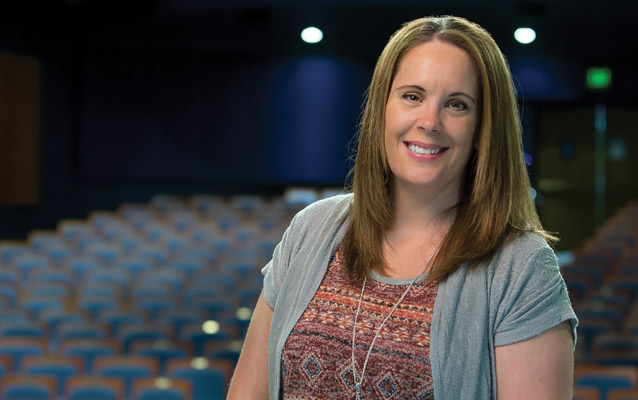 When Nicki Runge’s family moved from Belgium to Colorado, her parents thought she’d attend one of the top U.S. universities for the deaf. But Runge had fallen in love with Colorado, and she was determined to stay and attend UNC.

“I just felt a connection from the very beginning, like I would really fit in,”
she says. “And I really wanted to challenge myself to just immerse myself in the hearing world.”

She brought an interpreter to class, and she also brought significant theater experience from Europe. Her feeling had been correct: She fit right into UNC’s
acting program.

After graduation, she took several small acting roles, in addition to coaching volleyball and taking on other side jobs. Unfortunately, most companies wanted their actors to be able to voice the characters. Then Runge connected with Phamaly, a Denver-based theater company where all the performers have some sort of disability. After joining them for a musical, she set up the Rocky Mountain Deaf Theatre (RMDT) as a place where audience members don’t have to choose between watching action and taking in dialogue.

As an alumna, Runge encourages students to work through challenges to get
to their goals — just like she ultimately did. “Become strong and have patience,
and you’ll figure out how to break through those barriers,” she says.

Today, she’s morphing RMDT into ImaginASL, a company that focuses on the artistic collaboration between the deaf and hearing communities. Her baby daughter, Ember, is exemplary of the intersection between those communities — she’s hearing, but she’ll also be fluent in ASL. And maybe, just maybe, Ember will blossom into an actor just like her mother. “I have my fingers crossed!” Runge says. 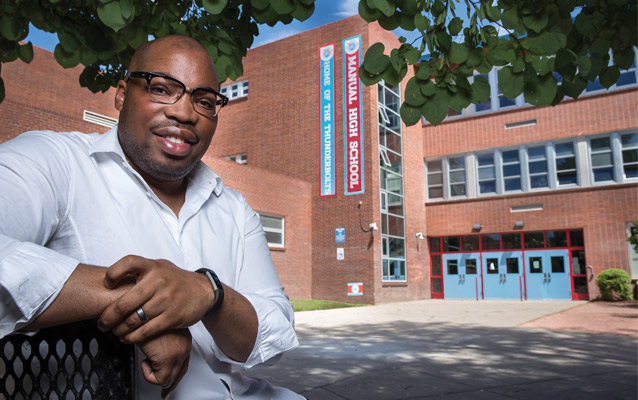 Right after graduation, former UNC student body president Rico Wint was working as a UNC admission counselor when he learned that a group of young men at Aurora Central High School needed some lunchtime mentorship.

He’d grown up in a hard-working, strict family: His mom was a teacher, and his dad, a Panamanian immigrant, worked for the U.S. Post Office. They spoke Spanish — a bit of an anomaly for a Black family in Denver, Wint says. He matured fast after his father’s death of colon cancer when Wint was a student at Aurora Central High School.

Wint says he picked UNC because it felt natural and unpretentious. He went on to help found a gospel choir, start an event to address race on campus, and serve in leadership roles across campus — culminating in his time as student body president. So after graduation, with those experiences in hand, he took the opportunity to talk with that group of kids at his old high school. Young Men of Purpose grew out of those lunchtime talks. The organization is driven by his religious convictions to offer hope and purpose to students who may not even realize they have options besides gangs or drugs after high school.

He offers mentorship at UNC, too, when he can get back to campus. “A lot of students of color don’t necessarily have those models of success where they’re from, and then maybe not even where they are on campus,” he says. His advice? Recognize that someone helped you get to where you are, and it only takes a small step of initiative for you to do that for someone else, too. 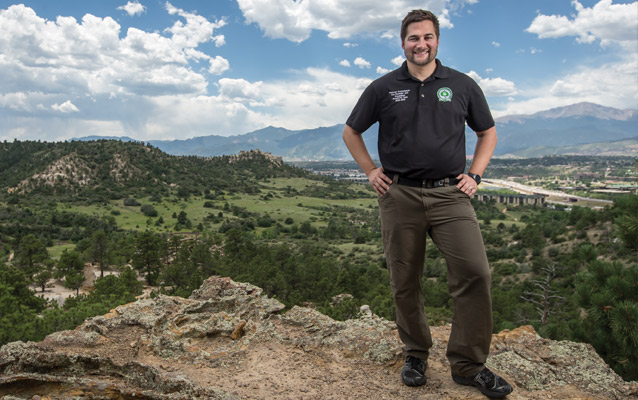 In grade school, Konrad Schlarbaum says, teachers wrote him off as a troubled kid. His parents had to teach him to read and write, and when he made it out of high school, they gave him the same advice they gave his older sister: join the military so you can finance your education.

His parents, never having navigated a four-year institution, were unable to advise Schlarbaum and his sister on their financial aid opportunities. So Schlarbaum headed off to Belgium, then Arizona, then Iraq, installing and maintaining communications equipment for the military. Along the way, he gave tours to reserve groups in Europe and set up satellite internet for his unit’s trailer base in Iraq — which helped him realize his entrepreneurial spirit needed an outlet outside of the U.S. Army.

Schlarbaum and his sister each came back home to Grand Junction, joined the reserves and enrolled in college classes at (then) Mesa State. He slogged through remedial courses, won a business award, worked full-time and connected the psychology department with the VA hospital to provide better care for veterans with Post-Traumatic Stress Disorder. When his sister transferred to study education at UNC, motivated by the way she’d seen her brother dismissed in the school system, Schlarbaum followed her. There, his culminating accomplishment was creating UNC’s Student LEAF (Student Leadership for Environmental Action Fund), which collects a student fee and funnels it into student, faculty and staff sustainability projects such as recycling stations around campus and an updated irrigation system. His most important work, he says, was creating two student paid positions, hiring a talented student team, and developing the founding policies and procedures. It’s his legacy at UNC, and now he encourages current students to explore their passions as early as possible when he speaks with them. He also advises them about college and preparing for the transition to the real world — advice he didn’t have as a first-generation college student.

“I’m early in my career so I don’t necessarily have a whole lot of money to contribute, but I definitely have my time and my knowledge to contribute,” he says.