UNC Board of Trustees Announce Finalist for Next UNC President 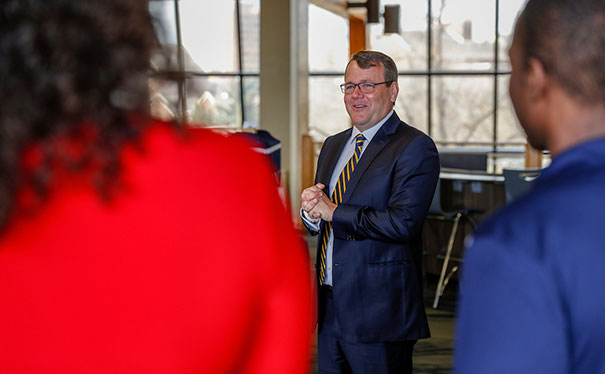 Above: Andy Feinstein meets with UNC students Monday, April 16, at the University Center after being named the finalist last week to succeed President Kay Norton.

The University of Northern Colorado Board of Trustees announced today that Andrew “Andy” Feinstein, Ph.D., is the finalist to become the next president of the 129-year-old, doctoral research university.

Feinstein is the provost and senior vice president for Academic Affairs at San José State University, one of the largest public research universities in the West. As SJSU’s chief academic officer since 2014, Feinstein oversees 154 degree programs and supports more than 35,000 students, 1,900 faculty and 550 staff and administrators in seven academic colleges.

The campus and community will have opportunities Monday and Tuesday, April 16-17, to meet Andy Feinstein, Ph.D., the finalist to become UNC’s next president.

Dates and times are as follows (location is the University Center):

A 15-member search committee comprising UNC trustees and student, faculty and staff representatives unanimously selected Feinstein as the finalist following a search that began last fall when current president Kay Norton announced that she would retire at the end of the academic year.

In an email sent to campus today, the search committee called Feinstein, “A proven academic leader who values collaboration and transparency.” He “has shown his ability to lead and learn at three major universities. He is thoughtful, engaging, passionate about students, and eager to be part of our UNC and Greeley communities.”

Upon Norton’s announcement in September, trustees established the search committee, which screened and selected applicants to interview, conducted interviews and selected Feinstein. Campus feedback also helped inform the selection, with an online survey and a dozen listening sessions in January that collected feedback on leadership attributes that were incorporated into the position description.

"There was lots of interest from candidates, and Andy Feinstein clearly rose to the top,” said Board Chairman Dick Monfort. “We had a diverse search committee of faculty, staff, students and trustees who understand the issues at UNC and had a lot of positive interchange.

“Andy was the candidate who resonated with everybody on the committee. He understands faculty, staff and student issues, he understands the business issues, and he understands that those things don’t always go hand in hand. He’s open to change, and he knows how to do it collaboratively. He’s going to be great, and we’re all looking forward to working with him."

Faculty Senate Chair Francie Murry, who was on the search committee, noted Feinstein’s ability to “be decisive about difficult decisions to be made” while also creating “a positive tenor on campus.”

“Andy is a people person; he understands the importance of relationships,” said UNC Professional Administrative Staff Council Chair Shawanna Kimbrough-Hayward, who was on the search committee. “My hope is that everyone will get behind the new president and help build a community on campus.”

Student Senate President Kevion Ellis, also on the search committee, said Feinstein will lead change by helping campus work together. “This is a leader I would love to follow.”

Feinstein, who has 29 years of higher education experience, previously served as dean of the Collins College of Hospitality Management and the James A. Collins Distinguished Chair and professor at California State Polytechnic University, Pomona. While dean, Feinstein also served as the chancellor-appointed director of Hospitality Management Education for the entire California State University system. Feinstein joined the University of Nevada, Las Vegas in 1999 as an assistant professor, was promoted to full professor and served as chair of the Department of Food and Beverage Management and associate dean for Strategic Initiatives at the Harrah Hotel College and senior adviser to the President.

Feinstein earned bachelor’s and master’s degrees in Hotel Administration from UNLV and a Ph.D. from Pennsylvania State University. He has been married to his wife, Kerry, for 22 years and they have two children, Nicholas and Rachel.

“I am humbled, honored, and very excited by the opportunity to serve as the next president,” Feinstein said in the campus email. “During the search process, my wife and I fell in love with the university community and the city of Greeley. I look forward to building on the outstanding reputation of UNC and to leading the campus through the completion of a comprehensive campaign that will provide resources for future generations of UNC Bears.

"Especially meaningful for me is that I will continue serving a public institution of higher education that recognizes and supports the potential of each student, including many who are first in their families to attend college. I would like to express my gratitude to everyone I have met thus far, and I look forward to engaging with all of you very soon."

Opportunities for the campus and community to meet with Feinstein will be Monday and Tuesday, April 16-17. The schedule is being finalized. Details will be announced on the Presidential Search website and in Thursday’s edition of UNC Today. State law requires UNC to wait 14 days between announcing a finalist and hiring a new president, so Feinstein cannot formally be appointed until April 24.

During his tenure at SJSU, Feinstein has collaboratively led and supported efforts aimed at tracking and enabling student success and provided $26 million to improve graduation and retention rates. He also heads a multi-dimensional international and continuing education enterprise that generates $34 million in annual revenue, oversees the Dr. Martin Luther King, Jr. Library — the nation’s first library established through a university-city partnership — and provides oversight for graduate education and research activity at the Moss Landing Marine Laboratories. Additionally, he manages a $220 million divisional budget and heads the SJSU Research Foundation, a research auxiliary with a $230 million active research grant portfolio generating $50 million in research-related expenditures annually.

As a scholar, Feinstein has published more than 30 refereed journal articles, numerous books and book chapters, and presented at dozens of meetings and conferences on such topics as student success, strategic management, simulation modeling and foodservice operations. While dedicated to his own scholarly pursuits, he is also engaged in ways to enhance student success and was a recent recipient of a $3 million grant from the U.S. Department of Education supporting the development and assessment of STEM-focused active learning strategies.

Prior to joining SJSU in July of 2013, Feinstein was Dean of the Collins College of Hospitality Management and the James A. Collins Distinguished Chair and Professor at California State Polytechnic University, Pomona. While dean, Feinstein also served as the chancellor-appointed Director of Hospitality Management Education for the entire California State University system. Feinstein joined the University of Nevada, Las Vegas in 1999 as an assistant professor, was promoted to full professor and served as chair of the Department of Food and Beverage Management and associate dean for Strategic Initiatives at the Harrah Hotel College and senior adviser to the President.

The search process began last September when UNC President Kay Norton announced at her annual State of the University address that she would retire at the end of the current academic year. Trustees formed a 15-member presidential search committee that, in addition to the board, included representatives from student, faculty and staff governance groups. They also gathered campus feedback on characteristics sought in the next president through a university-wide survey and in sessions hosted by presidential search consultant Alberto Pimentel. The feedback helped inform the job description. The search committee assisted in screening and selecting applicants to interview, conducting interviews and selecting the finalist.

About the University of Northern Colorado