The University of Northern Colorado’s Audiology and Speech-Language Sciences (ASLS) program has been awarded a total of $60,000 since initiating the Greeley Treasure Chest Program in 2017. The program utilizes boxes filled with age-appropriate books and toys to improve children’s communication and language skills.

In February, the program received $50,000, on top of $5,000 given in both 2017 and 2018, from the Scottish Rite Foundation of Colorado. The funding goal is to increase the program’s reach in the community, number of weekly sessions and treasure chest bins. From fall 2017 to fall 2018, the program reached 36 families and 47 children and compiled around 70 Treasure Chests.

Deeply ingrained in the Greeley community, the program partners with United Way of Weld County and the SEVA Community, where the treasure chests stay and coaching takes place. UNC’s Speech-Language Pathology program sends graduate students to guide parents on how to use the materials in the chests to improve their child’s emergent literacy and language skills. 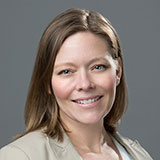 “I’m really proud of this work because anytime we can impact the community while supporting our students, it’s great. Our students have said positive things about it and feel it’s helped them learn new skills and become more confident in their ability to work with families,” said Kim Murza, Ph.D., an associate professor and graduate coordinator who also heads the Treasure Chest Program (image at right). “It’s been a great way to align what we do with community partners; it’s been a lot of work but well worth it.”

Based on the child’s age, Treasure Chests are specifically created for infant-, toddler- and preschool-age children. Each box contains books and no-battery toys, such as Legos and puppets, to focus on the parent-child interaction. After a graduate student meets with parents to help prepare them, parents take the chests home for two weeks to increase time spent together. 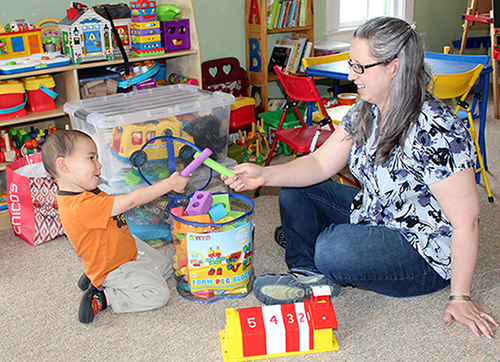 Amy Huang, who has been a participant in the program for two years, plays with her son, two-and-a-half-year-old Isaiah. 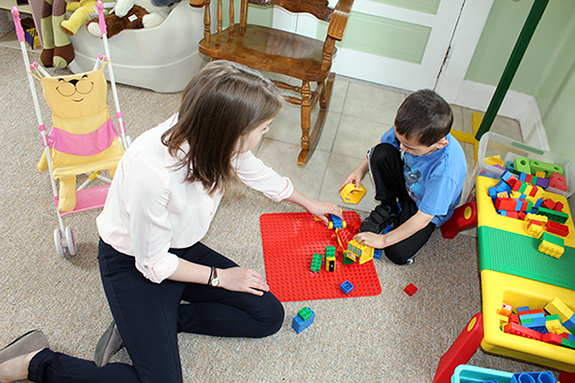 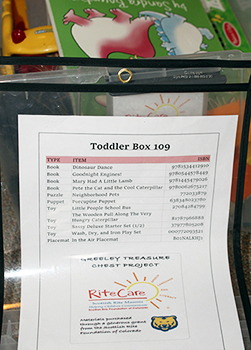 An example of the types of toys and books in the Toddler Box at the SEVA Community house. This one includes four books, four toys, a puzzle, puppet and placemat. 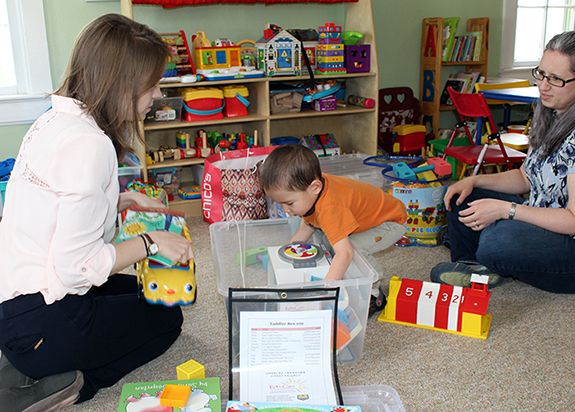 Two-and-a-half-year-old Isaiah reaches into the Toddler Box with Breckinridge and Huang observing.

“We love Treasure Chests because it encourages you to be a good parent. It helps me come alongside and spend time reading and playing with them,” said Amy Huang, who has been a participant in the program for two years with her children, five-year-old Samuel, and two-and-a-half-year-old Isaiah. “Isaiah speaks a lot more since he started the program, his vocabulary has grown and he’s starting to read now, so that’s exciting.”

Hannah Breckinridge, a Speech-Language Pathology graduate student, runs the program with three other graduate students. They meet families from 9-11 a.m. every Wednesday in 30-minute sessions and learn early intervention therapy techniques in a community setting.

“This program is honestly amazing. We’ll get some children who we think are a little delayed at first, but after showing the parents strategies once a week, they’ll come back at the end of the semester and the children are talking and pointing and saying full sentences! Before, they weren’t even saying single words,” said Breckinridge. “It’s incredible how quickly children can pick up language and how much 30 minutes a week can make an impact.”

The program is now focused on bringing in more diverse, marginalized families and those who may need more support, such as immigrant or refugee families.