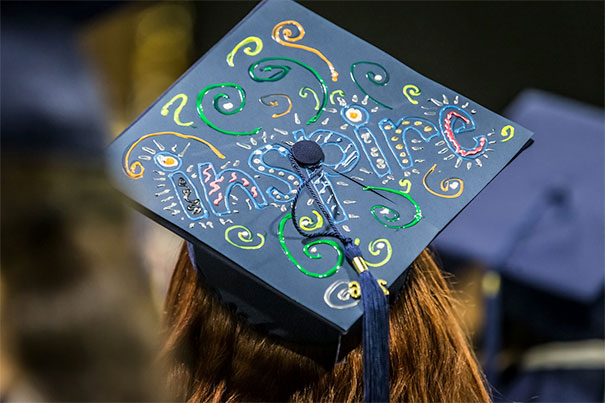 The University of Northern Colorado hosted fall commencement ceremonies Friday, Dec. 7, and Saturday, Dec. 8, in the Bank of Colorado Arena in Butler-Hancock Athletic Center, south of the intersection of 14th Avenue and 20th Street.

The Graduate School ceremony started at 7 p.m. Friday, Dec. 7, with doors opening at 6 p.m., and about 300 candidates received their master's, doctoral and specialist degrees.

Watch the video of the 2018 Fall Graduate Ceremony on Dec. 7:

The Graduate School ceremony keynote speaker was Cary Smith, who is in his first year as principal of Greeley Central High School but also begins his nineteenth year at the Castle. He and his wife with their two children have lived in Greeley for the past 26 years both working for District 6 the entire time. Overall, Smith begins his thirty-first year in education. He has taught in a prison, in the People's Republic of China — he might be the only person to ever hit a golf ball off the Great Wall of China — and in California prior to moving to Colorado.

The student speaker was Marianna Lucero, who is the daughter of a Mexican immigrant and a first-generation college student. She is holds a BFA in Theatre, Film and Television and a Graduate Teacher Education Master's Degree in Urban Community Teaching from the University of Colorado Denver. She graduated from UNC with her Masters of Arts in Theatre Education.

About 600 undergraduates received their degrees during two ceremonies on Saturday, Dec. 8, with doors opening one-hour prior:

All ceremonies were broadcasted live online. Go to unco.edu/commencement/webcast.asp for instructions about the live video feed.

Additional information, including more details about the speakers and ceremony etiquette and protocols. 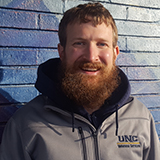 Danny Medoff founded two UNC student clubs after transferring from Seattle in summer 2016 and serving his country for eight years.

Last fall, he started the Philosophical Kevlar club for military veterans with the help of UNC Professor and Chair of Philosophy, Nancy Matchett, Veterans Services Director, Dan Turnbeaugh, and recent alumnus Justin Howell, who worked on the Veterans Services Event Planning team. He was inspired after learning about the topic among veterans of “moral injury,” which refers to the internal suffering resulting from acting against moral codes.

Read more on his story 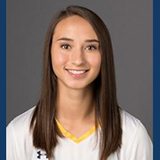 UNC Coach Tim Barrera describes Mariel Gutierrez as one of the most decorated players in the history of Big Sky Soccer. The four-year starter for the UNC Bears soccer team is the only player to make All-Region all four years and one of four players to make first team All-Big Sky all four years. She was named to the Big Sky all-tournament team three out of four years while leading the Bears to three conference championship games.

On December 11, she was named to the first-team Scholar Athlete All America by the United Soccer Coaches Association. Gutierrez never missed a game due to injury and set the all-time Big Sky record for games played at 85.

Read more on her story