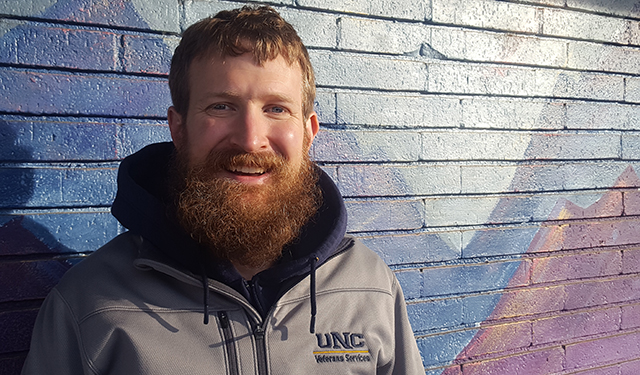 Danny Medoff founded two UNC student clubs after transferring from Seattle in summer 2016 and serving his country for eight years.

Last fall, he started the Philosophical Kevlar club for military veterans with the help of UNC Professor and Chair of Philosophy, Nancy Matchett, Veterans Services Director, Dan Turnbeaugh, and recent alumnus Justin Howell, who worked on the Veterans Services Event Planning team. He was inspired after learning about the topic among veterans of “moral injury,” which refers to the internal suffering resulting from acting against moral codes.

Top image: Danny Medoff poses for a photo outside of The Blue Mug coffee shop (photo by Katie Corder). 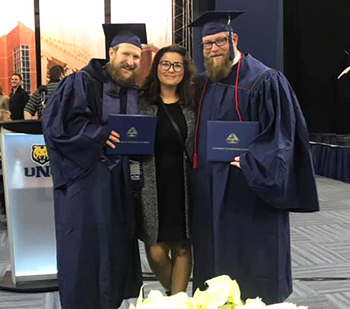 Above: Medoff, left, at the fall 2018 commencement ceremony.

“The club allows veterans to talk about whatever in a nonjudgmental and loose and free way,” said Medoff , who also helped start UNC’s Philosophy Club a year earlier, along with fellow students Tessa Holcomb, Nathan Evans, Vanessa Salazar, Kamri Flores and Cory Williams. “Everyone’s able to bring their own perspective, and it helped us in seeing the importance of our own individual perspective.”

Medoff grew up in Columbia, Maryland. He joined the Army in 2005 as a medic, and his military career included two tours in Iraq and Afghanistan. While in Baghdad, he worked in a hospital treating injured soldiers and civilians and experienced rocket attacks. After his tour ended, he re-enlisted and was stationed in Germany from 2008 to 2011 and then in Fort Lewis, Washington, where he stayed until he was discharged in 2013. 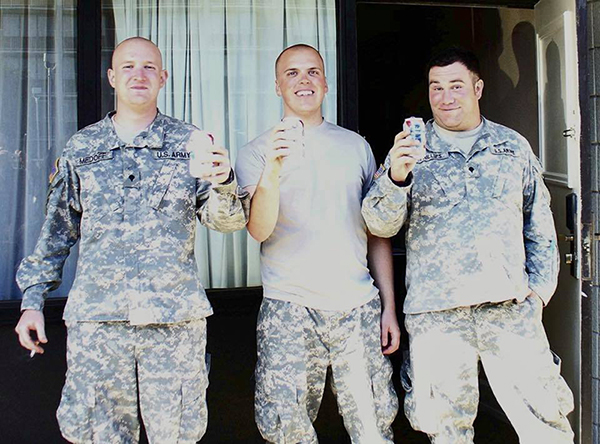 Above: Medoff, left, poses for a photo with fellow military personnel.

He decided to take advantage of the GI Bill and attended a Seattle-area community college in 2015. Originally, he studied nursing before switching to physician assistant coursework; however, he still didn’t feel as if it was meant for him. He decided to attend UNC in 2016 after learning it was a smaller university with a calm atmosphere.

“I wanted to go somewhere similar to the landscape and culture of Washington,” Medoff said. “I wanted to go to a four-year school, but not one of the huge ones, so I found UNC.”

After taking a philosophy course at UNC, he realized that he was in the right place. After diving further into philosophy, he learned more about self-care in terms of communicating and listening better as well as becoming more resilient and motivated.

“It helped me realize that I always tended to question, be skeptical, about the world and myself, but I always felt uncomfortable about asking questions,” he said. “Philosophy showed me how I do have the courage to ask challenging questions, confront challenging issues in more productive ways and not feel stuck in a singular mind-set.”

Medoff made this video while he was interning at the UNC Department of Philosophy on why philosophy is important.

At UNC, he served on Student Senate during the 2017-18 academic year and worked on the UNC Veterans Services’ Media Team. He also presented his paper, “Mass Shootings and the Concept of Evil,” which explores how to better discuss gun violence in the U.S., at an undergraduate section of the Minnesota Philosophical Society last October. 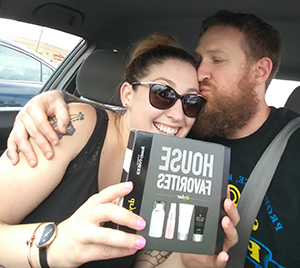 After graduating, Medoff moved to Albany, New York, to be closer to his girlfriend and wants to keep all future options open and on the table. (Image at right: Medoff with his girlfriend)

His advice to future and current students is: “Allow yourself to accept how you’re feeling, and that no matter how bad you’re feeling, remember how you got to that moment and that you’re never stuck,” he said. “There’s always a way out.”