UNC Coach Tim Barrera describes Mariel Gutierrez as one of the most decorated players in the history of Big Sky Soccer. The four-year starter for the UNC Bears soccer team is the only player to make All-Region all four years and one of four players to make first team All-Big Sky all four years. She was named to the Big Sky all-tournament team three out of four years while leading the Bears to three conference championship games.

On December 11, she was named to the first-team Scholar Athlete All America by the United Soccer Coaches Association. Gutierrez never missed a game due to injury and set the all-time Big Sky record for games played at 85.

“Being a student-athlete has been great; it gives you a lot of opportunity to gain a lot of things that I wouldn’t have otherwise,” said the two-year team captain. “You learn about discipline, time management and work ethic.” 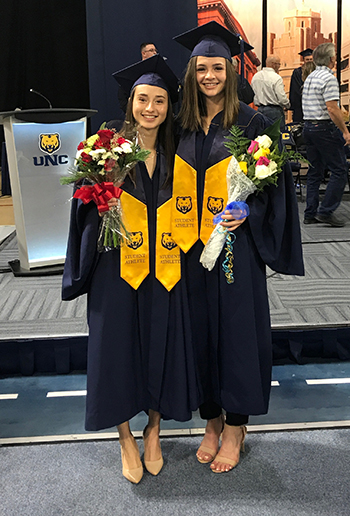 Originally from Gypsum, Colorado, she was the first person in her family to go to college. Her parents are originally from Mexico and own a successful trucking company. Along with soccer, she also played basketball at Eagle Valley High School as a point guard, “so despite her small size at five-foot, four-inches and 120 pounds, she’s a really good athlete,” said Barrera.

She graduated from the Monfort College of Business in seven semesters with a bachelor’s degree in Finance. She was an Academic All-American her junior year and is likely to be named again this year when the honor is awarded. Barrera describes her as a “really humble, great, hardworking kid.”

(Image at right: Gutierrez posing for a photo with fellow teammate Erica Estes at fall 2018 commencement. Image provided by Barrera).

Gutierrez plans to pursue a professional soccer career and submitted her registration form for the National Women’s Soccer League Draft that will be held Jan. 10 in Chicago.