Biking for a Better Future: One Bear's Ride for the UNCCRI

Biking for a Better Future: One Bear's Ride for the UNCCRI 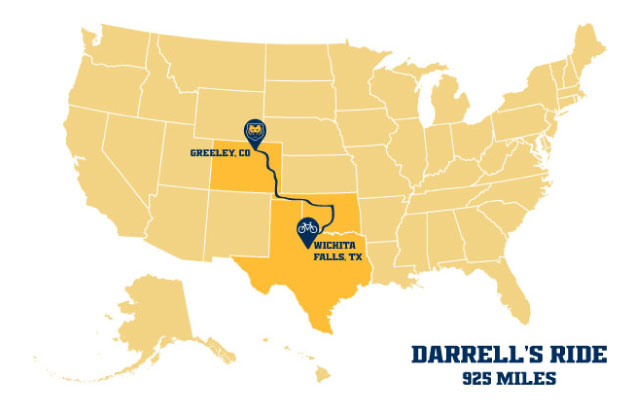 UPDATE: Due to an unfortunate accident Darrell's Ride has been canceled. All gifts that have already been made will be directed to the University of Northern Colorado Cancer Rehabilitation Institute. If you would like to support the mission of UNCCRI, donations are still being accepted at unco.everydayhero.com/us/darrells-ride.

For years Dr. Frank Wyatt ’96 has been itching for an adventure.

As an active cyclist and Professor of Exercise Physiology at Midwestern State University, he had toyed with the idea of doing a 1,500-mile bike ride from the southern tip of Texas to Greeley, Colo. to raise money for the University of Northern Colorado Cancer Rehabilitation Institute. But life always seemed to get in the way.

At least until last fall.

“Something very personal to me happened in October of 2018,” Wyatt says. “I went back to Stillwater, Oklahoma for my 45th High School Reunion and one of my best buddies, Darrell Seward, was not there. We had stayed in contact with each other since we graduated high school. We were pretty tight.” 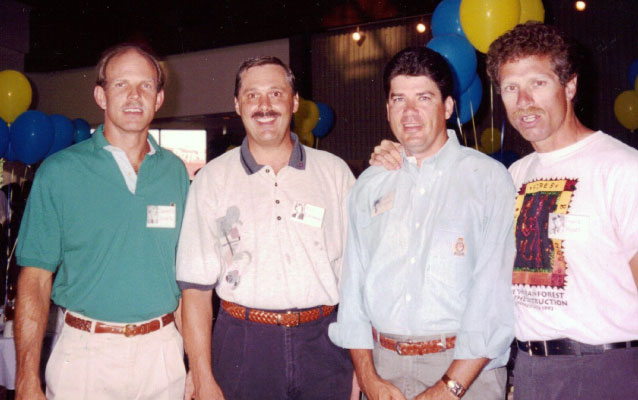 Wyatt later learned that Seward’s absence was due to an ongoing battle with Pancreatic Cancer. He passed away just after Thanksgiving 2018 at the age of 63.

That’s when Darrell’s Ride started to take shape. A 925-mile bike ride from Wichita Falls, Texas to Greeley, Colo. dedicated to Darrell’s memory and an organization that holds a special place in Wyatt’s heart.

“Darrell is my motivation to do this, but I’m not just doing this for him, I’m doing this for the people who utilize the services at the University of Northern Colorado Cancer Rehabilitation Institute,” Wyatt says.

While Wyatt was working to earn his Doctorate in Sports and Exercise Science at UNC in the early 90’s he collaborated closely with Dr. Carole Schneider, founder of the UNCCRI. The Institute was established shortly after Wyatt’s graduation, and he has long admired the daily work they do to help improve the lives of cancer patients through exercise.

“What we’re learning about exercise not only as a preventative tool of many cancers, but also of other pathological and disease processes is incredible. We are to the point now that we are looking at exercise as a medical modality. We are coining terms such as exercise is medicine and exercise medicine,” Wyatt says.

Which is exactly what researchers at the UNCCRI are exploring. Wyatt hopes his ride will raise awareness and support for the important work taking place at the UNCCRI.

“You know, if I were a big CEO, I’d be giving a lot of money to the UNCCRI, but I’m not so instead I’m doing what I can,” Wyatt says. “By mid-July my ride will be forgotten by a lot of people, and I understand that, but for this moment I can do something. So, I hope anyone who sees this will take that to heart and do their own thing. Whether it’s contributing financially to my effort and the UNCCRI or starting a project of their own, I hope others see this and get involved and do something in the moment that can really make a difference,” Wyatt says.

Wyatt will leave Wichita Falls on Wednesday, June 19 and hopes to be at the UNCCRI in Greeley by July 1. His goal is to raise at least $1,500 for the UNCCRI and you can help! To make a gift in support of Wyatt’s efforts visit unco.everydayhero.com/us/darrells-ride.