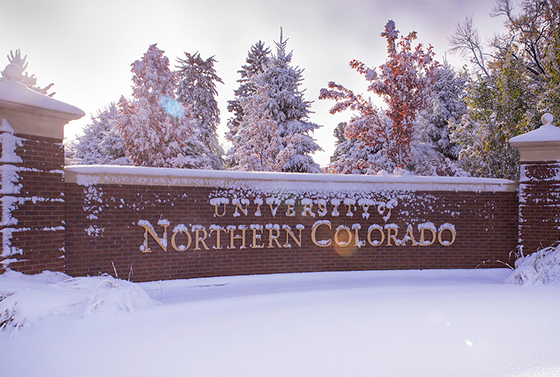 The University of Northern Colorado’s Finance and Audit Committee and Board of Trustees met last week to discuss several topics and updates.

UNC President Andy Feinstein provided a high-level overview of the university’s FY23 budget, including an update on state funding. According to his report, UNC is in its strongest financial position in over a decade, despite anticipating a decrease of approximately $4.3 million in revenue next fiscal year compared to FY22, due in part to an estimated 10% decline in undergraduate enrollment.

Back in November, the governor's office proposed an increase of $42.6 million in state funding for higher education with a 0% tuition increase. According to Feinstein, that modest 4.6% increase from last year isn't enough to cover core minimum costs from inflation, salaries and insurance. He, along with the chief executive officers from three other research institutions, met with the Joint Budget Committee (JBC) in early January to present alternative models that would more adequately fund higher education. Colorado currently ranks 47th in the country for spending on higher education.

While more than one alternative was presented to the JBC, Feinstein’s overview included the assumption of an additional 6% increase in state funding and a 3% increase in tuition. Nothing will be decided until after the state finalizes higher education funding, expected sometime in May.

Other FY23 budget planning included the continued management of expenses to ensure spending aligns with the university’s priority to increase student success, and what Feinstein referred to as a critical investment in faculty and staff with a planned 2-3% compensation increase in July. Budget planning will continue through April.

UNC’s enrollment was lower than anticipated this year with final undergraduate enrollment at 6,213, 218 full-time equivalent (FTE) students below budget, and graduate enrollment at 1,637, or 45 FTE below budget. Despite the enrollment-related shortfall in revenue, with the benefit of a combination of unbudgeted proceeds from oil and gas lease royalties, forecasted to be $4.8 million this year, and $10.9 million from the supplemental federal relief package, referred to as Higher Education Emergency Relief Fund (HEERF III), the university is projecting $20.3 million operating surplus for FY22. That’s compared to the budget surplus of $2.9 million. Additionally, the university’s cash position is projected to be at $73.7 million at fiscal year-end, $17.3 million more than the FY21 ending cash position of $56.5 million.

Forecasted personnel expenditures have been reduced by $5.6 million following Q2, reflecting the general challenges experienced in the labor market nation-wide, as the university has seen increased turnover and difficulty filling vacant positions. UNC has implemented several strategies to improve employee recruitment and retention, including a $1,500 increase to the base salary for full-time employees and a prorated increase for part-time employees, minimum wages increased to $15/hour for staff and $14/hour for students and adjunct faculty and graduate teaching assistants received a one-time payment of $250. Non-personnel expenses, which have been reduced by $1 million following Q2, continue to reflect conservative spending, even with a full return to on-campus instruction and activities. Other contributing factors that have been beneficial in minimizing spending, such as slower deliveries related to supply chain issues and reduced travel, have been mitigated by increases in inflation which have affected significant increases in utilities and some categories of supplies and purchased services.

Overall, the positive results following Q2 allow the university to reinforce its commitment to strengthening the institution’s financial health with the same agility and responsiveness demonstrated consistently over the last four years, despite pandemic pressures.

Board of Trustees Meeting

The Board of Trustees met on Friday, Feb. 11 discussing updates to the university’s progress in exploring an osteopathic medical college, UNC’s Students First Framework and other curriculum updates.

Senate Bill 56, which would allow UNC to offer specialized degree programs in osteopathic medicine, was introduced in the State Senate on Jan. 18. It was passed unanimously by the Senate Education committee on Feb. 9 and will make its rounds in the full Senate and House in the coming weeks. Feinstein informed board members that he is optimistic about the positive progress so far, reporting that the university has raised $6 million in cash to date, the application for accreditation with the Commission on Osteopathic College Accreditation (COCA) has been submitted and a national search for the founding dean has already begun.

Vollendorf also discussed strategies to strengthen and diversify the university’s academic portfolio, identifying areas of persistent enrollment decline and creating new programs in response to workforce needs and student demand. To that end, she provided a summary of the changes to existing degrees and recommended the board take action to approve a new academic degree program and update several others, all of which passed. Beginning academic year 2022-23, UNC will offer the following:

In other news, the board:

View the Board of Trustees Feb. 11 meeting documents.