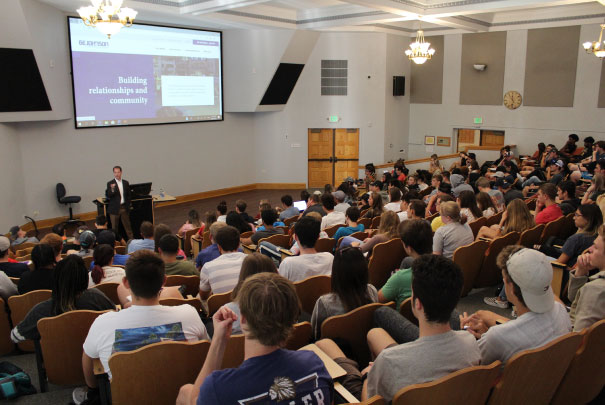 There’s a new energy in Kepner Hall this fall – an energy faculty and staff in the Kenneth W. Monfort College of Business attribute to an influx of freshmen in the building.

That’s because for the first time in many years, the Monfort College of Business is offering a first-year seminar in an effort to boost student success.

“We want to get those students into the building, and we want them to know that this is their home. This is Kepner Hall. This is where the business school is. You can come over here. Use our computer labs. Talk to the faculty. Join the student clubs,” Dean Paul Bobrowski says.

The Dean's Leadership Council had long discussed the idea of creating a first-year seminar with Bobrowski and former Dean of the business school Dr. Don Gudmundson, and with campus wide discussions taking place about strategies to improve student success, this fall seemed to be the perfect opportunity to finally launch that course.

Students hit the ground running with a strength finder assessment to learn more about themselves and their areas of greatest interest. Since the start of the semester they’ve also been teamed up and introduced to some of the most important basics of business.

That’s why a series of distinguished alumni like Greg Anton ’87 and Peter Speiser ’91 were also recruited to speak to and inspire the class.

“Dream big – everything is possible,” Anton told the class during a visit on October 2. “Write down your dreams or type them on your computer. Then, most importantly, share your dreams with others. They’ll hold you accountable. You’ll hold yourself accountable.”

Both Anton and Speiser serve as members of the Dean’s Leadership Council and are optimistic about the long-term impact of this class. They hope this early exposure to the variety of people and opportunities in the business world will help their fellow Bears find success at UNC and beyond.

“One of the things that I like talking to the kids about is really the whole idea that our paths take all kinds of different winding roads,” Speiser says. “My path was more along the lines of just blindly bumping into stuff and saying, ‘nope not that, nope not that, nope not that.’ Having some ability to actually talk to people who have had a career path that has been pretty straight-line, or maybe more diverse would’ve been so helpful to me as a student.”

“I think the best thing about the class itself is that they’re getting exposure to people who are UNC alumni, who have been in their exact same position and navigated their business life to achieve some level of success. I think having some level of exposure to that is really valuable for them,” Anton says.

Prior to this course, most business students didn’t have much reason to step foot in the building, let alone interact with successful business alumni, until at least their second year.

Now equipped with context, experience and valuable contacts, college leaders hope this course will help students persist and reach that ultimate goal of graduation on time, or even early.

“What we wanted to do was to try and give the students more information earlier in their education, so they don’t have to make as many changes later on. That way they’ll be able to get through their program quicker and more smoothly rather than being a second semester junior who gets into some of the upper level courses and realizes that’s not what they want to do,” Gudmundson says.

“Ultimately that’s why they’re here. The reality is nearly half of these students may not graduate. But they could be the class that turns that around and support one another in graduating together,” Anton says.