Faculty and staff in University Libraries routinely search the online auction site eBay for rare university finds to add to the archives of historical UNC artifacts.

Jay Trask, head of Archives and Special Collections, who shared the university’s collection of artifacts found on eBay for the slideshow below, said they look for the “unique and unusual items that we can’t get anywhere else.”

Gregory Heald, associate dean of UNC Libraries, started the search on eBay in 2017, and they didn’t come up short handed. The goal of collecting these and other items is to tell the story of UNC and to tell it as broadly as possible.

"Archives had not comprehensibly collected books and other papers until the department was founded in the 1970s, so I knew there was a gap; within that gap, a lot of faculty here had produced, not just text, but also learning objects, so I started going through eBay and other sites to search for such items," said Heald. "Over the past couple of years, I've made it a monthly habit to search for unique items that would enrich the collection that tells the story of UNC."

View the UNC artifacts discovered and purchased on eBay: 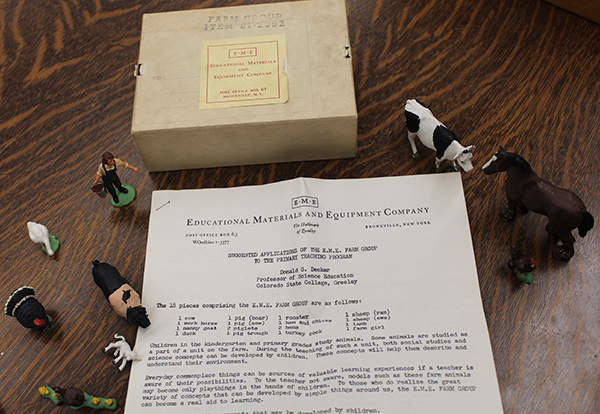 This educational kit was developed in the late 1950s by Professor of Science Education Donald G. Decker. Decker, who received his master’s degree in Science Education here in 1937, also served as a college dean and provost while producing numerous science-education textbooks.

This kit served as an example of how to provide valuable learning experiences about agricultural animals to children in kindergarten and primary grades.

“Everyday commonplace things can be sources of valuable learning experiences if a teacher is aware of their possibilities,” the document states. “To the teacher not aware, models such as these farm animals may become only playthings in the hands of children. To those who do realize the great variety of concepts that can be developed by simple things around us, the E.M.E. FARM GROUP can become a real aid to learning.” 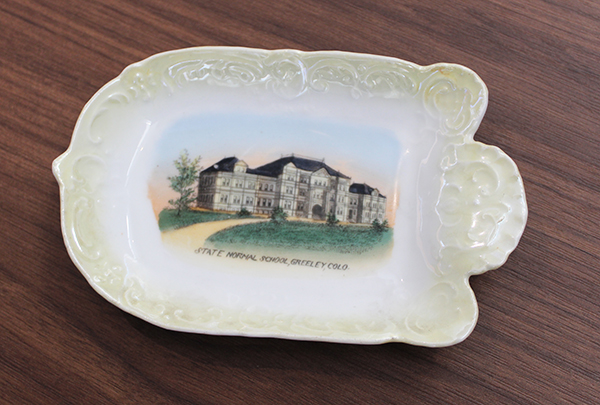 This small dish souvenir, over 100 years old, has an image of the first campus building, Cranford Hall, which was built in 1890. It’s currently on display in the Husman Family UNC History Wall on the second floor of the Campus Commons. 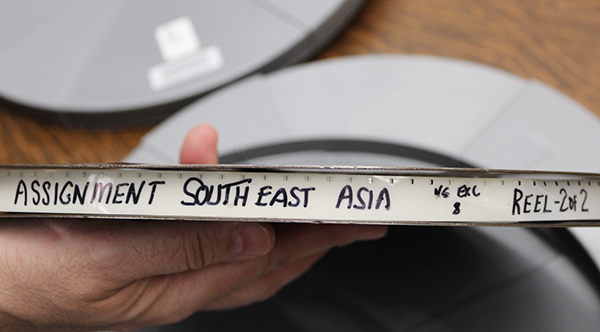 This is a side view of the second film reel of James Michener’s 90-minute television show, “Assignment—Southeast Asia,” that was produced in the late 1950s and was colorized. Michener started to teach in 1936 and simultaneously earned his master’s degree in 1937 from what is now UNC. His donated his papers make up UNC’s James A. Michener collection. 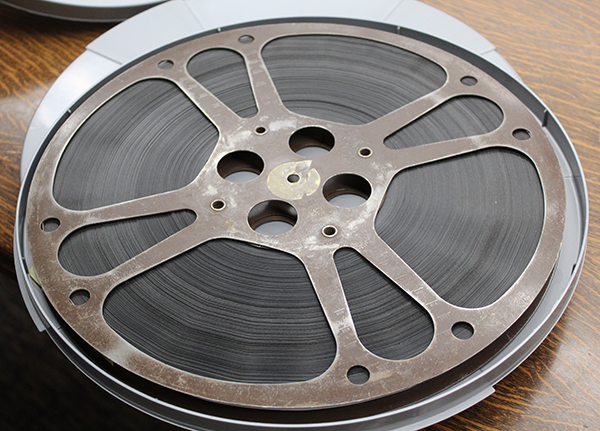 Another view of the second film reel of James Michener’s 90-minute television show, "Assignment—Southeast Asia." Greg Heald, associate dean of UNC Libraries, periodically searches eBay for Michener-related materials, and he discovered this reel during one of his searches. 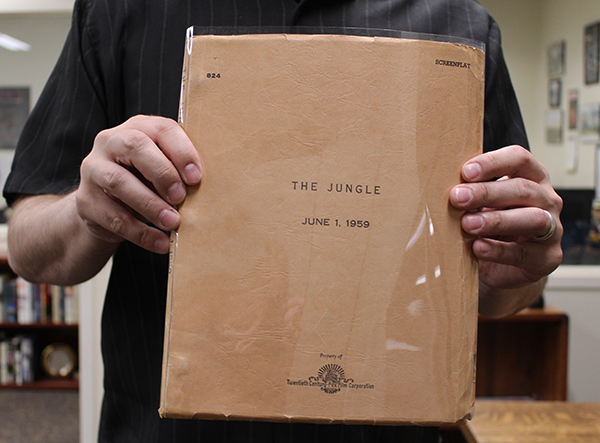 The original screenplay of James Michener’s book, “The Jungle,” completed on June 1, 1959.

“The Jungle” is from Michener’s collection of short stories called, “Return to Paradise,” and focuses on an American tourist couple traveling in the South Pacific while their marriage disintegrates. 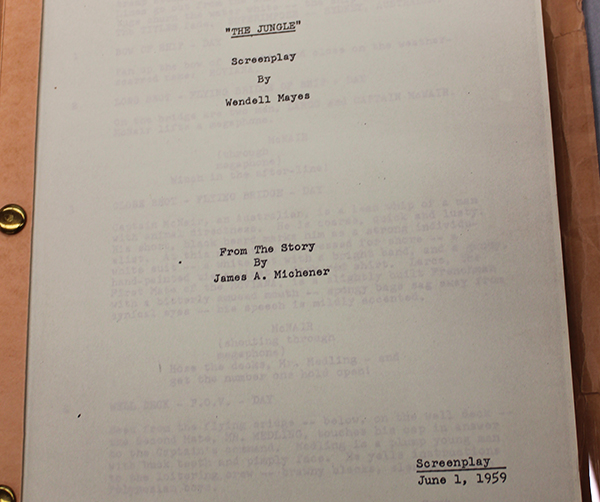 The completed, yet unproduced, screenplay of Michener’s “The Jungle” was written and compiled by Wendell Mayes, a Hollywood screenwriter who wrote the Oscar-nominated film “Anatomy of a Murder.” 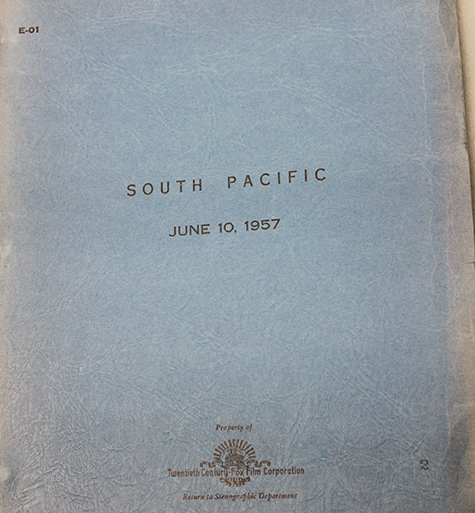 The cover of the original screenplay, “South Pacific.” It’s based on the Pulitzer-Prize winning collection of sequentially related short stories, “Tales of the South Pacific,” written by James Michener. It focuses on observations and anecdotes Michener collected while stationed in the U.S. Navy during World War II on the island of Espiritu Santo in the New Hebrides Islands, now known as Vanuatu. It was published in 1947, and the film was produced in 1958. 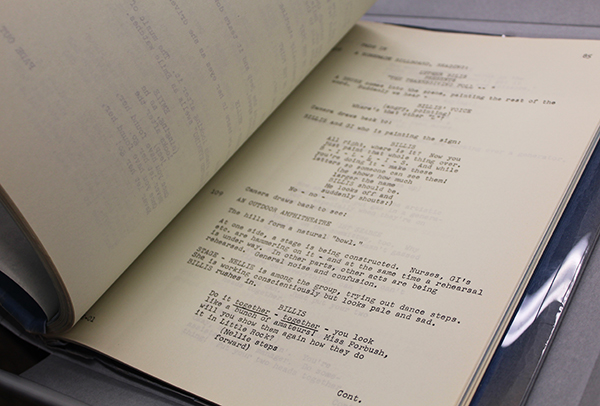 An inside view of the original screenplay of South Pacific, written by Paul Osborn, who was an American playwright and screenwriter. 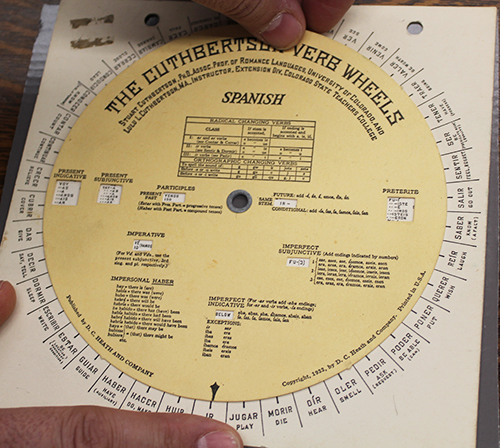 “The Cuthbertson Verb Wheels” Spanish version, produced in the late 1930s on card stock, was co-created by Lulu L. Cuthbertson, an instructor here, and Stuart Cuthbertson, Ph.D., an associate professor of Romance Languages at the University of Colorado.

This aid for Spanish verbs became a required tool for most students in UNC Spanish classes in the 1940s and 50s. 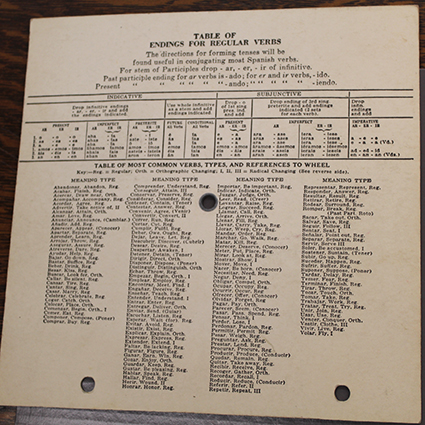 The back of “The Cuthbertson Verb Wheels” includes a table of the most common verbs.

Found a UNC artifact? Here’s what to do:

If you come across something related to UNC that you think may be of historical significance, contact Trask (jay.trask@unco.edu or 970-351-2322).

Most desired items include: