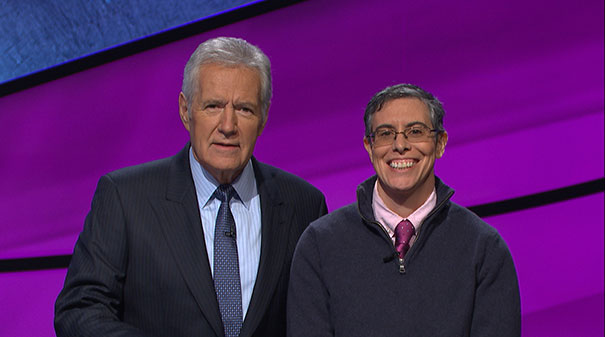 Above: Lynn Klyde-Allaman poses for a photo with game show host Alex Trebek.

Lynn Klyde-Allaman will appear as a contestant on "Jeopardy!" The segment featuring her is scheduled to be televised at 6 p.m. Thursday, March 22, on Fox (check local listings).

The self-described trivia buff and associate professor of Journalism & Media Studies will become the second member of her family to appear on the game show. Her mother, June Klyde, competed on the show in 1968 (while pregnant with Lynn) and collected prize money that paid for new carpeting in the family’s home along with a set of encyclopedias — which Klyde-Allaman and her brother eventually read extensively.

“That’s how I became so good at trivia,” she said.

To be a contestant, she passed an online test and attended an in-person audition (her second one for the show) in Denver. In addition to her experience playing trivia, she prepared by reading a book written by previous champions and visited the "Jeopardy!" online archive, where a trove of answers and questions are provided from shows that aired during the past 34 years.

Klyde-Allaman, who can’t reveal how she fared until after the show airs, found herself in her element stating questions in response to provided answers, as the show’s format requires, during her Dec. 13 taping on the set in Culver City, California.

“I’ve been shouting at the TV for so long, it wasn’t a problem for me,” she said.