Above: The Dearfield Historical Marker, donated by Anadarko Petroleum Corp. and the Greeley Monument Works, was dedicated during the 2010 Dearfield Days to commemorate the 100th anniversary of the founding of Dearfield.

The National Park Service’s African American Civil Rights Grant Program recently awarded the University of Northern Colorado $497,776 to help fund rehabilitation efforts at the African American townsite of Dearfield. For UNC Professor of Africana Studies George Junne, Ph.D., and Professor Emeritus and Research Fellow of Anthropology Robert Brunswig, Ph.D., the grant is a significant win that will help further the preservation efforts they have spearheaded at the townsite for over a decade.

Located east of Greeley along Highway 34, Dearfield was founded in 1910 as an African American farming community. The settlement, which covered approximately 20 square miles, grew to about 200-300 residents before being devastated by the Great Depression and the Dust Bowl in the early 1930s.

“There have been other black agricultural communities around the country, but this is one of the only ones that has the original structures still on it,” said Junne, who has been studying Dearfiled since the late 1980s. "At the time, it was probably one of the most famous black agriculture communities in the U.S.”

The National Park Service grant will provide funding for the exterior rehabilitation and stabilization of two buildings on the property, the Jackson House, built by town Founder O.T. Jackson in 1917 as a hotel and personal residence, and the Filling Station, also built by Jackson in 1919. That work will include hazardous materials testing and abatement at both buildings, exterior wall foundation construction, siding repair, sanding and painting and roof replacement and reinforcement. According to the proposal, the bulk of the restoration and stabilization work is expected to be completed by the end of August 2023. Remaining work, including weatherproofing, will be done by community volunteers and a larger group effort centered around the Dearfield Committee’s annual Dearfield Day Event community engagement workday in October 2022.

The preservation efforts are part of the Dearfield Dream Project, a larger collaborative research and historic sites preservation effort that is an extension of work that members of the Dearfield Committee have been engaged in for the past 13 years. The committee, created in 2008 by Greeley community members, was established to preserve Dearfield, increase knowledge and appreciation of the community’s contribution to African American efforts toward social and economic self-sufficiency between the Civil War and World War II, and provide an opportunity to teach school children about Dearfield, specifically as an example of African American efforts in achieving their hopes and aspirations of economic security, self-sufficiency and social justice. The committee serves as an advisory group to Denver’s Black American West Museum and its committee members represent several public and private organizations, including UNC, the Black American West Museum, Weld County government, the City of Greeley Museums, Colorado State University, Colorado Preservation, Inc., the City of Greeley, and Weld County Government. 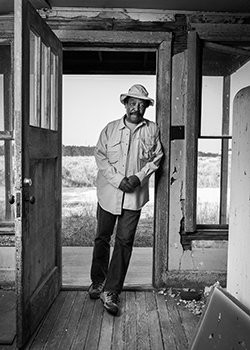 George Junne stands in the doorway of the Jackson House.

"There is immense potential here in understanding our social history,” Brunswig said. “At this particular time social justice and diversity are really very critical to this society and I think places like Dearfield and the work we’re trying to do there will really shine a light down the path of the future. There are so many different elements that are associated with this project.”

The committee’s long-term vision is to restore Dearfield as a seasonal education and research center, providing a learning experience that can be tied into the classroom. That educational experience includes plans of tours for elementary and middle school students and teachers to learn more about the history of Dearfield, and continued excavation field work that UNC’s archaeology students have been conducting for years at the site as part of their coursework.

According to Brunswig, some of that excavation has generated key knowledge about the material culture of Dearfield — things that can’t be learned through photographs and historical documents.

While the grant will kickstart some of the larger, much-needed restoration work at the townsite, Junne and Brunswig admit there is still much to do. But their vision is closer than ever to becoming a reality; there is potential for additional funding from the state legislature, and the project has begun to receive interest from private and corporate donors.

“When we began seriously planning for this grant three to four years ago, we anticipated we probably had a 20-year project. At the time I was thinking I may not live long enough for this thing to come to fruition,” Brunswig said. “We’ve been having these conversations for years about where we wanted to go with Dearfield, but it was always premature to think along those lines. We feel the groundswell is really moving, and it’s the time to take advantage of the situation.”

UNC’s Dearfield project was one of 53 projects in 20 states that was awarded funding by the National Park Service’s African American Civil Rights Grant Program this year to help preserve sites and history related to the African American struggle for equality. Read more information about the grant and view the full list of recipients on the National Parks Service website.

Donations to the Dearfield Dream Project: Private and corporate donations to the project can be made to the Dearfield Preservation Fund at the Black American West Museum. Donations help ensure that the story of Colorado's and America's African American struggles for equal justice and opportunity are preserved for present-day and future generations. Charitable tax-credit donations will go toward townsite protection and maintenance, public and school site tours, development of an on-site seasonal museum and education center, and grant match funding for a wide range of Dearfield preservation projects, including UNC archaeological excavations involving pre-collegiate and college student and community volunteer participation.