Daniel Garcia always wanted to attend college. His first attempt after graduating high school didn’t go as planned, since he was unsure of what he wanted to do and where he wanted to wind up. Eventually, he decided to gain experience in the workforce and was hired by a national carpet-cleaning company. His responsibilities grew when he became a manager of quality control and technician development. This found him traveling around the western U.S., providing training, auditing and support to numerous locations. He eventually became a district office manager covering four states for the company while living in California.

Garcia moved back to northern Colorado where he opened a small, retail business in Loveland called Legacy Vapors. However, he had to make the tough decision to close the store when the Colorado Stay-at-Home order was issued earlier this year. 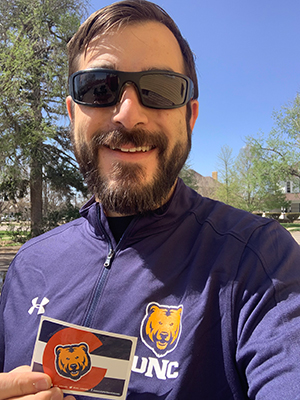 Above: Daniel Garcia takes a photo of some of the items he received from a UNC care package to congratulate him on starting his academic journey in the Aims2UNC Program.

“Overall, I learned that I could achieve goals if I worked at them,” he wrote. “If something doesn't work out, you try again or learn more about it so you can get better.”

That’s exactly what he’s doing now. Garcia is a student in the newly developed Aims2UNC Program where students start at Aims Community College and receive their associate’s degree and then directly transition to the University of Northern Colorado for their bachelor’s.

He’s working toward an Associate of Arts (A.A.) degree in business at Aims, which will prepare him to work toward his bachelor’s in Business Administration Management with a minor in Economics at UNC. The A.A. degree will allow him to enter UNC with a maximum number of credits applied to the bachelor’s.

“The Aims2UNC program seemed almost tailor-made for me,” he said. “The program is helping me stay focused on the next-level goal of getting to UNC and making that transition less intimidating.”

Garcia started at Aims in the fall of 2019. He plans to transition to UNC in the fall of 2021 and expects to graduate in the spring of 2023. Regarding his plans after graduating from UNC, he’s considering post-graduate programs in economics.

“If I'm going to invest my time in school, I think that the benefit from that extra step and further education will not only be well worth the cost, it would be fascinating to study economics in the wake of the pandemic,” he wrote.

After closing his small business due to the pandemic, he believes many non-traditional students, like himself, will want to “improve their skills to compete in a tighter workforce.”

“The Aims2UNC program will be an important pathway to support students like me who want to invest in themselves and improve their skills but need to start with the smaller campus,” Garcia wrote.

Garcia is enrolled in the College Algebra (MAT 121) course at Aims this semester. One of the assignments was to create a logo made up of conic-section expressions. The logo he chose was the UNC Bear, the most complex logo to choose from.

The project covered the conic sections, parabola, hyperbola, ellipses and circles. He used the basic expressions as a starting point to build each line segment that makes up the UNC Bear outline. He went line-by-line, changing and reshaping the expression to put the curve or angle in the correct place. Once he finished the right side of the UNC Bear, he used those expressions to mirror the left side.

The original logo that was given to students to mimic using conic-section expressions in the Aims class.

Garcia's replication of the logo after using conic-section expressions.

The conic-section expressions that Garcia used to make the UNC Bear logo.

“I've never attempted to build an image through graphing expressions but have done some graphic design work that required line-by-line adjustments,” he said.