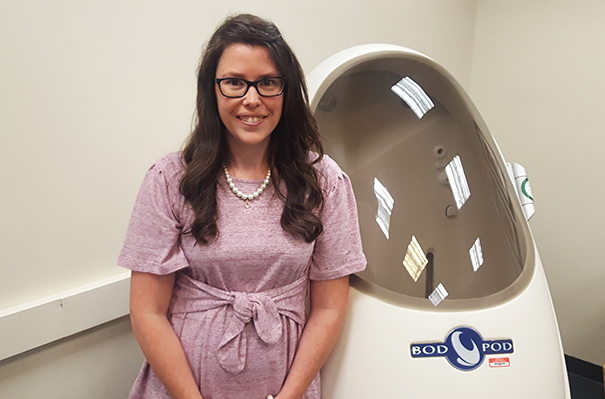 University of Northern Colorado Assistant Professor of Nutrition and Dietetics Katie Kage, Ph.D., is gaining better insights on how campus community members perceive their body fat percentages and the effects of such held perceptions.

Kage studied perceived versus real body fat percentages of 100 UNC students during the 2016-17 school year and around 50 faculty and staff members during 2017-18. Some of the results were expected.

“It wasn’t surprising to me that women more than men tended to overestimate their body fat percentage, no matter if they were students, staff or faculty,” she said. “So far, men have been the opposite by perceiving themselves as smaller.” 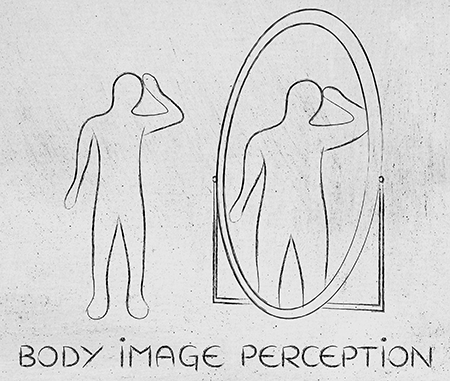 Most telling was the perceptions of body fat percentages of both sexes and in both groups correlated to high levels of social anxiety.

“We have this model of a woman in our society who should be small, and a man who should be larger in the sense of being muscular,” Kage said. “If a man’s walking around thinking that he’s small, it’s not necessarily body fat, but more so with the thought of ‘I don’t have the muscle,’ so he doesn’t feel very good about himself; we’re seeing that everybody is upset with their bodies.”

Those perceptions can contribute to stressors that affect academic and lifelong success.

According to the National Eating Disorders Association, 70 percent of 18 to 30-year-old females report not liking their bodies, and 43 percent of men of all ages report being dissatisfied with their bodies.

“It shows that we need to continue efforts on campus, even if they haven’t gotten to the point of being diagnosed with an eating disorder,” she said. “It can definitely impact their ability to perform well in school, and it comes back to the ability to be retained on campus and to graduate.”

Currently, Kage is conducting the study on student-athletes. Along with comparing male and female perceptions, she’s also comparing different perceptions among sports teams, such as an athlete in volleyball versus football.

Because student-athletes tend to have an added stressor centered around performance level, they are conscious of how their bodies perform and look.

“They’re compared amongst their peers, team members and even competitors, too,” Kage said. “If they don’t physically fit into the mold that society thinks that individual should look like, then that might have negative consequences.”

Kage, along with her student research assistants, conduct this research using an innovative and noninvasive technology known as the "Bod Pod" located in Gunter Hall. The goal of this machine is to test for body fat percentage by air displacement in under 60 seconds.

“What happens is after you put basic information into the computer, such as height, weight and sex, it reads the air in the pod before anybody’s in there, and then again when there’s someone in there,” Kage said.

Another project Kage continues to work on involves providing nutritional knowledge to UNC Army ROTC cadets by pairing a nutrition and dietetics student with a cadet for a semester to provide needed support.

“I couldn’t have done both projects without student research assistants who are all undergraduates, which makes UNC unique compared to other universities across the country,” she said.

In the long term, Kage wants to collaborate with colleagues in universities across the country to better understand perceived body fat percentages of college students in different regions.

—Written and produced by Katie-Leigh Corder