The University of Northern Colorado has created a sandbox for students in the Department of Earth and Atmospheric Sciences, but it’s not your normal, everyday sandbox — it uses augmented reality with the use of an Xbox 360 Kinetic sensor, projector and software to bring the sand to life.

The software projects contour lines (lines of equal elevation) onto topographic features in the sand, such as hills and valleys, to provide a new learning experience. The interactive landscape can be changed by shifting the sand around while the computer updates the changes in seconds. 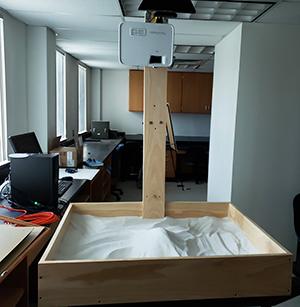 Above: It looks like a normal sandbox before powering up the Xbox 360 Kinetic sensor, projector and software program.

Watch a video of the AR sandbox in action:

Hold your hand flat and spread your fingers over the sand, and the software will see it as a rain cloud, which will cause virtual rain to fall on the topography. The rain can then flow ‘downhill’ and settle in depressions to make lakes. Evaporation can also be controlled to cause the lakes to dry up. 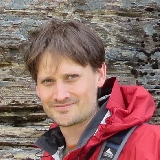 Graham Baird, Ph.D., a professor in the UNC Department of Earth and Atmospheric Sciences who helped spearhead the department's project (image at left), said this feature can be used to explain the water cycle and weather patterns associated with topography.

“We hope to start using it very soon in introductory (100-200 level) Geology, Meteorology and Earth Sciences courses and likely a few upper-level courses, as well,” Baird said. “I'm sure we will expand how we use it as we better understand its capabilities.”

Understanding contour lines and maps is a necessity for students in all Earth Science fields and beyond. Baird and other professors in the department have found that students “struggle to properly understand and interpret contour maps.” The AR sandbox will provide students a hands-on way to learn about these important areas of study and make it easier to comprehend such topics in a visual and fun manner.

Directions on how to build an AR sandbox and the needed software are freely available from UC-Davis.

Another Example of AR Sandboxes at UNC

His research will be a teaching tool for students to better understand Einstein’s Theory of General Relativity and how gravity works. The Department of Earth and Atmospheric Sciences at UNC was partly inspired by Snouffer's research project and made their own. Despite the differences in use, the construction and software are the same, which shows the flexible avenues to utilize these interactive sandboxes. 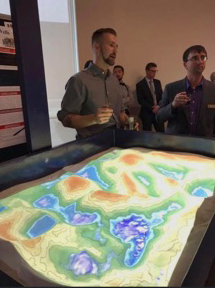