The Office for Health Promotion creates interactive programming on campus surrounding the topics of mental health, sexual health, substance use, and overall wellness.

Fentanyl is a synthetic opioid that is 50 to 100 times stronger than morphine. Drug traffickers often mix fentanyl into other drugs because it’s cheaper to produce a high with fentanyl. Fentanyl can take the form of a powder, a capsule, or can be pressed into counterfeit pills that are made to look just like prescription opioids, such as oxycodone (Oxycontin®, Percocet®) and hydrocodone (Vicodin®); alprazolam (Xanax®); or stimulants like amphetamines (Adderall®). As a result, people who use drugs can easily and unknowingly ingest fentanyl. A lethal dose of fentanyl can be as little as two milligrams—that’s a fraction of a raindrop or a few grains of salt.

Synthetic opioids, including fentanyl, are now the most common drugs involved in drug overdose deaths in the United States.

The US Drug Enforcement Administration reports that 42% of counterfeit pills tested contained a potentially lethal dose of fentanyl.
Help our community reduce the risk of opioid overdose: Visit our Preventing Opioid Overdose webpage for details about how you and those around you can avoid and respond to overdose.

Whether or not you’re new to UNC, college is an exciting time to explore and grow. One important decision you’ll make in college is whether or not to drink. You will have friends who may choose to explore alcohol and others that may not. No matter the choice you make, it is important to understand the responsibility that comes along with drinking. So, let’s be aware!

Too often, students underestimate how much they’ve had to drink because they aren’t using standard measurements, and alcohol comes in so many different shapes and sizes. So, what does one standard drink actually mean?

What is a “standard drink” in the US? 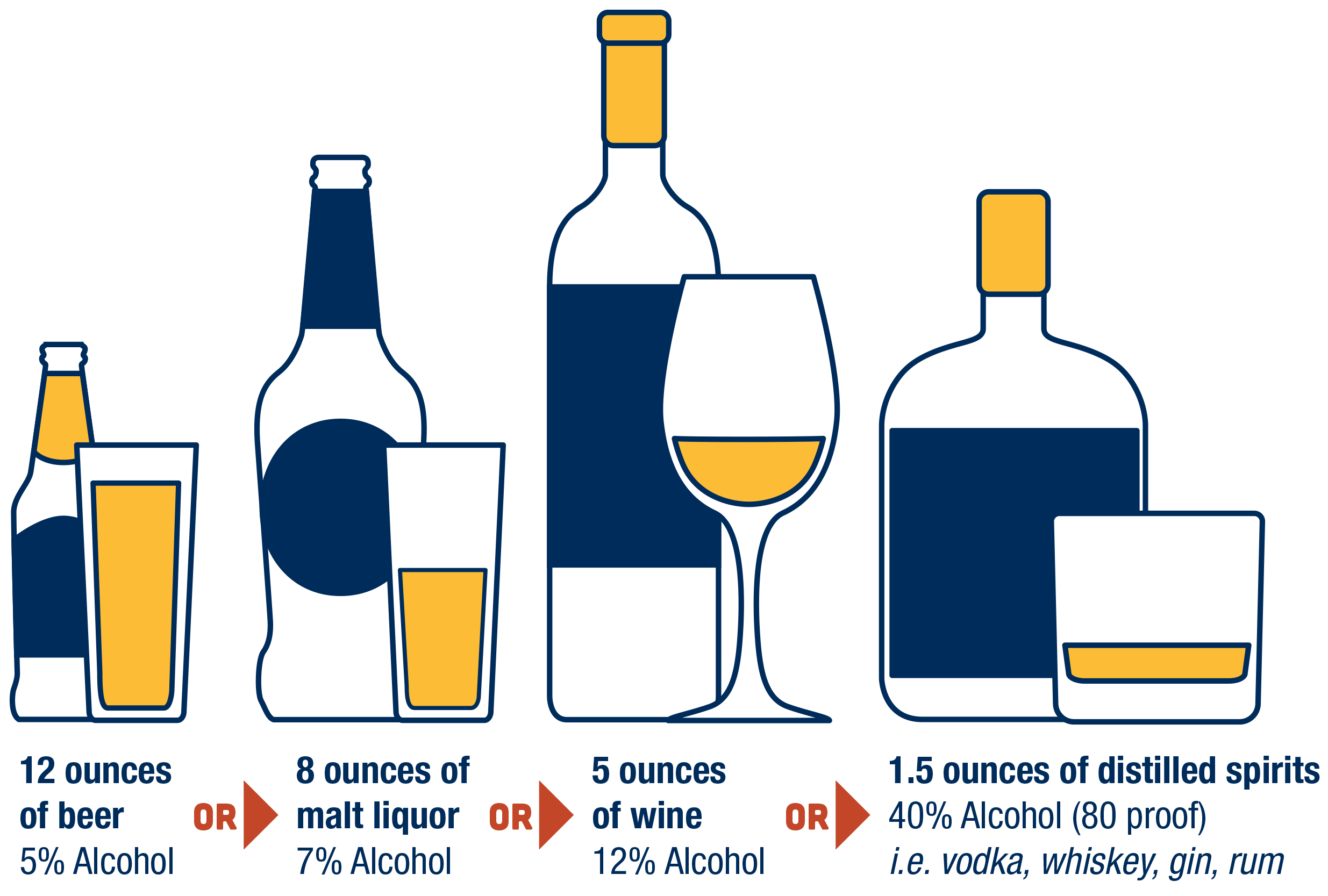 Beer: one standard drink equals twelve ounces. This is for a normal beer with 5% alcohol. Certain beers, especially here in Colorado have higher alcohol content, so make sure you read the label to know how much alcohol is in your drink.

Malt Liquor: one standard drink equals eight ounces. This is for malt liquors with 7% alcohol.

Wine: one standard drink equals five ounces. This is for wines with 12% alcohol.

Liquor: one standard drink equals 1.5 ounces. This is for any liquor that’s 40% alcohol, or 80 proof. Don’t be fooled! Tequila, whiskey, rum, vodka…etc, all have the same alcohol content. Also, keep in mind that mixed drinks may not be measured and can contain far more than what we think is in them!

Understanding your BAC is important, and helps you identify when you or a friend has had too much to drink.

The concentration of alcohol in the blood. If your BAC is .10, this means that there is one part alcohol for every 1,000 parts blood. BAC can be influenced by:

It’s important to educate yourself and ensure you have the tools to be prepared for an emergency. At UNC, we use the Safe Haven Law. Under the Safe Haven Law, if you are underage and drinking and suspect someone is at risk of alcohol and/or drug poisoning, call 911 or the UNC Police Department! If you make the call, you and the person you are calling on will not receive a citation from the police. Below are some tips for using the Safe Haven Law:

Party with a Plan

So, how do we put this knowledge into practice and drink responsibly? If you do decide to go out, it’s important to party with a plan, set a drink limit before going out, and know how you will get home safely. Below are other tips from UNC Bears:

Our Bears are Aware! And responsible marijuana use is important at UNC.

Birth control is used to prevent pregnancy. There are lots of different options out there – make sure to talk with your doctor about which is right for you!

Sexually transmitted infections also know as a STI spread from one person to another during sexual activity. STI’s are more common than you think, and lots of people who have them don’t have any symptoms - which is why it’s so important to get tested! Getting tested is simple and easy.

The Bedside box offers sexual health resources to UNC students free of charge and discretely delivered right to your door. Just select the resource you’d like included in your Bedside box, followed by your name and mailing address. All submissions will remain private, and personal information (name, hall #, email) will not be used for any other purpose aside from providing these awesome resources to you!

Students can request one free package of safer sex supplies per semester. If you have any questions, please reach out to healthpromotion@unco.edu or follow us Instagram @UNCO_OHP. Orders will be delivered or available for pickup in approximately 5 business days after ordering.