Working for the Rockies

Working for the Rockies 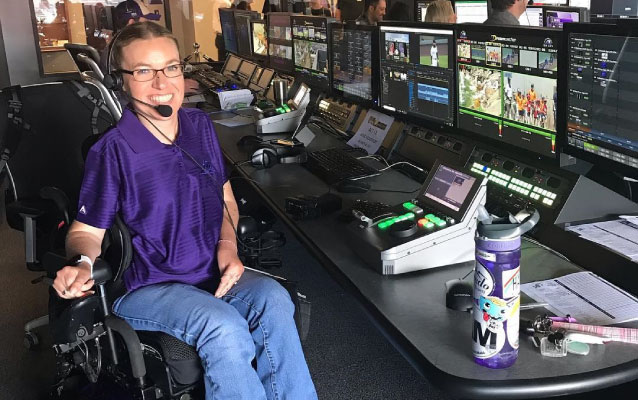 Every day Jenny Siegle ’04 wakes up and gets to go to the job of her dreams.

“I’ve always wanted to work in sports ever since I was in high school,” says Siegle.

A dream she realized early on, working as an usher at Coors Field during high school and college.

“As a teenager, I really wanted something different as a job. I didn’t want to do fast food and I didn’t want to be at the mall. I just wanted to be around sports, and I wanted to be outside and I figured being an usher would be a good job for me. It worked out to be a phenomenal job. I loved every minute of it, and I got paid to watch baseball games,” Siegle recalls.

Once she got a taste of that life, she knew she wanted more. After graduating with her degree in Journalism and Mass Communication from UNC in 2004, Siegle was offered a chance to join the Big Leagues.

“Right after I graduated, there was a posting for a video production specialist with the Rockies,” she recalls.

As fate would have it, the early connections she made as an usher and the experience she gained from her classes at UNC, helped land her the opportunity of a lifetime. She was hired on the spot.

“I run all the replays that go up on the Jumbotron. So, you know if Nolan Arenado hits a home run and you’re at the game, I replay it back real quick and you can see it out on the big video board,” Siegle says. “I also edit highlight packages throughout the game and play our victory highlights if the Rockies win at the end of the game.”

But that’s not Siegle’s only connection to professional sports in Denver. Now working as a full-time producer for Altitude Sports as well, she gets to cover the Denver Nuggets, Colorado Avalanche, Colorado Rapids, Colorado Mammoth and the Denver Broncos.

“To be able to work in Colorado at a top 20 sports market in the nation, right out of college, was very, very impressive for me. I feel very lucky and blessed to be able to come to work every day and cover Nuggets and Avalanche Playoff games and to get to go to Broncos Training camp, and during the fall I produce a fantasy football show that is nationally televised. That’s something that I take a lot of pride in."

Opportunities made possible by the knowledge and experience she gained at UNC, and the network she built along the way.

“I feel like I was very well prepared. I took a lot of the electronic film production classes at UNC and I got to work on a lot of editing equipment. Just the knowledge that I got about the business as a whole really helped me with my career and the comfort level that I had when I entered both of those jobs,” Siegle says. “You get a great education from UNC, you get great knowledge, but it’s also a lot about who you know in the field that you’re going to be working in and you really need to be conscious of how you network.”

It hasn't always been an easy road. After a lot of hard work, late nights and obstacles along the way, Siegle is proud of all she's accomplished.

“I was able to prove myself to broadcasters like Vic Lombardi and Scott Hastings, and now I feel like they respect me even though I am a woman in a wheelchair working in a male dominated field. You just have to show what you’re made of, show what you can do and not be afraid of what you want to do," Siegle says. "It honestly is a dream job that I get to do every single day."

Although her day job with Altitude Sports keeps her busy, Siegle still finds the time to work a few home Rockies games throughout the season. So the next time you’re at Coors Field waiting to see the game winning hit shown on the big screen again, a fellow Bear may be the one behind the scenes making it happen.

Siegle isn’t the only Bear now working for the Rockies. She’s among a number of UNC Alumni working at every level of the organization, all the way up to owner Dick Monfort.

Learn more about Monfort’s Role with the Rockies in this video.