Wrestler Aims to Put Greeley on the Map

Wrestler Aims to Put Greeley on the Map 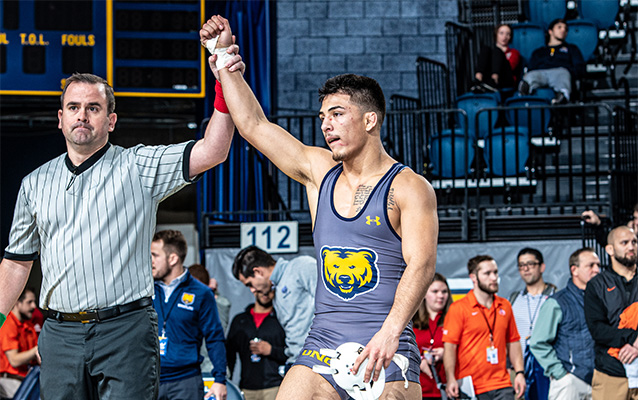 Andrew Alirez never had much of a choice about whether he would be a wrestler, but he did have options about where to compete at the college level. UNC’s program and head coach made that decision easy.

Andrew Alirez's dad and uncle had both wrestled, and his dad knew wrestling could lead to college scholarships for his four sons. So Alirez, a Greeley native, got familiar with the mat as a preschooler. When he started competing, he started winning, always keeping his eyes on the next level. As a teen, he attended regional training centers hosted at UNC, mingling with college coaches and senior-level wrestlers. As a student-athlete at Greeley Central High School, he racked up All-America titles and four state championships, as well as the No. 1 national ranking among all high school recruits.

So when it came time to plan for college, Alirez had a lot of choices. Calls came in from coaches he’d admired his whole life. But one coach in particular — the guy who lived eight doors down in Greeley — stood out to him.

Troy Nickerson was a four-time All-American wrestler out of Cornell who started his collegiate coaching career as an assistant at Iowa State. When he got a call from UNC’s athletic director, Darren Dunn, in 2014, he saw a lot of potential from a program that had just moved to Division I six years prior. He signed on and got to work.

One of his early tasks was overseeing UNC wrestling’s move to the Big 12 conference for the 2015-16 season, which came with both opportunities and challenges. In the Big 12, UNC competes against schools with deep budgets and deeper endowments. Donor gifts allow Nickerson and his staff to bring in top talent from around the country. They support scholarships that allow UNC to attract top recruits such as Alirez, who only considered programs that could provide a full ride.

"The donors are the lifeblood of our program,” Nickerson says. “Without our donors, we would not be where we are right now.

In addition to managing the direction of the program, Nickerson takes a hands-on approach to developing his athletes and making sure that every athlete who chooses UNC can thrive here.

Donors are the lifeblood of our program.

“In that recruiting process, it’s much more than ‘Can they wrestle?’ It’s, ‘What kind of background do they come from? Are they good kids? Do they have the grades? Can they be successful academically?’” Nickerson says.

His thoughtful approach also applies to his coaching style. He and his staff get to know the athletes as individuals, figuring out how to help them grow holistically.

“That’s our job, as coaches, I think,” Nickerson says. “It’s much more than just the sport. It’s coaching them through life.” So in addition to providing an athletic experience, donors allow students to receive mentorship that will set them up for success as citizens, employees and community members.

Alirez noticed Nickerson’s approach early on. When Alirez was in high school, he competed in a national tournament. He noticed college coaches lining up by his mat as he crushed his opponents. But then he suffered a tough loss, and suddenly, all those coaches were gone. All except Nickerson.

“One of my biggest things is loyalty, so I really respect that out of a coach, if they stick around and watch me even through the tough times,” Alirez says. “That makes me want to take them through the good times even more.”

Coming from a Greeley family, with a mom who holds a bachelor’s degree from UNC and an uncle who once coached at UNC, it already made sense to stay in Greeley. Alirez displays a strong sense of hometown pride.

“I kind of joke around and say, ‘I was chosen to put Greeley on the map,’” Alirez says. “I’m the first number one recruit in the country to come here, so I’m ready to take this program straight to the top. That’s what I’m gunning for.”

It's kids like [Alirez] that are going to really take this program to the next level.

He says it without arrogance, just an optimistic confidence in his skills and the ability of his teammates to rise with him. He’s had to adjust to tougher training and tougher classes at the college level. But he has the athletic tools to accomplish his goals, and he’s already encouraging other athletes to consider UNC, Nickerson says. In fact, UNC’s 2019 recruiting class was fourth-best in the nation, with three of the top 100 wrestlers choosing UNC.

“It’s kids like him (Alirez) that are going to really take this program to the next level,” Nickerson says. “He’s really our best recruiter.”

Clash in the Commons

The Bears are hosting the inaugural Clash in the Commons on Jan. 26 versus CSU Bakersfield in the Campus Commons’ 600-seat performance hall, which is typically reserved for musical and theater performances. UNC head coach Troy Nickerson and the UNC Athletics staff had long been looking for an opportunity to turn a home dual into more of an event, and the opening of the Commons provided the perfect venue.

“I remember hearing about it being built, and I was like, ‘I wonder if that might be an opportunity.’ And when I finally saw it, I was like, ‘Wow, this place is beautiful, and this could really make for an exciting event,’” Nickerson says. “Even though it will be a little smaller environment, I’m sure it’s going to be electric.”

All season ticket packages include a ticket to the Clash in the Commons, and season ticket holders will receive the first opportunity to purchase additional tickets for this unique event. Buy tickets before they sell out!

Do you know someone who might benefit from the opportunities and depth of a UNC experience like you did, and like Alirez is now? They can still apply for admission and financial aid for fall 2020.