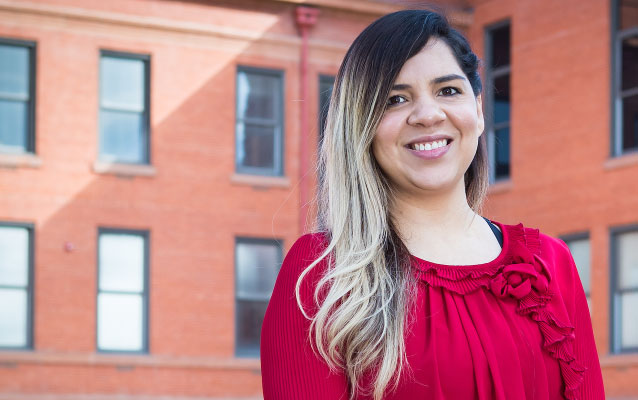 It was spring semester, 2019, and a number of business students began to file into a conference room in Kepner Hall. They’d been invited to a meeting to hear more about what they thought was a potential scholarship opportunity.

Nancy Ochoa, a senior accounting major, had received the email encouraging her to attend if she was interested in learning more about the Hummel Family Scholarship. As she sat down in the conference room, she had a lot on her mind.

The 34-year-old mom of two (18-year-old Nevaeh, also a UNC student, and 2-year-old Haven) was working two jobs and going to school full-time.

“Not being financially stable and having to manage being a mom and student life has been a struggle, especially because my youngest daughter has had some health issues. I’m usually running on four-to-six hours of sleep. It’s hard to focus with very little sleep.”

Nancy was born in Mexico and raised in Colorado. As a teenaged single parent she couldn’t afford college and worked hard to support herself and her daughter.

In 2013 she was ready to continue her education, and she chose UNC because it was closer to home and affordable, and she’d heard UNC had a great accounting program. As a DACA recipient, she didn’t qualify for federal financial aid, so in addition to her schoolwork, she continued working two jobs, one to support her daughter, and one to pay for school.

But by the time she settled into a seat in the Kepner conference room, she had run out of savings and was trying to figure out how she was going to continue to pay for school.

The Stryker Leadership Development Program helps with her tuition, but she still needed to cover other expenses like fees, books and housing. “Running on very little sleep and almost out of money, I was burning out and thinking that I was going to have to withdraw. Not knowing how I was going to pay for fall semester, I still registered for classes and just said to myself, ‘I’m going to keep going until I just can’t anymore.’”

What she (and the other students in the room) didn’t realize was that they were about to hear some astonishing news.

“When they told us that we were not there to receive information, and that they were offering us the scholarships, I began crying. I was in shock and could not believe what was happening. I had to leave the room for a little bit because I could not stop crying. After the meeting I gave Jennifer Ostenson a hug and thanked her for relieving the financial stress off my back.”

Twenty-five students received an $8,000 scholarship that day, thanks to a gift from the Hummel Family Foundation, which was established in 2015 by Dr. Robert and Carole Hummel with their children, Rob Hummel and Jennifer Ostenson. Dr. Hummel earned his veterinary medicine degree from Ohio State University and went on to co-found a business that grew into Animal Health International — one of the largest animal health distributors in the nation.

“When my father was going to school, a gentleman gave him $200 towards his college education and he said, ‘The only thing I ask is that someday when you’re able, please support some students and help them out as well,” says Ostenson. “All his life, it stuck with him.”

And in that conference room in Kepner, that moment of 60 years ago replayed itself 25-fold, inspiring a new generation to succeed — and give back.

“I feel extremely blessed to receive this scholarship,” said Ochoa. “Because of this scholarship I will finally be graduating in December. I promise I will pay this forward one day.”