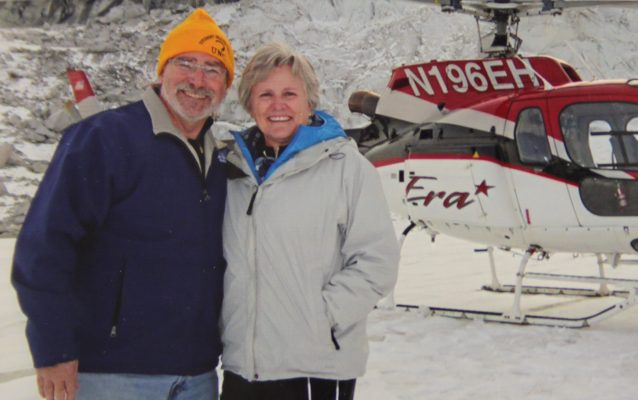 Love can mean many things – a passionate emotion; a thing or person of affection; and even the score in a tennis match.

Sit down with Ken and Beth Richards and it is hard not see love woven into their life as a couple and into their philanthropic passions at UNC – tennis, theatre and the students who take the court and center stage each season.

Their story, like all stories, begins with how they met.

“It was a football game,” Beth smiles as Ken begins to share the story.  “I was with my fraternity brothers, she with her sorority sisters. It was raining and there she was sticking it out in a dress…”

Beth interrupts and corrects Ken, “it was a jean skirt!” and they laugh as Ken continues.

Ken and Beth were both undergraduate students enrolled at the University of Kansas attending a home football game in Lawrence.

“We made plans to meet after the game, it was a Kansas versus Nebraska game, and [Beth] was there with some of her family who were from Nebraska.”

Nebraska won that day, but it didn’t matter much, Ken had met Beth and that was the start of their romance.

As an undergraduate, Ken was enrolled in ROTC, which meant that his and Beth’s life would be a series of moves and relocation based on military assignment. They made eight moves together during Ken’s 24-year career as a military surgeon.

Throughout that time, tennis was a constant for Ken.

“I began playing at age 8,” shares Ken. “I took a break to play other sports, but in high school my father’s tennis partner needed someone to play for the school team, so my father volunteered me.”

Ken has been playing ever since; following in the steps of his father, both in military service and love for the game.  The father-son sports connection was part of the inspiration that led the couple to later establish the Richards Men’s Tennis Fund, named after Ken’s father Max Richards. 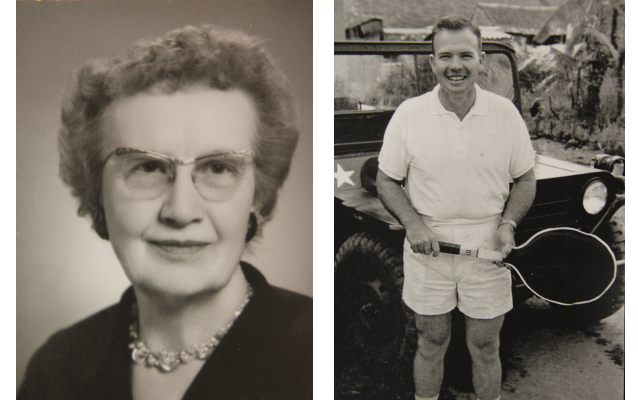 And while Ken’s life may have been a volley between military assignments, Beth’s background was deeply rooted in one place – Greeley, Colo.   Beth was raised in Greeley, went to high school in the city and her grandmother had even attended UNC in the late 1930’s and early 40’s when the institution was named the Colorado State College of Education. It was after Beth’s grandmother that the Marie H. Diggs Memorial Scholarship was named, established to support the education of nontraditional female students, as Beth’s grandmother had been.

When it came time for Ken’s retirement from military service, these family roots pulled Ken and Beth back to Northern Colorado.

After two decades of living the life of relocation, the Richards decided to make their final move to Greeley. Beth’s mother still lived in the city and Ken had the opportunity to begin a civilian career as a surgeon with Northern Colorado Medical Center. Once settled, the couple began exploring their community involvement and they soon found a place for their interests at UNC.

“I look for a place to make a difference,” shares Ken. The Richards speak humbly of their philanthropic involvement, but like many donors their support is instrumental in helping current UNC students pursue educational passions and career aspirations.

Each year, these scholarship recipients send their stories and notes of gratitude to the Richards, and it is clear the affection students have for Ken and Beth.

“I have loved getting to know you over the past three years. You have a wonderful love and appreciation for theatre. In a career path that is not always taken seriously, it has been so great knowing you are in my corner.”

“Your funding is a catalyst in this building of Bears tennis, and will continue to help us for years to come.  Your support is greatly appreciated; we love you Dr. Ken. Hope to see you out this spring.”

“At the age of 33, I have decided, in spite of my fear and finances, to finish my schooling and graduate with a degree in Elementary Education. I am thrilled to be a student at UNC, although the work is difficult, I am gaining insight and knowledge to impart on my future students…Beth Richard, I thank you again for such a generous scholarship.”

Of course the expression of gratitude isn’t what drives the Richards to give, but it is clear that their love for UNC is played out in the lives of students that they meet.

Thank you to Ken and Beth Richards, and to the entire university donor community, for their love and support for the students, faculty and programs of UNC.

It has been fifteen years since the Richards made Greeley their home and their love for UNC continues to thrive. Ken and Beth are now planning for Ken’s second retirement from private practice, which should free up more time for Ken to play a practice match and for Beth to continue supporting UNC arts. But until then, the couple will spend their Valentine’s Day on an Antarctic boat expedition.  We hope that they love every moment.