Food Prep 101: Cooking with a Pair of Bears

Food Prep 101: Cooking with a Pair of Bears 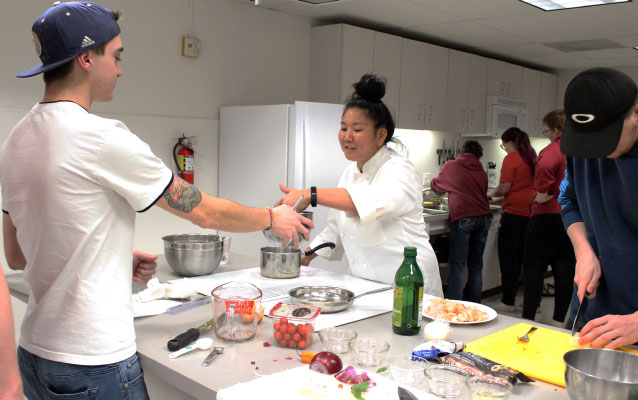 When alumni Darci Hata ‘10 and Ian Mickells ‘09 first arrived as students at UNC, a career in cooking wasn’t part of the plan.

“She was an education major,” says Mickells, who was studying communications at the time.

“When we first met, we were brought together by food,” Mickells says. “We started a student cooking club - Cultural Culinary Creations.”

“It was just something fun to do with friends really. We ended up doing catering for professors as a way for our club to raise funds,” Hata says. “Then it just became something more. The next step was, let’s try to go to culinary school.”

Today, Hata is a certified sous chef through the American Culinary Federation and Mickells is the production manager of Holmes Hall for UNC Dining Services. 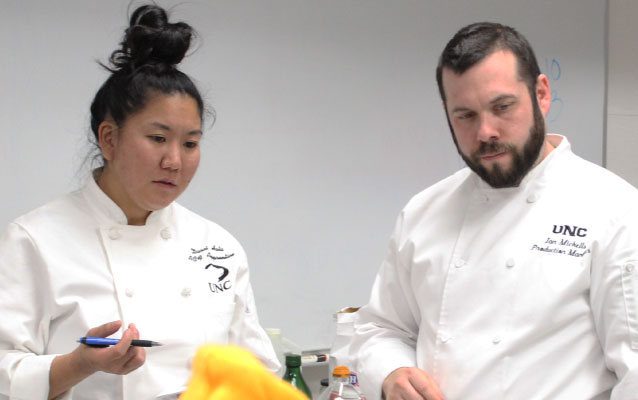 The class is the brain child of Mickells and Dr. Richard Jurin, head of the Environmental and Sustainability Studies program at UNC. In 2015, UNC had the opportunity to lease three-quarters of an acre of land from WiseAcres Farms in Greeley to give Environmental Studies students hands on experience.

“With the farm at the time, there was a need for this class. Students were learning how to plan a farm, grow the food, harvest it, sell it but then they had no idea what to do with the food they were harvesting. That’s when they decided to do a cooking class that would teach students how to work with the food they harvested,” Hata says.

For the last two and a half years, Hata and Mickells have taught students everything from knife techniques and proper plating to mother sauces and meat fabrication.

“The cheapest meat is typically chicken, so we teach them how to butcher a whole chicken. Each group gets a whole chicken, they learn how to cut it down and get all the pieces out. It shows them that you can do so much more than just going to the store and buying chicken breasts. You can buy a whole chicken and make five meals out of it. You can even turn it into chicken stock,” says Hata.

As an Environmental Studies course, the class also makes a trip to WiseAcre Farms to start the semester.

“I have them walk down the rows, and do a little work, just so they can look gain a better respect for where our food comes from. Although food can sometimes be expensive, knowing that people work really hard to put food on our tables the students can see why we need to pay those laborers well for the food that they’re growing. It’s good to appreciate where our food comes from,” says Hata. “A lot of them learn to appreciate that food doesn’t just come from the supermarket, it comes from a farmer, whose family depends on it. That’s the whole idea of Environmental Studies is thinking holistically.”

With that bigger picture in mind, these alumni hope their fellow Bears walk away from the class with a broader view of the world, and the knowledge to get creative with their cooking.

“It’s just fun to be able to give back to the students,” Mickells says. 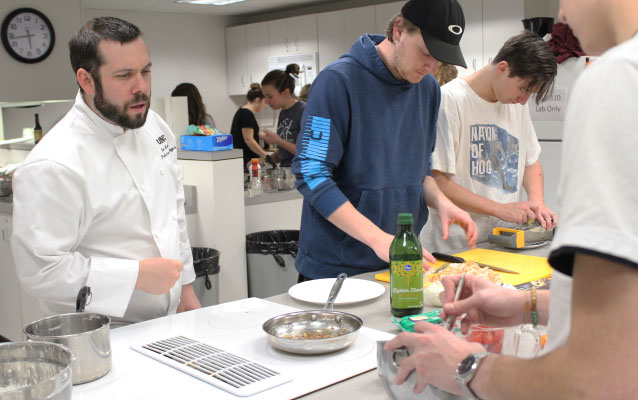 “I never would have guessed that I would be doing this when I started. I didn’t even think I would be in Greeley for this long. I came to UNC from Hawaii, and now this is home. We have a daughter, this is where we live, we work here, and we love it. We’ve been lucky,” Hata says.