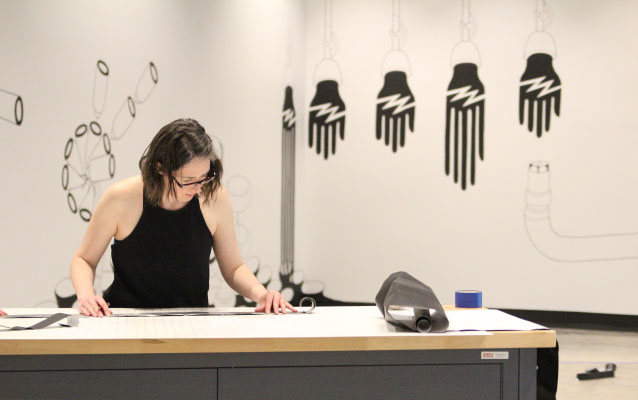 UNC Arts Alumna Jessica Forrestal is back in Greeley and making her mark on the brand-new Campus Commons. Forrestal was invited to be the inaugural Artist-In-Residence at the Campus Commons Gallery and she’s been working in the state-of-the-art facility since mid-December to bring you “Constructs and Confines.”

“It’s awesome to be back. The support is just amazing, and I know that a lot of my professors have always been cheering me on and have stayed in touch and that’s really great,” Forrestal says.

Known for her hand-drawn black-and-white large-scale drawings, Forrestal has transformed the Campus Commons Gallery into a playful, industrial space that challenges the concepts of quality, disposability and time.

“I think about aesthetics and how we’re drawn into spaces and how we’re drawn to consuming things and what convinces our eye that we need to have it,” Forrestal says. “So there’s this design element in all of this stuff we acquire and we somehow think it’s somehow going to change our world. The stuff itself is incredibly permanent, but in our lives, it’s considered very temporary and, in many ways, discardable. When you’re done with it you just throw it away or give it to a thrift store and someone else has it."

Much of Forrestal's work explores this idea of American consumer culture, mass production, consumption, and disposal of objects that are meant to improve functionality. She often draws inspiration from Ikea manuals and assemblage.

“We’re all going to Ikea. We’ve essentially cut out the labor and we’re doing it ourselves, so all they have to do is manufacture the parts and we pick it up and put it together. There’s a lot of stuff there with the economics and politics of consumerism that I’m thinking about as I’m creating, but then there’s also this humorous side of it,” Forrestal says. “I like bringing the pieces alive and making them seem like they have a life, so that maybe we consider those pieces in a different way. You know the next time you go to make a consumer choice, thinking about the life and the politics of that object.”

Forrestal has worked to create a fully immersive space in the commons, extending her larger than life drawings onto the floor and out of the room.

“These objects kind of envelope you and invite you in to their new world,” Forrestal says. “Considering art in a different way, considering objects in a different way. That’s really ultimately why I do what I do. Why I don’t make paintings. Why I do large drawings of objects. I want people to think about it differently.”

“I wouldn’t be where I am without all the work that I did as a student here,” Forrestal says. “I used all that work to apply for MFA’s and that’s what got me to Brooklyn. My professors were just so helpful and so great and so supportive, and I really needed that at that time.”

You can learn more about how Forrestal’s experience at UNC impacted the trajectory of her work at an artist talk scheduled for Thursday, February 21 from 5:00 to 6:00 p.m. in the Campus Commons Gallery.

“Constructs and Confines” will be on view in the Campus Commons Gallery until March 30, 2019. 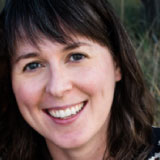 Jessica Forrestal holds an MFA in Fine Art from Pratt Institute in Brooklyn, New York, a MA in Art and Design from University of Northern Colorado and a BA in Art from Colorado State University.  Jessica was recently an artist-in-residence at the Firehouse Art Center in Longmont, Colorado where she debuted a new collection of wall drawings. She was also awarded the opportunity to display her work publicly by a Brooklyn-based non-profit called SaveArtSpace. She has participated in group and solo shows in Brooklyn, New York, and in the Denver area.