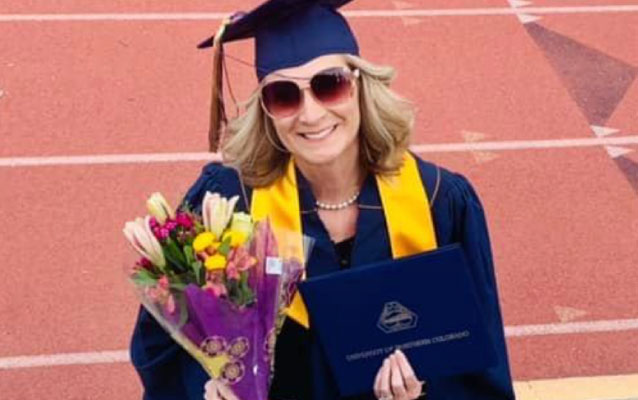 Heather Anderson '21 celebrated her graduation from UNC in May 2021.

In May 2021, new UNC grads had a lot to celebrate. They had weathered the upheaval caused by the pandemic and were walking across the commencement stage in-person, with a huge sense of accomplishment.

Among the sea of blue and gold, Heather Anderson was graduating with her bachelor’s degree in Human Services as her husband and children watched from the stands. “That's a part that always gets emotional,” Anderson says. “Even my husband was tearful. He said, ‘I've never been prouder of you.’  It’s also a great feeling knowing that two of my children are college aged and that I was able to do this part of life alongside them.”

After graduating from high school, Anderson enlisted in the Army, where she served eight years as a Blackhawk Flight Medic, supporting Airborne and Special Forces operations.  After earning her associate degree in arts in 2000, she married and had three children (now 21, 18, and 17).   Along the way, she worked at the Cheyenne County Chamber of Commerce in Nebraska, transitioning to work for them as a tourism director.

“I liked the Chamber work so much because it's so community-minded,” she says.

She moved to Greeley about three-and-a-half years ago, then found herself, like so many others, experiencing job loss because of the pandemic.

“At that point, I thought, ‘I've always wanted to finish my degree. I'm right here. UNC is right here. I have family and friends who have gone to school at UNC.’ My husband and I were talking and he said, ‘go for it,’” she says.

The decision made, Anderson says it was still a daunting step to take.

“I didn't know what it was going to be like, what to expect. I was nervous. I’d been out of school for so long. So, I applied and was accepted just weeks before the beginning of the fall semester.”

She had her transcripts sent from Chadron State, then learned that they’d accepted most of her credits – enough to transfer to UNC with just two semesters left to earn her bachelor’s degree.

“Once I was accepted, and knew where I was with my transfer credits, I determined I was going to be a Human Services major,” she says.

Anderson says Human Services prepares students to work with a broad range of populations in a variety of settings, whether they want to work with youth, veterans or an aging population. As a veteran, she was particularly interested in working with the Veteran’s Association, and the coursework also spoke to her interest in helping communities. Once she made up her mind about an area of study, she connected with her advisor, David Greene, PhD, associate professor of Human Services.

“He was amazing. He was just really good about walking me through a lot of stuff and understanding too, that all my classes were going to be online,” she remembers – something that was a new approach to learning for her.

“I just absolutely loved it. It was the best educational experience that I have ever had. It was fun and engaging and, albeit online, I never felt a disconnect. I felt like my professors found ways to connect us as students.”

By May, Anderson had graduated with a 4.0 GPA. Upon graduation, Greene presented her with an Academic Achievement Award. Then, in September, she became the director of Visit Greeley, a position that speaks to her interest in community. 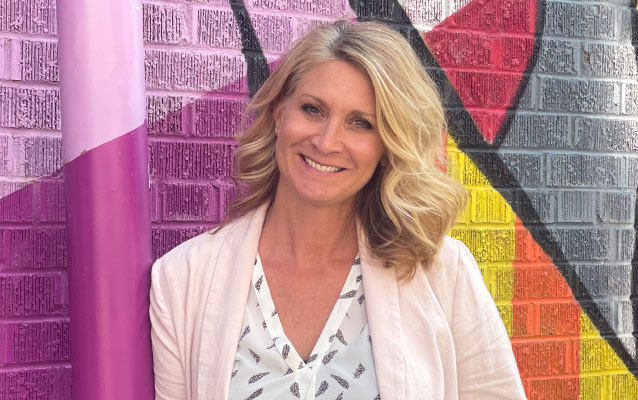 “I think what it boils down to is my love for working with people and finding ways to help whenever I can,” she says.

As a UNC alumna working in Greeley, she sees many ways the community and university connect and interact.

“Greeley is still warm and welcoming. You see Bear pride everywhere in all of the “Bear Country” yard signs and in businesses. There's really great support here and I know for myself, I'm proud to say that I graduated from UNC and that I'm an alumni. That's a really great feeling! And I'm proud because I appreciate this school. It really was one of the best experiences I've ever had in my life.”

It’s an experience she hopes other veterans will also take advantage of.

“I would like to say thank you to all the fellow veterans who have served their country. And to say those education benefits you received through your service are very well deserved," she says. "I really encourage anyone who has those benefits available to see what programs are available, and to let UNC staff help you utilize that.”