Continuing a Commitment to Service

Continuing a Commitment to Service 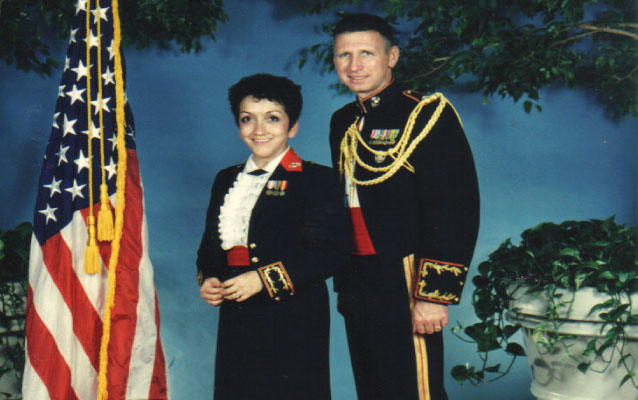 Woody and Lori (Garcia) Sadler '67 (shown here in Mess Dress in a 1985 photo) established a scholarship endowment for students enrolled in the Marine Corps Platoon Leaders Course (PLC) or a Marine Corps program at UNC that leads to a commission in the United States Marine Corps.

For Lori (Garcia) Sadler ’67 and her husband, Woody Sadler, a commitment to service and making a difference has been a common thread through their military careers and beyond. Now, they’re helping future generations of students with the Colonels Lorraine M. Garcia Sadler and Woodson A. Sadler Jr. PLC Scholarship Endowment for students enrolled in the Marine Corps Platoon Leaders Course (PLC) or a Marine Corps program at UNC that leads to a commission in the United States Marine Corps.

Lori was born in Greeley and graduated from UNC in 1967 with a degree in Spanish. She also attended the University of Mexico D. F. in Mexico City. She graduated from The Woman Officer School at Marine Corps Base, Quantico, Virginia.

“The Vietnam War was ongoing, and we had draft dodgers avoiding military service and leaving our country. I believed then and still do today, that this is our country, my country, and I needed to serve. I needed to do something to show my appreciation for all the blessings my family and I were given as citizens our great country,” she says.

She was commissioned as a Second Lieutenant in 1967 and returned to Quantico for further training.

A year earlier, on the other side of the country, Woody graduated from the Virginia Military Institute with a B.S. in Civil Engineering. “I went directly into the Marine Corps and right over to Vietnam,” Woody says. When he returned, he was stationed in Guantanamo, Cuba before going to Quantico for Communications Officer’s Course.

And there, at a dance, their paths crossed.

In the span of those two and a half decades, the Sadler’s covered a lot of ground – literally, and in terms of their distinguished careers.

In Hawaii, Lori served in the Intelligence Division of Fleet Marine Forces Pacific, where she was a counterintelligence specialist. Woody served with the Marine Aircraft Group. After leaving Hawaii, Lori served as a platoon commander at Woman Officer’s Candidate School in Quantico. Woody transferred to Okinawa with the 3rd Marine Division as the commanding officer of two artillery batteries. When Vietnam fell and Cambodia went to the Khmer Rouge, he was part of the operation which pulled Americans out of Cambodia.

Returning together to Washington, Woody served at Headquarters Marine Corps and was selected to be the Marine Liaison to the House of Representatives. He worked on Capitol Hill for three years. In D.C., Lori attended the Defense Intelligence School and worked in the Defense Intelligence Agency. Their next move was to Camp Lejeune, North Carolina, where Lori was Asst. Chief of Staff for Intelligence (G-2) for the logistics command. Woody was the commanding officer of a general support artillery battalion. They returned to Okinawa where Lori was the Asst. Chief of Staff for Intelligence at III MEF, and Woody became the Marine Corps liaison with the Japanese Ground Defense Force in mainland Japan.

After the tour in Okinawa, the Sadler’s headed back to D.C. where Lori served in the Intelligence Division branch and liaison to foreign Naval Attaches at HQMC. Woody served on the JCS staff and in the Secretariat for the Secretary of Defense. From there, they moved to California, where Lori became the first female to be the head intelligence officer (G-2) for the 1st Marine Expeditionary Force and Woody was the commanding officer for Headquarters Battalion, 1st Marine Division.

Crossing the country again, they moved back to Washington, D.C. where Lori became the Deputy Director of Marine Corps Intelligence during the first Gulf War, and Woody was assigned as the Assistant Chief of Staff for Legislative Affairs.

In 1989 Lori became the first Hispanic woman to be promoted to Colonel in the United States Marine Corps. Both Lori and Woody retired from the USMC as Colonels. Woody’s final tour was as the commanding officer of the NROTC at Virginia Military Institute, where he’s been an adjunct professor in the Civil Engineering Department for 30 years. Lori has a second career in real estate.

“We both had great careers,” says Woody. “We progressed right along with each other. And they kept promoting us, so I guess we did a good job.”

Lori and Woody are also involved in Rotary, and have traveled domestically and internationally serving others, delivering wheelchairs in Guatemala, Mexico, Columbia, the Caribbean Islands, and Guyana, and working on water and sanitation projects in Bolivia.  Woody became the District Governor for Rotary District 7570 which included the western part of Virginia and the eastern tip of Tennessee.

Through their work in the Marine Corps, service, teaching and mentoring were their core principles. Even though Lori didn’t pursue a teaching career, she was still guiding and working with young people and impacting their lives.

“After you graduate and you're an officer, you're a teacher.” Woody says. “You're working with the same age group of young people — 17, 18, 19 years old. You're teaching them to be Marines, but you're also mentoring them as you go along,” Woody says. “They're away from home, so you're the person they can come to if they have problems, and you provide guidance. You’re mentoring and teaching when you're in the service and you really don't realize until later that you do make an impact, just as the professors in colleges do on their students.”

As they reflect on their college experiences, they are also making a difference for students through their endowment, which will provide scholarships now and eventually through their estate.

“When we were in school, the guys in ROTC used to get a stipend each month. It wasn't much, but it was still something. But in the PLC program we never received anything because that wasn’t part of our program. We thought that what we would do is set up an endowment so that anybody that was going to be going through a program into the Marine Corps would at least have a little bit of spending money,” Woody explains.

Lori, who was the first in her extended family to go to college, lived at home while she was at then-Colorado State College, working up to 30 hours weekly to help her family pay for school, including working at a department store, or working in the fields picking beans, cucumbers or sorting potatoes.

“I had two really good friends who were not from Greeley, attending UNC with me. I was living at home. I can remember they came over for dinner and my parents fed us. They had been living on cans of corn for a few days. It was a struggle for a lot of kids,” Lori remembers, as she shares her thoughts on the importance of helping students with an endowed scholarship. “I would like to be able to help so that they don't have to subsist on corn for a week.”

Asked what advice they’d offer to students pursuing a career in the military, Woody says, “What they gain in college and in their training during the summers will help them when they graduate. If they’re going into the Marine Corps, it prepares them for additional training and leadership roles. In the Marine Corps, you’ll be given a lot of responsibility at a very young age. The experience you will get in the Marine Corps is just unbelievable. You’re working, leading young people, and you’re responsible for a lot of equipment and training. You really mentor the people who are under you. So just keep your eye on what you're going to be doing. You are going to help guide and mentor people besides being a Marine.”

Colonel Lori and Woody Sadler say they both had rewarding and fulfilling careers in the United States Marine Corps, and that they remember they were both young once.