Dreaming Big and Giving Back

Dreaming Big and Giving Back 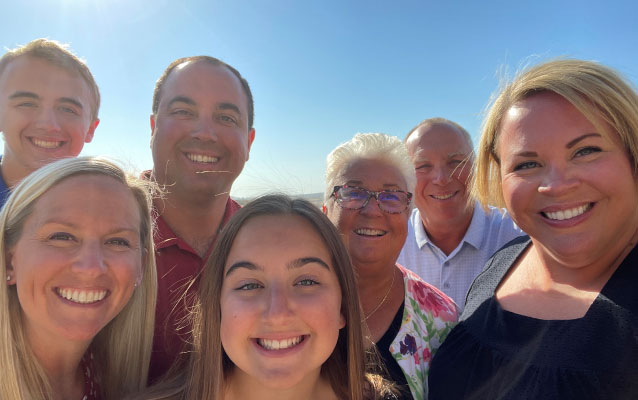 Molly Burich ’05 may be many miles from Greeley, but she carries her UNC experience with pride, and is making sure others have access to UNC’s educational opportunities in ways that will help future generations dream big.

Burich was born in Wisconsin (which made her a Green Bay Packer fan for life). “My dad’s job took us on a little bit of a journey,” she says. The family moved from Wisconsin to Chicago to Indiana, finally settling for her high school years in Colorado Springs.

When it came time to choose where she wanted to go to college, she visited UNC and Colorado State University. And even though she was a pro at moving, this time relocating to a new school would be something she’d do without family to ease the transition. CSU was overwhelming, she says. “I remember leaving there feeling petrified. Then when I went to UNC a couple of weeks later, I just felt a real sense of connection to the campus. It felt manageable, big enough, but not overwhelming. From the first moment I was like, ‘Okay, I could do this, I could live away from home.’ And that was it,” she remembers.

She had originally put UNC on her list of schools to explore because she thought she wanted to be a teacher. Then, in the residence hall one night during UNC orientation, she picked up the course catalog and began to look through it. She came across course listings for political science, and in that moment, changed her mind – and the course of her career. The next day she listed her major as Political Science.

Her advisor was Brook Blair, Ph.D., professor in Political Science and International Affairs. “He, too, is a Green Bay Packer fan. So, we did bond over football,” she says. He was her professor for the introductory Political Science class, and she knew even during her first semester that she had found her academic and professional path. From that first day she says she never looked back.

Her second semester, she started to meet more people and made friends she remains close to. Her sophomore year she became a campus tour guide. “I was always trying to convince people to be a political science major,” she says.

“It all just clicked. It was just such a magnificent college experience,” she says.

After graduating from UNC, she earned her master’s degree in Public Policy at DePaul University in Chicago in 2007 and went on to take a position at a health policy consulting firm in Washington, D.C. There, she discovered she loved health policy. Her clients were pharmaceutical companies and – as has happened throughout her career – she found herself working at the center of pivotal changes and current events as they intersected with health care.

“This was during the Obamacare debate. I was reading every piece of legislation, every version that came out and summarizing it for my clients. So, it was a really exciting time to be new to health policy, to be living in D.C., to be working a million hours a week and making no money,” she says with a laugh. “But that's what you did to build that resume. And so, I did that.”

As time went on, she moved through her career, changing companies and building skills. She began to work in federal policy and took an opportunity with her employer at the time, Otsuka America Pharmaceuticals, to move to California to be a state lobbyist across seven western states. She moved to a different company for a time, and is now back at Otsuka, leading the health policy team located in Princeton NJ.

Once again, her work has intersected with current events. During the COVID-19 pandemic she found herself having conversations around the kitchen table with family and friends. “I remember I was sitting at the kitchen table with my family at Christmas in Colorado, talking about the clinical trials for the COVID vaccines. And I was like, ‘You guys, the clinical trial for these products are really large and are providing some really important data,’” she says. “On the one hand, I think (with COVID-19) there is now more understanding and appreciation for clinical trials and for what it takes to bring products to market, which is great. On the other, I think we still have more work to do explaining that didn't happen overnight and it didn't happen without sacrifice.”

As she talks about her career and the challenges she’s seen over the 12 years, it’s not hard to see that the decision she made one night in a residence hall at UNC has given her a path to work she loves.

“I think my career has exceeded what I thought was possible, but my love of policy was sort of born and cultivated at UNC in the Political Science department,” she says. “I attribute it to talented professors who had a lot of good debates in class and presented a lot of different sides. I absolutely credit the UNC Political Science department for helping me find that passion and then really cultivating it.”

It’s something she hopes others will also experience during their college years.

“Here I am, I was this girl who went to UNC, had a great experience, and now I regularly interface with members of Congress and talk to them about healthcare issues including the needs of those living with mental health challenges,” she says. “I have this fabulous career and sometimes -- especially now with everything being virtual (due to COVID) -- when I sit at my house in my home office in slippers and leggings talking with members of Congress on a Zoom call I'm just like, ‘Whose life is this?’

“I would just say, dream big and get as much out of that college experience as you can, because it's such a foundational piece. I look back on it so fondly, and that was because I was part of a great department at a great university. I don't ever doubt that's why that was so.”

It’s because of her experience at UNC and its impact on her career that Burich chose to establish the Molly Burich Political Science Scholarship Endowment, to be awarded to junior or senior Political Science majors, with a preference for female students.

“I always knew that I wanted to be able to give back to UNC and started relatively early, as soon as I could,” Burich says. “I'm so thankful that I was able to understand how to do it in a way that we can set up this award now that's going to continue over time. Once I realized it was possible to think about establishing a scholarship, then I was laser focused on wanting to do that. For me, it's a way to give back and give back to a wonderful department that really shaped my life and my career trajectory.”

She says she’s excited that in a few years, she’ll be able to connect with students benefiting from her scholarship endowment. “As an alum who lives across the country and can't be active in local events or go visit campus, this is a way I can have that lifelong connection to the college while helping to reward and hopefully cultivate more strong women in the political science field.”