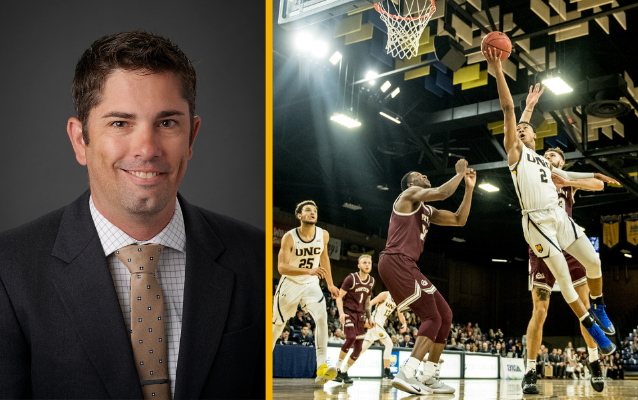 Jason Alvine has been a Bear since around the time that UNC’s football team won back-to-back national championships in the 1990s. Back then, he was a student, staying late in Candelaria Hall to edit projects as part of his Journalism and Telecommunications studies. Now, he’s starting a new season behind the mic as the newest Voice of the Bears, announcing football and men’s basketball home games.

This fall, as COVID-19 has forced tough decisions delaying athletic seasons, Alvine has a less-than-normal schedule. In a typical year in his new job, he’d be hosting a coach’s show with Head Football Coach Ed McCaffrey on Tuesday nights; instead, he’s hosting Inside the Bear’s Den on KFKA 1310. There, he interviews coaches, athletes and alumni, giving them an opportunity to share their stories.

Like so many sports fans, Alvine is excited for sports to begin again; Big Sky basketball is scheduled to kick off Nov. 25.

“I think we all kind of miss the camaraderie that sports allows us,” he says. He’s looking forward to McCaffrey’s and Men’s Basketball Head Coach Steve Smiley’s first seasons as head coaches. He’s poised as a brand ambassador for the university, and he’s ready to invite his family and fellow alumni back to the stands in the future. In the meantime, he praises the way coaches and players have made the best of a tough fall.

“For them to continue to hold out and stay positive, it was nothing short of amazing,” he says of the Bears he’s interviewed.

A native of Loveland and the son of a football coach, Alvine considered walking on to UNC’s football team when he started his student career, but injury and a recognition of the caliber of UNC’s players gave him pause. Instead, he got his sports fix by attending UNC games and, for an internship, calling color for high school football games for a local TV station in Loveland.

He remembers his UNC professors for going “the extra mile” to make sure their students were well-prepared for careers in the real world. In his first reporting class, he says his professor based grading on a journalistic axiom: “Facts matter. You have to have 100 percent accuracy.” The professor followed through, assigning zeros on work that contained factual errors — thus, Alvine says, pushing students to be the very best they could be.

He continued working at the TV station in Loveland until it shut down, then moving into radio despite never having taken a radio course. In 2009, he returned to UNC to call women’s basketball games for ESPN 870. From there, he earned a master’s degree in Athletic Administration at Idaho State, worked as the Director of Operations for Montana State’s women’s basketball team and called Montana State sports. Then, the opportunity to return to UNC arose when COVID-19 cuts ended the career of the previous Voice of the Bears, longtime announcer Troy Coverdale.

“I respect the heck out of Troy Coverdale and what he’s done for this university,” Alvine says. “To be somewhere 17 years, and be the voice of a university and an institution for 17 years, I mean, it’s the goal and the dream for a lot of people.”

His advice to students interested in that kind of dream? Go for it, work hard, and make it work.