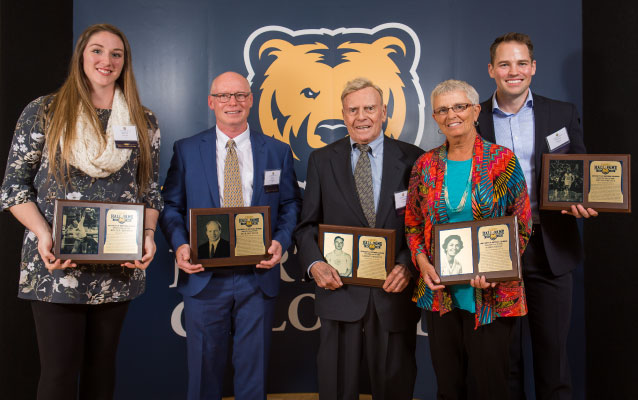 Every two years the Athletic Hall of Fame at the University of Northern Colorado recognizes the excellence of former players, coaches, teams and support staff.

This year Northern Colorado Athletics celebrated the 22nd Hall of Fame class with the addition of five new members on Friday, October 5, 2018. The 2018 class features four student-athletes and one coach from five different sports.

Kelley Arnold helped set the standard for Northern Colorado volleyball in the Division I era. In her four years with the Bears, Arnold was a part of three NCAA Tournament teams in 2009, 11 and 12. She earned multiple All-Big Sky honors, including the Player of the Year award in 2011. She is still the program's DI leader in kills and attacks.

Devon Beitzel left his mark as one of the best student-athletes in UNC history. Beitzel helped usher the men's basketball program into the Division I era, including being on the 2009-10 team that won 25 games, a program-best at the time. He scored 1,568 as a Bear which ranks third all-time in program history. He not only dazzled fans on the court but put in the time and commitment in the classroom to be a Lowe's Senior Class Award finalist in 2010-11.

“Knowing where I started my career at UNC, if you were to tell every one of my teammates my freshman year that, ‘that kid’s going to be in the hall of fame,’ they wouldn’t believe you,” says Beitzel. “I was going to do anything and everything I could to become the player I wanted to be. I went from being a redshirt freshman because I wasn’t able to play at the same level as the other guys on the team, to becoming a VP in the league.”

Gordon Maddux started his illustrious career as one of the most influential people in gymnastics with a strong competition career at Northern Colorado. He was a three-time all-around champion in the Rocky Mountain Conference and Regional AAU competitions over his four seasons as a Bear. He also won every individual event except side horse in the same competitions. Following his time at UNC he went on to even greater heights serving as the chairman of the US Olympics Gymnastics committee from 1960-68 and one of the first commentators of televised gymnastics events on ABC Sports. He also was featured on ABC's Wide World of Sports program.

"It’s come full circle. Two years ago I was inducted into the International Gymnastics Hall of Fame and I thought that was a huge moment. I’m the only broadcaster in there. This to me is even more important,” says Maddux. “My time in gymnastics at UNC really impacted my whole life. I learned that you have to persevere and you have to put up with a lot of hardships and you’re not always successful. That doesn’t make you a failure, but that sort of guided everything I did, and I’ve been pretty darn successful in what I’ve done since then."

Jack Maughan was a mainstay at Northern Colorado for more than 20 years, serving in the roles of head wrestling coach (1987-08), head men's golf coach (1995-03), head women's golf coach (1995-06) and Director of Development (2008-12). As the wrestling coach, he led UNC to three NCAA Championships, five runner-ups and 46 All-America performances. Maughan helped move UNC from Division II to Division I including playing a key role in the formation of the Western Wrestling Conference.

“I’m truly honored and humbled to join a very long tradition of Northern Colorado Athletics and the excellence they have and all the great people who are in the Hall of Fame. To join them is truly an honor,” says Maughan.

Nancy Steffy was a dynamic scorer during the early years of the Northern Colorado women's basketball program, helping head coach Gloria Rodriguez lay the foundation for the program. Steffy, who played before the 3-point line era averaged 13.1 points and shot over 40.0 percent for her career. She helped UNC earn winning records against some of the top competition in the area, including Wyoming, Colorado, Arizona and Arizona State. She saved her best performances for the top competition, scoring over 16.0 points against the top teams and shooting over 50.0 percent in those games as well.

“Being inducted into the UNC Hall of Fame is just an unbelievable honor. Whatever it is you’re trying to accomplish, you work hard at it, you become dedicated to that, it’s all about wanting to be the best that you can be, and it’s all do to that passion that you have for whatever it is you’re working for,” says Steffy.”

About the UNC Athletic Hall of Fame

The University of Northern Colorado Athletic Hall of Fame was established in 1994 to recognize former UNC athletes, faculty and staff members, and others associated with the University of Northern Colorado who have distinguished themselves in the field of athletics either by virtue of their performance on the athletic teams, representing the university, or by outstanding contributions on behalf of athletics.