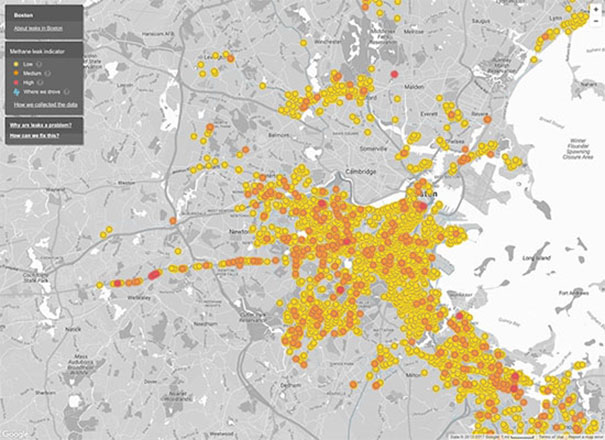 Above: Salo's work helped pinpoint gas leaks in cities, as indicated on the map of Boston above. Map courtesy of EDF, https://www.edf.org/climate/methanemaps

The results of the study, led by Colorado State University and recently published by the journal Environmental Science & Technology, is already helping cities pinpoint pipes that need to be replaced to help minimize greenhouse gas emissions.

Salo, assistant professor of geography and GIS at UNC, worked on the project as a doctoral student at CSU. She was involved in processing the raw data from the cars equipped with air sensors and developing the initial algorithms to identify natural gas leaks. Her work informed the development of interactive maps that indicate the rate of methane leaks at points in each of the cities. In Boston, for example, the data show an average of one leak for every one mile driven.

"It's gratifying as a scientist to see your research applied to real world problems and to have utility companies use that science to reduce greenhouse gases emissions and improve efficiency," Salo said.

Although no longer directly involved with the project, Salo now spearheads projects known as humanitarian mapathons that map buildings and roads in underdeveloped countries to assist in development and relief efforts.