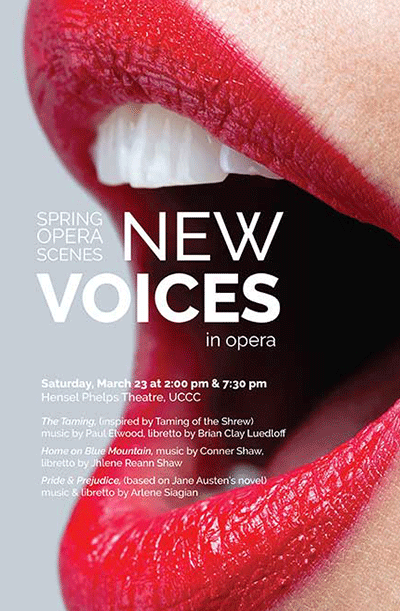 New Voices in Opera is UNC Opera Theater’s first performance of the spring season that features three new student and faculty-composed opera scenes: The Taming, Home on Blue Mountain and Pride and Prejudice. There are two performances at 2 p.m. and 7:30 p.m. on Saturday, March 23, at the Union Colony Civic Center (purchase tickets).

Inspired by Shakespeare’s The Taming of the Shrew, The Taming contains a libretto written by UNC Director of Opera Theatre, Brian Clay Luedloff, set to music by faculty composer Paul Elwood.

Home on Blue Mountain was composed by Connor Shaw based on stories of his family’s homestead in western Colorado during the early 20th century with a libretto by his sister Jhlene Raeann Shaw.

Arlene Siagian wrote the music and libretto for Pride and Prejudice, based on the beloved romance novel by Jane Austen.

Two student directors, Kaylah Hicok and Carissa Scroggins, are working with students to prepare these scenes for the stage.

Kaylah Hicok will make her opera-directing debut with Shaw’s Home on Blue Mountain. In this series of short scenes, homesteaders must struggle to overcome obstacles set forth by man and nature to produce a successful crop and make a living wage.

Carissa Scroggins is excited to return to directing after her experience working with students last year during A Handful of Haydn. She will direct two scenes from Siagian’s Pride and Prejudice, where we see the Bennet family discussing the new gentleman in town. Mrs. Bennet wants to introduce the gentleman to her daughters in hopes that he will choose to marry one of them and ease her worry about the family’s future.

Additionally, Luedloff will direct two scenes from The Taming. In the first scene from Act I, Petruchio is bidding Verona farewell as he sets off to Padua in search of a rich wife. Kate and Bianca are featured in the following scene from Act II as Kate’s teasing about Bianca’s suitors becomes increasingly violent. When the girls’ father steps in to protect his younger daughter, Kate reveals the reason behind her unpleasantness.

Keep an eye out for more events and information on casting, behind-the-scenes looks, sneak peaks and more on the UNC Opera Theatre Facebook and Instagram pages.