The UNC research has concentrated on the feasibility of developing cells capable of producing an enzyme that can convert inactive cannabis compounds into an active anti-cancer drug. 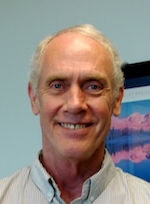 Hyslop, who's working on the project with PharmaCyte Biotech Inc., summarized the progress during presentations last week at the 253rd American Chemical Society National Meeting & Exposition in San Francisco.

Researchers to date have observed five cell lines that produce desired enzymes to convert inactive cannabis compounds into anti-cancer drugs once they're injected, using PharmaCyte's encapsulation technology, and then activated directly at the site of a tumor.

Hyslop has been involved in cancer research for four decades. UNC faculty Corina Brown and Ann Hawkinson, along with several graduate and undergraduate students, are part of the team working on the cannabis project with Hyslop.