“We Love You Madly”: UNC Jazz Lab I Competes in New York

“Remember, we love you madly.” That’s how the late jazz great Duke Ellington would end his shows. UNC Jazz Lab I lead trombone and Jazz Studies doctoral candidate Zach Rich took that phrase to heart, composing what started out as a tribute to Ellington and turned into a high-energy chart for Lab I to play at the Jack Rudin Jazz Championship, held by Jazz at Lincoln Center this January.

Lab I, UNC’s premier jazz ensemble, was one of 10 collegiate jazz programs in the nation invited by Wynton Marsalis to the inaugural event. Lab I appeared among bands from The Juilliard School, Eastman School of Music, Michigan State University and other universities renowned for their jazz programs.

UNC was one of three bands to play an original piece, and one of two to play a piece written specifically for the competition.

Sam Hesch, a senior Music Education major and saxophonist in Lab I, says it’s a great experience to play music written by peers.

“It's awesome, because it's like a part of them,” Hesch said. “You have more respect for them. And you can really encourage them. And it's also a great learning experience for the people who are student composers.”

Four UNC musicians were honored by Wynton Marsalis and the other judges for individual excellence: 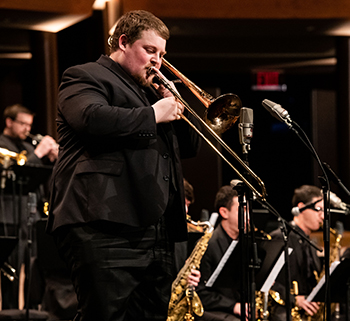 Zach Rich plays the trombone at the competition. He was honored for individual excellence. Image provided by Jazz at Lincoln Center, used with permission.

Rich agrees that the immediate feedback helps him grow.

“Dana is a real advocate for the composers here, which is really nice,” he said. “Not just me, but a lot of us get opportunities to have our music performed and recorded, too.”

“It's one of the best highs there is,” Rich said.

“It is life-changing for the students,” Landry said, telling the story of one student who chose to perform around the world on a cruise ship after playing with UNC in Romania. The New York trip was special, too.

“There were students on this trip who had never been to New York, and they got to meet some of their heroes on Monday night of our trip,” Landry said. “We went to hear the Vanguard Jazz Orchestra, which is a group that has performed since the 1960s every Monday night at the Village Vanguard, which is one of the most famous jazz clubs in the world. There happened to be a trumpet player from Los Angeles in the audience, Wayne Bergeron, who is one of the best lead trumpet players in jazz. So our students had an opportunity to meet him, as well as members of the Vanguard Orchestra.”

The Village Vanguard is the namesake of UNC’s jazz combo, the Vanguard Combo, which played on Saturday in Lincoln Center’s Appel Room overlooking Central Park and Columbus Circle.

Other highlights of the trip included working with renowned saxophonist and composer Ted Nash, networking with students and faculty from other programs, and participating in a Q and A with jazz great Wynton Marsalis.

“Whether students or faculty, everyone walked away from that inspired and thinking about the music and what their role in it is,” Dana Landry said, director of Jazz Studies and conductor of Lab I.

Landry and his faculty approach jazz with a forward-thinking lens, which impacts how students are able to succeed and move out into the world. He pushes his band to perform original student compositions, unique music, and arrangements of existing works. His philosophy, along with the family feel of UNC’s program, make UNC an exciting place for jazz, which is an inherently exciting form of music.

“I love the spontaneity of it (jazz). And the energy. There's always something new that's part of the improvisational part of it. I love the harmony and the sounds of it. The people,” Rich said. “It's not uncommon that you become friends for life after just playing with somebody or meeting them at a session one time.”

The UNC Jazz Festival will be April 23-25. To hear UNC student and faculty compositions based on Alice’s Adventures in Wonderland, titled “An Electronic Wonderland,” which features big band blended with electronic music, performed by jazz trumpeter Ingrid Jensen.