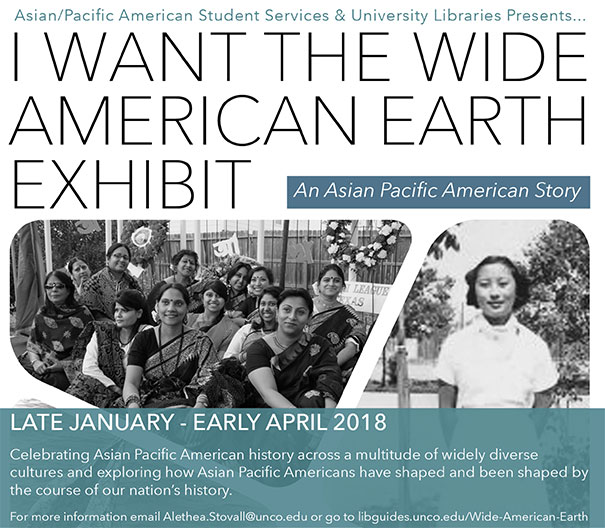 UNC's Michener Library will host a unique Smithsonian Institute traveling exhibit Jan. 29-April 8 that explores how Asian Pacific-Americans have shaped and been shaped by the course of United States history. The exhibit, located on the library's main floor, is free and open to the public.

"I Want the Wide American Earth: An Asian Pacific American Story" tells the rich and complex stories of the very first Asian immigrants, including their participation in key moments in American history: Asian immigrants panned in the Gold Rush, hammered ties in the Transcontinental Railroad, fought on both sides in the Civil War and helped build the nation's agricultural system.

Through the decades, Asian immigrants struggled against legal exclusion, civil rights violations and unlawful detention, such as the 120,000 Japanese who were interred during World War II. Since the 1960s, vibrant new communities - pan-Asian, Pacific Islander and cross-cultural in make-up - have blossomed.

Pacific Americans make up more than 5 percent of the U.S. population - more than 17 million people - and those numbers are growing. Their ancestral roots represent more than 50 percent of the world, extending from East Asia to Southeast Asia, and from South Asia to the Pacific Islands and Polynesia.

The exhibit was created by the Smithsonian Asian Pacific American Center and the Smithsonian Institution Traveling Exhibition Service, and is supported by a grant from the W.K. Kellogg Foundation.

A variety of related programming will be offered during the exhibit's stay.

The exhibit is co-sponsored by Asian Pacific American Student Services at UNC, University Libraries and the Student Senate.