University of Northern Colorado President Kay Norton announced yesterday that Theodora “Theo” Kalikow will serve as interim provost for the 2018-19 academic year, beginning in July. Kalikow served as dean of UNC’s College of Arts and Sciences and professor of Philosophy from 1984 to 1987. She brings 53 years of higher education experience, including a 20-year term as president at the University of Maine-Farmington. 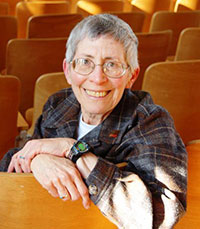 In May, after the Board of Trustees appointed Andy Feinstein as UNC’s next president, he and Norton decided to work with the Registry for College and University Presidents, an interim executive placement firm, to identify a provost for the coming year. Feinstein will launch a national search for a permanent provost in the fall.

Three candidates visited campus this week and met with Feinstein, Norton, the Provost’s Leadership Team, executive staff, and representatives from Faculty Senate, Student Senate, Classified Staff Council and Professional Administrative Staff Council. There was broad agreement among everyone who met the candidates that Kalikow is a great fit for UNC.

“Theo not only brings a wealth of experience and perspective, but also a deep appreciation for who we are and what we do at UNC,” Norton said. “It is incredibly gratifying to know that two leaders as capable as Andy and Theo are stepping in to take UNC to great places.”

Kalikow says she is looking forward to bringing her career full circle at UNC. “It’s clear that UNC has made impressive progress over the years, and I’m excited to have the opportunity to give something back,” she said.