The International Union for Conservation of Nature (IUCN) that publishes the Global Red List of Threatened Species has focused attention on a paper published by University of Northern Colorado Professor Rick Adams with colleagues Frank Bonaccorso (USGS) and John Winkelmann (Gettysburg College) to reassess the extinction risk of an African bat species. 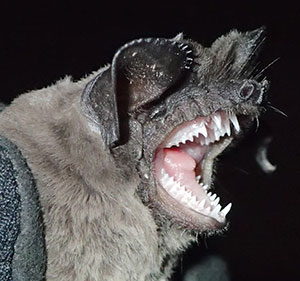 The research, published in Global Ecology and Conservation (2015) found new populations of the large-eared giant mastiff bat in South Africa and Botswana.

Adams and his team deployed bat echolocation detection instruments throughout Kruger and Mapungubwe National Parks and in a remote area in eastern Botswana, where this species had not been previously detected.

The researchers found that although the species was present, it was very rare, contributing less than 1 percent of the nearly 14,000 bat echolocation sequences analyzed for the study.

Based on Adams’ research, the IUCN has reduced the extinction risk of this species from Vulnerable to Near Threatened, but warns that habitat modification and climate change still threaten its recovery.