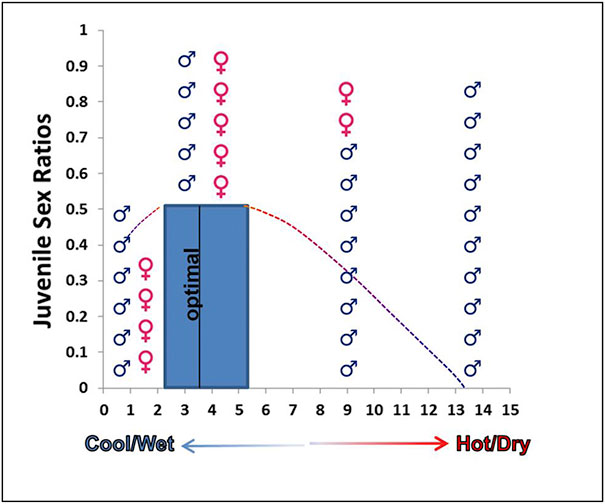 In a new study, researchers at the University of Northern Colorado have shown increasing proportions of male bats accompanied by large reductions in female bats over the last 20 years.

In the new paper published in Global Ecology and Conservation evidence is provided that shows in years where temperatures were higher and precipitation lower than average for June, July and August, significantly more male young were captured than were female young. The Colorado populations have shifted from a 60:40 male-female ratio documented in 1996 to an 80:20 ratio in 2015 and 2016.

The nearly unwavering trend towards female births began in year 2000 when drought conditions became more common in the region. Interestingly, the researchers also showed that when conditions were too cool and wet, increases in male births also followed. They concluded that optimal conditions for reproducing a 50:50 sex ratio is when summer temperatures average about 29 degrees celsius and mean precipitation is about 7.5cm. In years near these optimal conditions, equal numbers of male and female juveniles were captured.

The authors also used a logistic regression model to predict future outcomes for bats based on the 20-year data set and the expected climate warming outcomes through 2090 in the Front Range of Colorado.

“The results indicated that declines in female offspring born annually will continue and possibly accelerate unless rapid and sustained efforts are put in place to curb climate warming in the region," said lead author and UNC Professor Rick Adams. "As is, the future for the current bat assemblage in the region to persist decades into the future is highly questionable.”

The researchers also warn that bat populations are in crisis from multiple other human-caused pressures, in addition to climate warming, making the future of sustainable Rocky Mountain ecosystems, for which bats play a major role, questionable.

“Our models indicate that bat populations in the Front Range of Colorado will continue to shift towards more males followed by population declines and potential extirpation of some populations unless significant reductions in human-caused regional warming is curtailed," said co-author Mark Hayes of Normandeau Associates Inc.