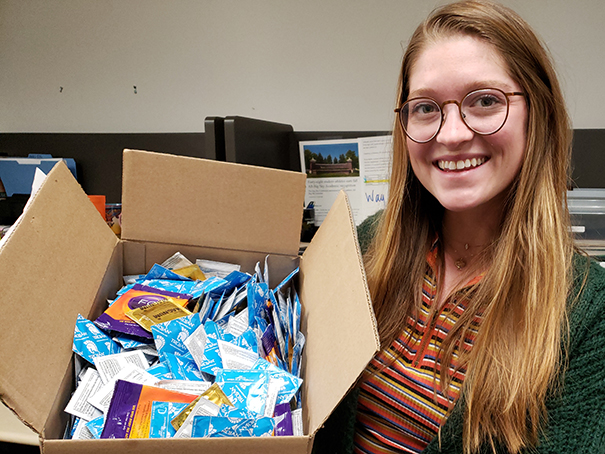 Every day, almost 25,000 young people age 15-25 are infected with a sexually transmitted disease, and the most effective way to combat this is by providing free access to and using condoms, according to the organization Advocates for Youth.

Colorado School of Public Health at the University of Northern Colorado graduate student Brianna Kelly won 500 condoms from the organization's Great American Condom Campaign last fall. Reactions to this news differ from raised eyebrows and surprise to a chuckle and curiosity, but one thing is certain: Kelly wants to bring awareness to how a growing public health issue on college campuses can be deterred by passing out condoms.

"College-aged students have some of the highest rates of STIs and pregnancy, so improving access to condoms, and different types of contraception will hopefully reduce those high rates of pregnancies and STIs or HIV," she said.

She plans on distributing the condoms at events held during National Public Health Week, April 1-7, in the UC and around campus. By partnering with Northern Colorado Health Network, Kelly is also hosting free HIV testing at 11:30 a.m. on Thursday, April 4, in Campus Commons (view a flier of all campus public health events during that week).

Watch a video interview with her to learn more:

The Great American Condom Campaign is a youth-led grassroots movement to make the U.S. a sexually healthy nation. Each year, GACC members give out 1 million Trojan Brand condoms on college campuses across the U.S., educate their peers about sexual health and organize to improve the policies that affect young people’s health and lives.