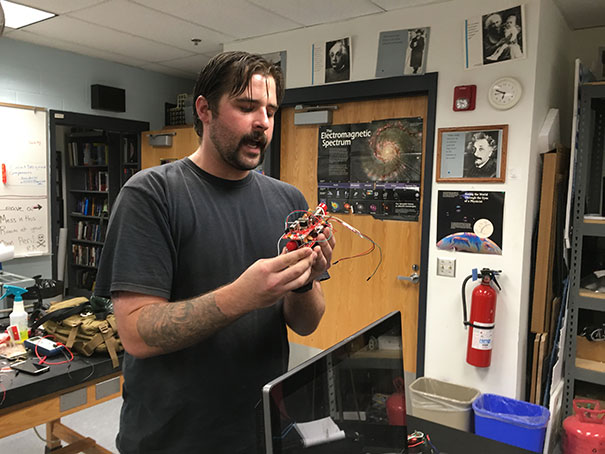 Above: John Ringler shows a component of a particle detector known as a scintillator. He and his colleagues are spending this week perfecting the device before it goes up in a high-altitude balloon during the eclipse.

A unique project conceived and designed by UNC Physics and Astronomy students will be aboard a NASA high-altitude balloon that will be launched during the solar eclipse Aug. 21.

Seniors and military veterans Josh Fender, Justin Morse and John Ringler will spend the first day of fall classes witnessing the launch from Camp Guernsey in southeastern Wyoming, which is in the path of the full eclipse. From the ground, they’ll monitor their specialized detector that, for the first time during a total eclipse, will measure muons, particles created from collisions with cosmic rays in Earth's atmosphere.

“It’s currently believed that most of these cosmic rays are coming from extra solar sources, so everything besides the sun,” Ringler said. “During the solar eclipse, we’re going to look for a change in depth when there’s line-of-sight blockage of the moon over the sun. Do we get different data? Are most of these (cosmic rays) coming from outside the sun? That’s what we’re trying to answer.” 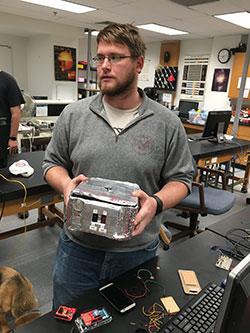 Fender holds the enclosure that contains the specialized equipment that will record muons at high altitude.

Added Fender: “What’s going to be interesting during the eclipse is the rapid change in the density (of the atmosphere) because the moon’s shadow passing over it can cause some weird effects. So that’s something else we’ll be looking at."

Their project was one of six from Colorado colleges and universities chosen by the NASA-funded Colorado Space Grant Consortium for one of the limited spots on the balloon.

“No one has measured the change in muons rates during an eclipse at high altitude,” said Fender, an Arapahoe Community College transfer who started on the project by getting the onboard Geiger counters to work at high altitude. “It’s a unique experiment.”

The seniors have spent the past 18 months, and copious amounts of time in their Ross Hall lab, perfecting the device.

“We’ve put a lot of time to try to figure out how to make this all work and just get reliable data back,” Fender said.

Their tests have included two launches — one reaching 98,000 feet — vacuum tests of their air-tight enclosure, using a 3D printed frame, to ensure there won’t be electrical shorts as the balloon reaches its expected apogee of about 100,000 feet. They also made several refinements to the enclosure containing the device and the micro SD card recording the data to protect the components from a hard landing. On the way down, the balloon can reach a speed of Mach 1 before the parachute deploys, Fender said.

An additional challenge: the payload itself had to stay under NASA’s required 1.3 kilograms (or 2.8 pounds) – requiring the students to shift from using PVC to a lighter plastic.

“The students have done a very good job of not only dealing with the challenges of this but also working with actually trying to improving their designs and trying to come up with better ways to do this,” said Assistant Professor Charles Kuehn, who advises the team, along with colleagues Cynthia Galovich, Matthew Semak and Robert Walch. “We try to be as hands-off as possible. We’re there for support for ideas for things like that, but for the most part we really want the (message to) students (to be), ‘this is your thing.’”

Following the launch, the students will compile results, write an academic paper and will be able to present their findings at next year’s American Astronomical Society meeting, which happens to be in Denver. They’ll also publish a how-to guide for high schools and others interested in pursuing such projects on a small budget.

“This is the coolest stuff in the world,” Ringler said. “We get to play around with electronics, we get experience doing engineering of electronic and structural circuits and we get to measure things people haven’t measured before. It’s just doing science.”

Related: Podcast with Charles Kuehn on solar eclipse,
and how his students are going above and beyond the field of atmospheric research