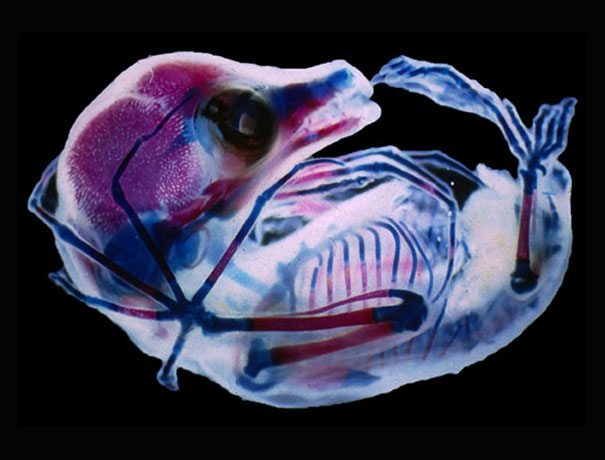 A stunning image of a bat fetus produced by University of Northern Colorado Professor Rick Adams is circulating widely online after placing 15th out of 2,000 entries submitted from 88 countries in Nikon’s annual Small World contest.

The contest’s top 20 photographs have been featured in the international media, including The Daily Mail, The Washington Post, The New York Times, Bing.com, The Atlantic, YAHOO Sports, The Guardian, Greenwich Sentinel, and many more. His photograph will also be part of the Nikon Small World Exhibition that travels to museums and art galleries.

Adams, a foremost authority on bats, took the photo using an Olympus dissection microscope with an Olympus digital camera. He used red-and-blue dyes on the third-trimester fetus of the flying fox fruit bat. He then removed the pigmentation with rubbing alcohols to produce a see-through specimen similar to a 3-D, color X-ray. The backlighting technique he added is called “dark field” photomicroscopy.

“This is part of a study on the development of wings in bats as a surrogate for understanding how a ‘standard issue’ mammalian embryo evolved wings, giving rise to bats 55 million years ago,” Adams said.

Adams’s artwork has previously been featured on the cover of the Journal of Anatomy and in his award-winning book Bats of the Rocky Mountain West and on the cover of his 2013 book, Into the Night.  For previous research, he used high-speed video cameras to discover that bats flap their tail membrane like a wing to produce potentially important thrust during takeoffs and a very recent article in PLoS ONE (2017) showed that flying fox fruit bats walk and climb like primates, thereby distinguishing them from other bats and bringing into question their previously designated evolutionary origin.