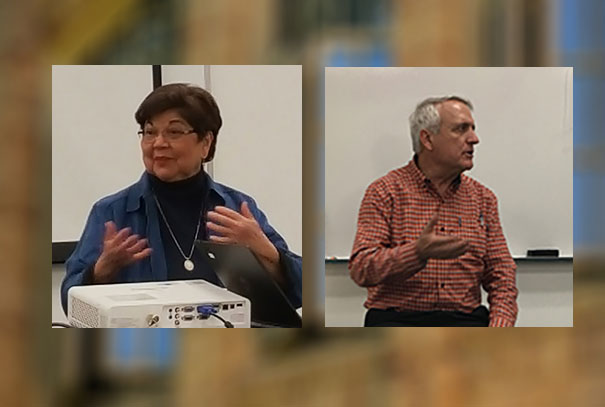 "I have had this passion for human rights and civil rights since I was a little girl," said Baca, who grew up in Greeley before embarking on a political career that would include serving in both the Colorado House of Representatives (1975-78) and the Colorado Senate (1979-1986), making her the first Latina in the United States to serve in both chambers of her state legislature.

Before serving as Colorado's governor from 2007-2011, Ritter held a position in the United States Attorney's office and was Denver's district attorney from 1993-2005. As DA, he created one of the nation's first drug courts and worked extensively on the prosecution of sexual abuse and domestic violence cases.

He currently is director of the Center for the New Energy Economy at Colorado State University.

"I have always asked that we invest in protective factors for people rather than supporting the attitude of getting tough about risk factors," Ritter told the students. "I encourage people to be critical thinkers and consider the bigger picture."

The Center for Urban Education, located in the UNC Denver Center at Lowry, offers a bachelor's degree program that prepares students to be elementary, special education or early childhood teachers in contemporary schools and provides the opportunity for students to immediately apply what they learn in their college courses. Throughout the four-year program, students spend weekday mornings in K-12 classrooms as part of apprenticeships that are supervised by veteran teachers.