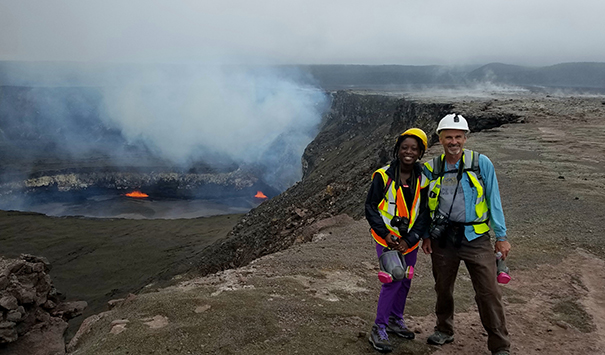 Volcanologist Steve Anderson, a professor in the Department of Earth and Atmospheric Science at the University of Northern Colorado, knows volcanoes and is especially familiar with the ongoing Kilauea eruption in Hawaii where he's received lots of attention from the press including an interview with Discovery Channel's Daily Planet magazine.

Anderson answers some questions about recent developments with Kilauea, his love of volcanoes, and future volcano research plans.

Above: Dr. Anderson poses with UNC graduate student Davitia James in front of the Kilauea lava lake in April. Since then, the lava in the lake has dropped 500 meters, allowing groundwater to pour into the lake and triggering huge explosions. 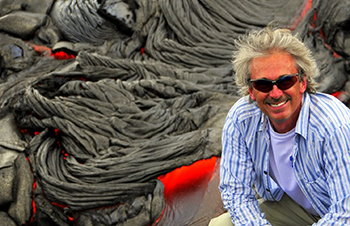 "How long have you studied the Kilauea volcano and its surrounding areas? Specifically, what areas are you keeping an eye on or are most interested in?"

I first started studying the Kilauea volcano in the early '90s. All my work at Kilauea involves looking at the surfaces of active lava flows and lava lakes and understanding what those surfaces reveal about the volcano’s behavior. From there, we can look at older lava flows and learn more about past eruptions.

There are two areas that are erupting at Kilauea:

1. Lava flows are emerging from developed, large cracks in a subdivision near the coast; and
2. Explosions from the summit where a lava lake has dropped below the water table. 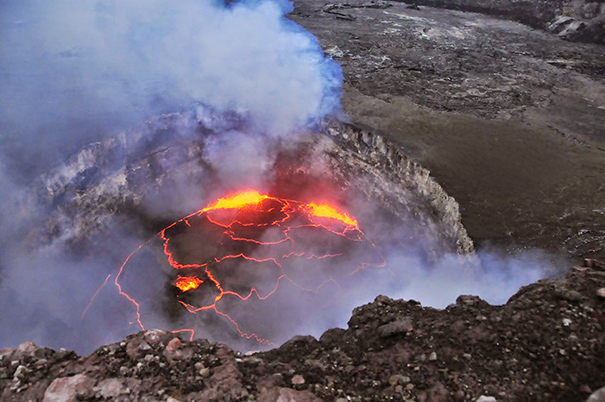 Above: View of the lava lake at the Kilauea Volcano in Hawaii. The crater is the size of the Mile High Stadium in Denver! Photo courtesy of Anderson.

Two of my former graduate students studied the lava lake for their master’s theses, and my current graduate student is studying older lava flows that erupted in the early '70s. We returned from Kilauea in early April.

"Is the worst of the eruption over, or are further eruptions, explosions and earthquakes expected from the volcano?"

The recent activity is only one phase of the eruption that's been ongoing since the early ‘80s. Even though we can't predict short-term, future occurrences, it’s unlikely for the activity to suddenly stop. There’s no way of predicting how long the latest phase will last, but we can expect more lava flows near the coast, more explosions near the summit, and more earthquakes.

"What has surprised you the most with the Kilauea eruption?"

The most surprising thing that has happened so far is that some of the lava’s chemistry make-up is unusual, and the folks that study lava chemistry are not sure what it means.

As a scientist, it is always fun when sudden, unexpected events occur because those surprises challenge you to think differently about what you’re studying.

"How are you and your team studying this volcano?"

• Adam used a laser mapper system, called LiDAR, to study the growth of the summit lava lake and crater.
• Amy used artificial intelligence to study the thermal patterns on the lava lake. 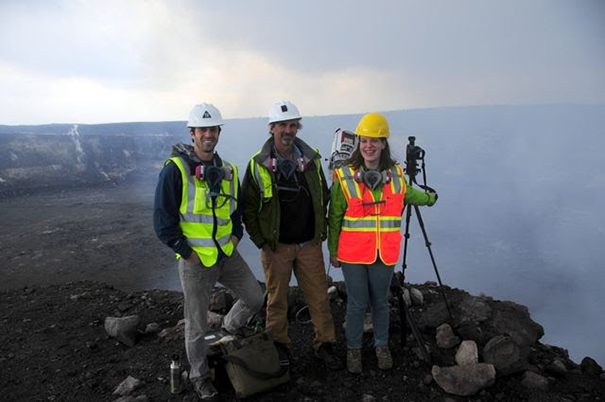 One of my favorite things about volcanology is that I learn new approaches and how to use new equipment every time I start a new project. Since most of my past work was funded by NASA, I’m also able to extend these Hawaii studies to other planets, so I use the NASA rover and orbiter data, as well. With each new approach, I meet new scientists who specialize in the work so I continuously learn new things!

"Elaborate on your NASA grants and projects."

"What’s your favorite part of researching Kilauea? Have you ever been in danger or injured while in the field?"

My favorite part about studying Kilauea and other active volcanoes is that I’m able to see volcanic activity at close range, which very few humans get to experience: I've watched lava flows pour on to the ground in Hawaii and Italy, lava lakes in Chile and Hawaii, and I've studied bigger volcanic explosions in Russia, Indonesia, Guatemala and Italy.

I love the travel, I love working with smart people, and I love watching the Earth display incredible power. Luckily, I've never been hurt on a volcano, but some of my colleagues have been. I've lost one colleague and friend to an explosion in Japan. It can be dangerous, but I try to limit my time in dangerous situations as best I can. It's just part of the job and something I accept.

"Do you plan on returning to Kilauea?"

I’m in Spain for two months walking 500 miles with my wife on the Camino de Santiago! Later this fall, I'm planning to return to Kilauea with one of my undergraduate research students to start a new project on the lava lake; we might make some alternate plans depending on how the eruptions play out over the next few months.

"What inspired you to become a volcanologist? What future research are you planning?"

During my senior year of college, I had an internship at Mount St. Helens in Washington while it was still active. For a kid from the flatlands of Wisconsin, it was so amazing that I wanted to study volcanoes as much as possible even though there aren't many jobs available in the field. I studied active volcanoes as a graduate student at Arizona State University and was able to travel to some amazing eruptions during that time. I decided to become a professor to continue working on volcanoes and teach others about geology. I've never wanted to do anything else. 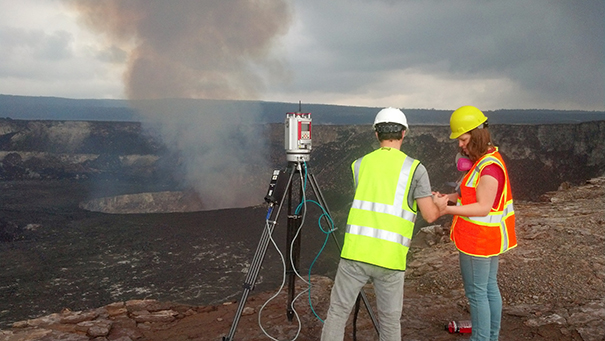 Above: Anderson's former UNC graduate students Amy Burzynski and
Adam LeWinter set up a a laser mapper system, called LiDAR, to study the growth
of the summit lava lake and crater. Photo courtesy of Anderson.

Along with my plans of returning to Hawaii this fall, I also want to start a new project in Chile in early 2019. Opportunities seem to pop up for me. Most of the volcanoes I've studied have been spur of the moment occurrences. I have many colleagues around the world who occasionally ask me to collaborate on a project, and I rarely say no because most projects are too interesting and too much fun to pass on.

"Are you or your team submitting new research for publication?"

I have around five other projects that will be completed over the next couple of years, so I’ll continue to be busy with research, travel and many other things.