A new installation at the University of Northern Colorado gives new meaning to the term sunflower.

The artificial plant placed at the corner of 14th Avenue and Reservoir Road is bound to get noticed as the university continues to reduce its carbon footprint with innovative approaches.

Nicknamed the Solar Flower, the device was installed on the front lawn of UNC’s César Chávez Cultural Center last month and provides 2,500 watts of power to meet the majority of the center’s needs. . The life expectancy of the Solar Flower is 25 years and will generate a total of 125,000 kilowatt-hours (kWh) during that time, which is 5,000 kWh per year.

Mimicking a blooming flower, it automatically opens its circular array of solar panels and tracks the sun throughout the day for maximum exposure. It is designed to close in case of threatening weather to protect the solar panels, such as wind speeds over 30 miles-per-hour. When closed, small brushes clean the panels to ensure dust and other particles don’t decrease efficiency.

Watch a timelapse of the Solar Flower in action:

UNC’s Student Leadership for Environmental Action Fund (LEAF) committee, made up entirely of students, led the effort to select and purchase the Solar Flower to “reduce our campus’s carbon footprint by utilizing renewable energy and offsetting our fossil fuel emissions,” said Emmy Scott, a junior double-majoring in Environmental and Sustainability Studies and Business Management as well as Student LEAF’s grant coordinator.

The Chávez center was chosen because of the building’s size and location that provided accessibility for the installation and visibility for the community to learn more about solar energy.

“I believe UNC is the first university to have a SmartFlower west of the Mississippi, but definitely in and west of Colorado,” said Patrick Honegger, owner of Green Force Electric who installed the device. “Outside of being sustainable, UNC’s involved in showing people what solar can be and how it can look.”

The project was funded through student fees that are automatically allotted to Student LEAF ($1 per enrolled credit, and up to $10 per student per semester). View other projects that were initiated through Student LEAF.

“The overall goal with the project is to offset the energy that the Chávez center uses with renewable energy, while encouraging and empowering students to learn about transforming campus with innovative technology, such as the Solar Flower,” said Scott.

The Solar Flower is the latest in a number of solar projects initiated at UNC. Sustainability has a long history on campus that has largely been driven by students, faculty and staff. Other initiatives at UNC include: 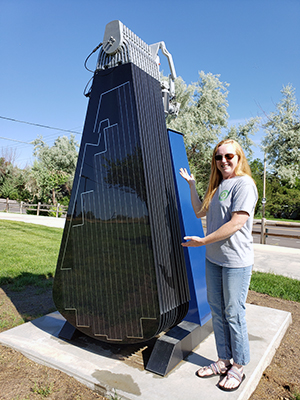 In the near future, all of UNC’s solar-powered systems will automatically feed data into an online dashboard that will be used to see actual energy generation as well as in meteorology, physics and sustainability classes.

The students involved in writing the original proposal include: UNC graduate Katie Fletcher, former Student LEAF grant coordinator; Marie Lee, former Green Team director who led the effort in planning the installation in 2018 (image at right); and Scott, who wrote the official proposal for the project. Tom Giggy, supervisor in the UNC Utility Systems Conservation’s Electrical Shop, the UNC Landscaping and Grounds Department, and the rest of the installation team were also involved in this project’s success.