Support the Dreams of Student Athletes Like Savannah Smith 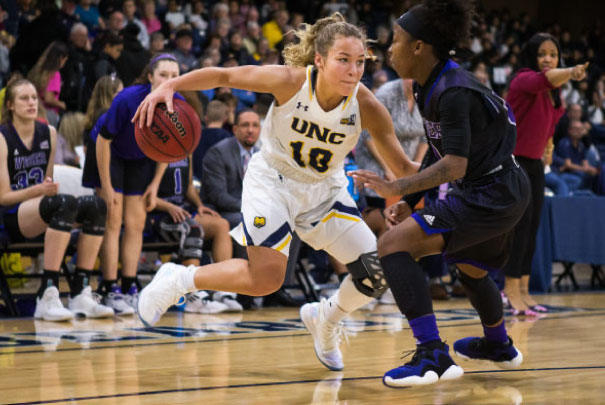 It’s been another historic season of success for the UNC Women’s Basketball team, thanks in large part to senior standout Savannah Smith.

Racking up more than 1,900 career points so far, Smith handily passed the all-time scoring record of 1,891 set by her former teammate D’shara Strange. She's also been named Colorado Sports Woman of the Year for College Basketball among numerous other accolades.

It’s the kind of season any senior would dream of. In fact, it’s something Smith has been dreaming of since she was a little girl.

“Growing up, I came to watch all the girls’ basketball players and volleyball and soccer, so I think it’s really cool to grow up and be just like them,” Smith says.

Thanks to a lot of hard work, determination and the support of a scholarship, Smith is now living that dream.

“Basketball has been a huge part of my life. It’s probably the reason that I was able to come to college,” Smith says. “I received a scholarship to attend UNC, which is a really awesome thing. You don’t really understand how amazing it is until you hear lots of stories about other people who have to pay off lots of debt after school. It’s a huge blessing to be able to have that scholarship.”

You have the opportunity to support the dreams of young female student-athletes who aspire to be just like Savannah Smith one day. Make plans to join us for the 11th Annual Women’s Walk this April to connect with student-athletes, coaches and other UNC supporters during this fun, family-friendly event.

“It’s really important for people in the community to come and see what hard work and determination looks like and really building up an awareness in our community that we can be moms, we can be wives, we can work and we can play sports,” says head Women’s Basketball Coach Jenny Huth. “Sports gives these women so much confidence. They learn resilience, they learn teamwork and they learn so many life lessons.”

Can’t be here in person? Register as a Cyber Walker and participate in the Women’s Walk wherever you are! Spread the word on social media using the hashtag #GoUNCBears.

Your support of the Women's Walk has a tremendous impact on UNC female student-athletes. Watch this video to hear more from our women's volleyball team on what it means to be a UNC Bear.