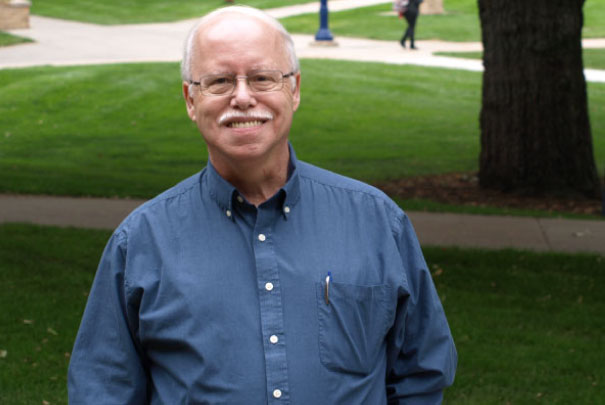 Retired history teacher Patrick Healey has always had a passion for performing arts. During his 30-year career as a teacher at Pawnee School in Grover, Colo., Healey continually made an effort to bring students to the College of Performing and Visuals Arts events at the University of Northern Colorado. After retirement, Healey moved to Greeley so he could attend UNC performances and events even more frequently.

In 2005, Healey attended a UNC performance at the Union Colony Dinner Theater in Greeley and says he will never forget the conversation he had with a student named Jonathan.

“I learned that there aren’t as many scholarships for people in theater,” Healey says.

It was at that point Healey decided to help, so he started the Patrick E. Healey Musical Theatre Scholarship to encourage students to pursue performing arts and help relieve their financial stress.

Since the scholarship was established in 2006, Healey has stayed in touch with many of his recipients, always offering encouragement. He says, understandably, many out of state families cannot attend every student performance, so he happily serves as a stand-in and has become accustomed to hearing, “You come, as my family can’t.”

“There are so many talented students and faculty—it’s a pleasure for me to get to know so many,” Healey says.

Healey looks forward to supporting students well into the future and he even hopes to increase the impact of his philanthropy. That’s why, this past summer, Healey
decided to include UNC in his estate plans with a planned gift.

“Pat’s support over the years has changed the lives for a number of students, not just financially but also emotionally,” says Ben Barnhart, Assistant Vice President of Development. “Hearing him share stories about his connection with past scholarship students and how they still stay in touch is truly remarkable.”

As Healey reflects on those relationships and the impact he’s had on these students, he can’t help but smile. Healey looks forward to many more UNC productions to come, and as he watches those students on stage, he sees a bright second act that he’s proud to play a part in.