Killing the Coronavirus, One Disinfected Doorknob at a Time

Maintaining UNC’s buildings and grounds is a behind-the-scenes job, crucial for the smooth running of the university but often unnoticed until something goes awry. When COVID-19 hit, though, the quiet role of UNC’s Facilities staff became more crucial than ever — and they stepped up with aplomb.

One morning in early July, before most academic offices of the university open at 8 a.m., Parsons Hall is fairly quiet. It’s home to the University of Northern Colorado Facilities Management team, and the first shifts are already hard at work, many of them spread across campus, cleaning, moving, repairing and disinfecting. In Parson’s, there’s a paper coffee cup taped over a drinking fountain with “Not in use” written on it, a reminder that things are not quite normal in summer of 2020 as the new coronavirus continues its spread across the United States.

On that particular morning, Shaun Herrera’s crew is on moving duty, hauling thousands of pieces of furniture out of classrooms, offices and open spaces to make room for a fall of social distancing. Herrera’s crew shows up west of Butler-Hancock Athletic Center, wearing masks and dollies. Athletics staff and athletes start walking in for morning workouts (this was before a COVID-19 outbreak halted practices) as Herrera’s crew wheels stack after stack of classroom chairs onto a flatbed. The lift on the back of the truck floats up and down, up and down.

It’s calm and quiet, with few words exchanged at first, the jokes ramping up as the morning wears on.

“Where you going?” one worker asks, as his colleague leaves a stack of chairs behind on the lift.

They max out the back of the truck, then head to Bishop-Lehr Hall to store the chairs in the empty building. And then, on to the next task. 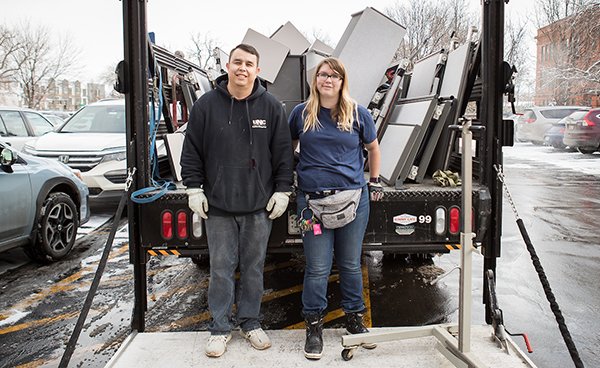 Shaun Herrera and Katrina Jones work on campus in early 2020. 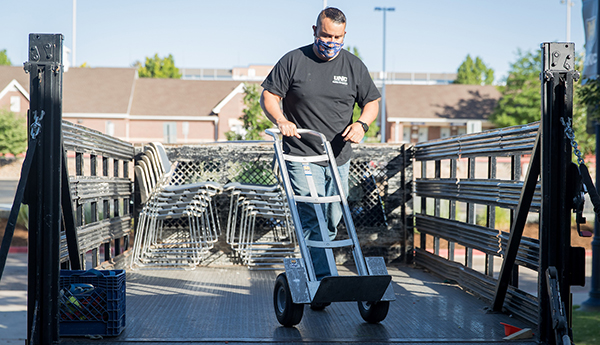 In order to create room for social distancing in classrooms, Custodial Services Supervisor Shaun Herrera loads chairs from Butler-Hancock Athletic Center onto a truck to move to Bishop-Lehr Hall. 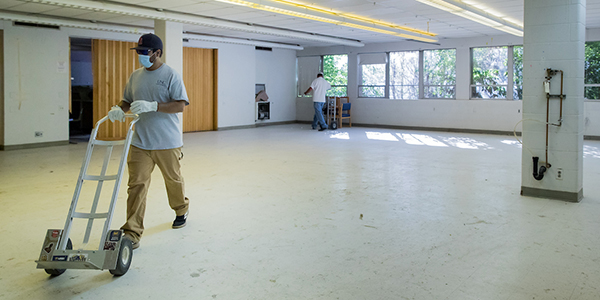 UNC’s Custodial Services oversees the cleaning and setup of all UNC’s buildings, as well as setting up and tearing down large events such as commencement. Steven Abbath is the manager of Custodial Services, overseeing a team of up to 88 people fully staffed. Abbath also oversees card access to UNC’s 50 or so buildings, making sure that the proper staff can access the buildings while also keeping the occupants safe and building contents secure. Facilities staff work in shifts, with the first starting around 6 a.m. and the last ending around 2:30 a.m.

“It's not an easy job,” says Kimberli Clock, an evening shift supervisor with more than 26 years of cleaning experience. “It's actually a very physical, taxing job. But I think they [UNC’s custodians] do a very good job, and their concern is the students and making sure that we’re all OK.”

As a young mom, cleaning gave Clock a schedule that allowed her to prioritize her children, and she’s cleaned ever since, using it as a way to clear her mind. She uses her background to empathize with whatever her staff members may be dealing with, calling her people her top priority. She’s quick to call out their excellence and voice her appreciation, as is Abbath and evening shift supervisor Erica Preston.

Custodial work, Clock says, involves work “that other people never see until it's not done.”

With COVID-19, however, invisible work is potentially lifesaving.

Erica Preston is a supervisor who started at UNC as a “C1” (entry level custodian) in 2014, working her way up through C2 (lead) and then to her current C3 shift supervisor role in November 2019.

On a typical night overseeing all the buildings on Central Campus, Preston and her crew disinfect restrooms, reset classrooms, take out trash and recycling, and provide a clean and safe atmosphere for the students, faculty and staff the next morning. Sometimes, Preston says, they walk into a room and wonder what happened during the day — “Did they have a pizza party in here? Or did they have three pizza parties?” — and then manage their limited time accordingly, always rewarded with the satisfaction of clean buildings and a job well-done. 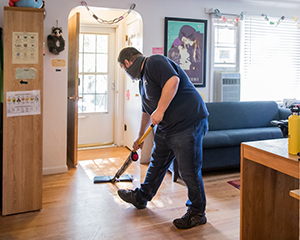 In January, Facilities and Environmental Health and Safety started noticing information about an illness spreading on the other side of the globe.

“By March, we were sensing that it was near,” Abbath says.

Facilities pays special attention to disinfecting high-touch areas during cold and flu season anyway, Abbath says, and a few times a year need to respond to Student Health Center requests for more aggressive cleaning due to a more contagious illness showing up on campus. In March, Abbath and his colleagues started checking PPE and disinfectant stock levels, tracking the supply chain, and reviewing their typical processes.

As UNC started sending students, faculty and staff home for remote learning and work, the Facilities staff stayed on campus, with some adjusted schedules due to lower building occupancy. They continued cleaning, especially in housing where students still lived, and walked through closed buildings to check for leaks and unlocked doors and the like. UNC provided hazard pay for April and May, and Abbath says those who needed to stay home for childcare, health reasons or other concerns were able to “make the right decision for them” thanks to the Families First Coronavirus Response Act provisions.

At that point, Preston was still pretty new to her role.

“I have learned so much more than I thought I ever would,” she says. “We really didn't know what to expect with this. And our world as a whole was very thrown off by this. The plans that UNC has put together, I think we've done pretty good.”

Disinfecting has played a central role in the virus response, Preston says. UNC uses a disinfectant called Virex-II (a product also used in healthcare facilities), which is bactericidal, viricidal and fungicidal.

“It doesn't matter if you have two people on a building or 2000 people in a building,” Clock says. “They walk through the door, and you don't know where they've been or what they've touched, and it's our job to continually make sure those buildings are safe.”

“I don't think that people realize how often they touch something and touch their mouth or their nose or their eyes,” Preston says, emphasizing that at this point, her team disinfects pretty much every surface you can name.

Preston has worked in cleaning for her whole career, so she’s always been aware of the cleanliness of public surfaces. She keeps a basket of masks by her door for herself and her family, and hand sanitizers in their cars. 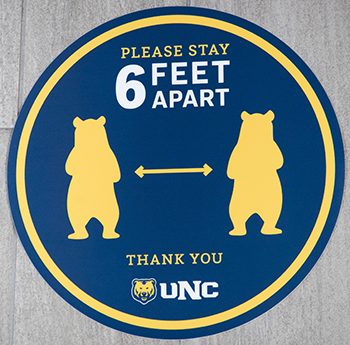 It’s a reminder that cleaning alone won’t keep UNC safe — the whole community has to do their part, as Clock reiterates — even though Clock says wearing masks is sometimes the most challenging part of the current guidelines to get used to.

“I truly believe it is a community effort,” Clock says. “For all of us, truly. We have to, each and every one of us, do our part, and our team is willing to do their part and ready to do their part.”

In preparation for the fall, Abbath says, Facilities has been doing typical deep-cleaning summer routines, with additional tasks made possible by emptier buildings. They’re also managing scheduling and rotations for the fall, when health guidelines will add more work (for example, cleaning restrooms hourly in the dining halls).

“There's not an entity on campus that is not being challenged at this point,” Clock says, bringing attention to both faculty and especially behind-the-scenes workers across campus who are all working hard with tough financial constraints and stress. She points out the interdependence of all the folks on campus, both the ones still on campus and the ones sent home. “Everybody is under the wire and under the pressure of trying to meet these guidelines.”

But UNC’s people are pulling it off. Abbath speaks of his staff’s flexibility, adaptability and willingness to jump in wherever needed. He might tell Herrera’s crew that he wants 10,000 pieces of furniture moved. Their response? “OK, do you want that done today?”

“I met a lot of great people at UNC, whether it's been students or professors or my coworkers,” Preston says. “In general, worldwide, I think people are a little nervous about their jobs and stuff, but I don't think there's as good a place that I want to be right now.”

When the students come back, UNC’s Custodial staff will be ready.

“I'm ready for them to be back just so we can have some sense of normalcy and get our routines back,” Preston says.