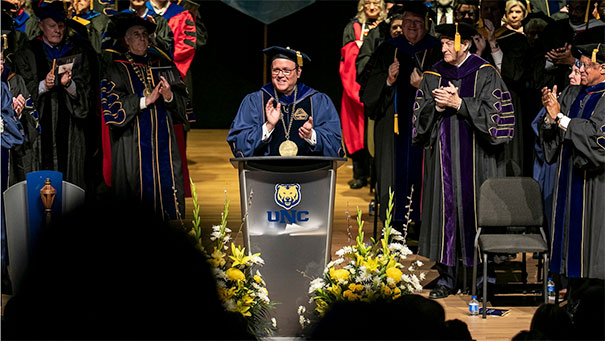 A traditional ceremony Friday officially welcomed Andy Feinstein as the 13th president of the 130-year-old institution.

During the Presidential Investiture, Feinstein spoke in the new performance hall at the Campus Commons. The 600-member audience included UNC trustees, former UNC presidents, presidents and former presidents of colleges and universities across the country, and local and state officials.

“Today is not only about recognizing leadership transition and celebrating the university, it’s also officially opening the Campus Commons and this magnificent theater,” Feinstein said.

Feinstein shared stories about his journey to UNC, recognizing his family, friends, mentors, and former colleagues who supported him along the way. He reflected on UNC’s history and transformation to a “multi-dimensional, comprehensive research university” from a school founded in 1889 to prepare teachers.

“Today, UNC ranks among America’s top universities for fueling the upward economic and social mobility of its students,” he said, adding that half of UNC undergraduates are the first in their families to go to college and about a third are students of color.

In addressing present-day challenges and the university’s future, he also acknowledged “painful but necessary steps” that will allow UNC to eliminate a $10 million structural deficit by 2021.

“I want to thank the campus for investing enormous time and energy in this very difficult task,” he said.

The implementation of a strategic enrollment and success plan, which builds on the work of task forces convened last fall, and the creation of a division of student affairs are currently underway.

Next fall, “we will invest considerable time reaffirming our values and considering existential questions about UNC’s long-term future,” he said. “UNC has a rich legacy of excellence in teaching. Research. Learning. Exploring. Serving. We now are poised to build on that legacy, and it will take all of us.”

A video recording of the ceremony is available here.

A transcript of Andy’s speech is here.

More photos of the ceremony here.