Study of Immune Response Could Lead to SARS-CoV-2 Treatment

UNC faculty researcher Ann Hawkinson, who studies virus-host interactions in animals and their immune response during infection, says a vaccine is not the only thing being developed in response to SARS-CoV-2, the virus that causes COVID-19.

While vaccines aim to prevent infection, we also must think about how to treat those who do end up contracting the disease. One potential option for treating the serious respiratory virus responsible for this global pandemic starts with examining immune gene modulations in animals that show no symptoms of a virus despite being infected. 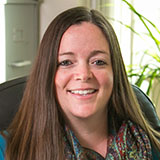 Hawkinson herself researches virus interactions in deer mice and Jamaican fruit bats. She said it’s quite common for wild animals to be “reservoir hosts” of viruses, a situation in which they are infected, yet do not experience disease.  In some cases, humans can contract a virus from the animal reservoir host directly or through an intermediate host that transmits it to humans. MERS-CoV, another coronavirus that caused an outbreak in 2012, serves as an example of that chain, with evidence of human transmission from camels that had previously contracted the virus from bats.

Current research overwhelmingly supports bats being the reservoir hosts of many viruses including coronaviruses such as SARS-CoV-2.

“Bats are absolutely amazing in that have the ability to host all kinds of viruses, they’re susceptible to infection, and they don’t show any signs of disease,” Hawkinson said, noting not only their vital role in the ecosystem providing insect control, pollination, and seed dispersal among other things, but also the importance of studying them and their immune systems. “What we can do is learn from them (and other reservoir animals) to determine how their immune systems behave during infection, and then try to apply what we learn to human treatments for disease. Their immune systems do something we do not fully understand as the virus replicates in the body.”

In the case of deer mice, they can be asymptomatic reservoir hosts of flaviviruses and hantavirus. Hormones known as cytokines, play a key role in regulating the immune response during an infection.

“What appears to be happening in deer mice during a hantavirus infection is there’s an initial antiviral response and then the body turns it way down, it modulates it,” Hawkinson said. “With human infection of some flaviviruses, and especially Sin Nombre hantavirus, the body’s immune response overreacts, creating a cytokine storm.” Research has also provided evidence of such cytokine storm happening in SARS-CoV infection in humans.  “It would not surprise me to hear that this is the case in COVID-19 cases as well.”

Hawkinson said there are seven known strains of coronaviruses that can cause disease in humans. SARS-CoV, MERS-CoV and now SARS-CoV-2 (COVID-19) are the three that can cause disease ranging from mild to severe acute respiratory issues in humans while the others produce nothing more than the common cold. SARS-CoV-2 is actually very closely related to the virus that caused the SARS outbreak in 2002, she said. Though the symptoms are similar, the initial response by world health officials to SARS-CoV in 2002 likely contributed to better containment.

While development of coronavirus vaccines remains vital, an important piece of the puzzle is also continuing to research immune system responses of animals unfazed by the viruses so that we may develop effective treatments for people that do become sick. This is tricky, of course, with a fair amount of trial and error and sustained investment needed.